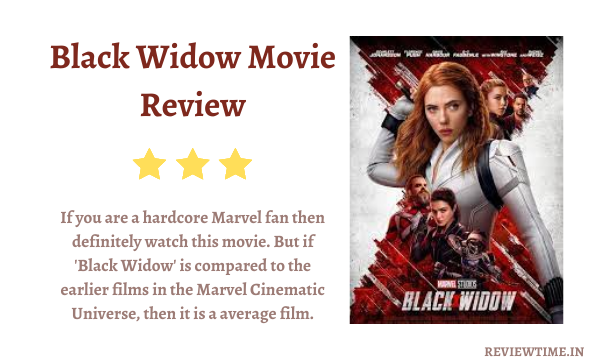 Marvel Cinematic Universe, Started with ‘Iron Man’ in 2008 and is running till now. Now the 24th film of this universe has been released, ‘The Black Widow‘. After a lot of delays, the film was released in India on 03rd September. That too on Disney Plus Hotstar. Perhaps the first Marvel film to be released directly on the OTT platform. However, in the US, the film was released in theaters and on Disney Plus simultaneously. Who would have thought that the Marvel movies that Martin Scorsese called ‘theme park rides’. One of them will directly reach your screens. We also watched the film to know how this film tells the story of Natasha Romanoff i.e. Black Widow. Let us know what was good in the film and what was not.

Just remember ‘Captain America: Civil War’ which came in 2016. Where the government tries to bring the Avengers under its control under the Sokovia Accord. Captain America and the team do not believe this and all of them are declared fugitives for the government. Black Widow was also included in the captain’s team. The movie ‘Black Widow‘ begins with the same note. Government agencies are trying to catch Widow. To avoid them, she changes continents. Changes her present. And finds herself standing in front of her past.

Marvel’s films have dropped hints related to Natasha’s old life. Like 2012’s ‘Avengers’. In the climax of the film, Natasha and Hawkeye stand in front of an army of aliens. Natasha then tells Hawkeye that it is like Budapest again. Hawkeye replies that now you remember Budapest quite differently. What was Natasha’s connection to Budapest? He will know by watching ‘Black Widow‘. After watching ‘Black Widow‘, I watched that scene of ‘Avengers’ again. The best part was that in that scene, Natasha’s character has pronounced Budapest. He also pronounced the same in ‘Black Widow‘. Meaning there is no difference. This is the detailing of Marvel’s films. Now let’s talk about the good and bad aspects of the film.

Is this an original story?

An attempt was made to present ‘Black Widow‘ as the original story of the character. But such is not the case. With a runtime of 2 hours 13 minutes, the film tries to capture the past life of Natasha only for the first 13 minutes. Under an experiment, Natasha and many children like her are transformed into trained killers. Their mind is controlled. Natasha walks out of her old life. But with a reg. Which you will know only after watching the film. But the worst part was that the film touched only superficially on the reason for his regress.

The film did not delve deeply into the life that Natasha was running away from till now. Worked to cover the story only through dialogues. Which gets tiring after a point. And also takes away his emotional depth from the character. Makes it a poster visible from above. It would not be wrong to say that ‘Black Widow‘ did not do justice to the back story of its main character. But it is not that the writing of the film should be rejected outright.

My favorite thing about Marvel movies is the detailing. Which is worked closely in almost every film. Happened in ‘Black Widow‘ as well. Explains an example. This story runs after ‘Captain America: Civil War. Which came in 2016. It can be assumed that the events of ‘Black Widow‘ also happen in 2016 itself. Natasha is driving in a scene. A song is playing in his car at a low volume. Sia’s ‘Cheap Thrills. This song came in 2016 and became a chartbuster. Through the song, this point in the story has been established that when it is happening. Not a great discovery in respect of this point story. But it is nice to see when the makers do not take their audience for granted.

Best Thing about the Movie:

Scarlett Johansson has reprised the character of Black Widow in the film. Apart from him, Florence Pew, David Harbor from ‘Stranger Things’ and Rachel Vice from ‘The Mummy series are also in major roles. Everyone has done a good job. Meaning the script did not have the scope to do something ‘out of the box on the acting front. Still, the work of the lead actors was fine. The star cast of the film is not his strongest side. The factor that stands out on top is its action sequences. Action scenes are usually created in superhero films with heavy VFX. We are not talking about such scenes here. We are talking about the fight scenes with ‘Hand to Hand Combat’. Well choreographed.

Whether it is the scene of Natasha fighting with her sister or the upcoming fight scenes, everyone works to keep them engaged. But I wish the same could be said for the writing of the film.

If you are a hardcore Marvel fan then definitely watch this movie. But if ‘Black Widow‘ is compared to the earlier films in the Marvel Cinematic Universe, then it is a very average film. Especially when you have seen a movie like ‘Black Panther’. Told you the essence of the story. Rest as you wish.

And yes, like most Marvel movies, there is a post-credits scene here too. So don’t stop the film as soon as the credits roll.