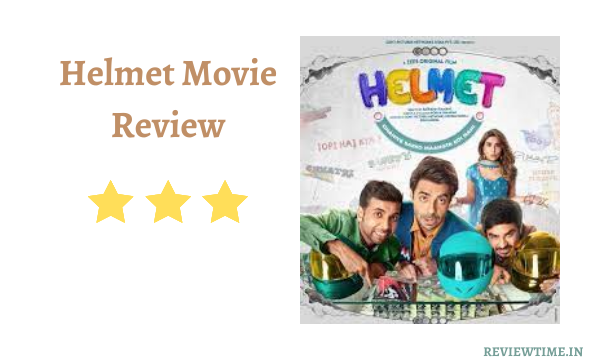 A comedy film has been released on ZEE5. The name is ‘helmet‘. As a leader, this is Aparshakti Khurana’s first film. In today’s review, we will know how much power is in ‘Helmet‘.

‘Buying condoms is a national problem in our country’. This dialogue uses the character of Aparshakti in one place in the film. Hearing which it seems that even after five years a film is made where this line is used, then it will not look old. Imagine yourself before calling us negative or pessimistic. There is still a ruckus in schools over the chapter on reproduction. While watching TV with family and suddenly a condom ad comes, then the remote start groping. This film is set in such a society.

There are three boys. All three hardened. They want to become rich soon. Take shortcuts. They rob a truck full of mobiles. On opening the box, it is found that there were condoms not mobiles in the truck. There are so many condoms that they can’t burn. Money is also needed from above. So all three start home delivery of condoms. Sell condoms by wearing a helmet on the face. That’s why the name of the company is also kept as the helmet. Further, their helmeted head wears a prisoner’s cap or crown, it will be known by watching the film.

This is not the first time that a serious topic has been presented in the packaging of a comedy. But there is a big problem with such films. Creating a balance between the comedy and the messaging part. Where the ‘helmet‘ seems to be failing. The film is seen trying to create maximum comedy in its first half. At the same time, in the second half, the message mode suddenly turns on. Where fun-loving characters start talking about consent. The discussion around condoms tells the need of our society. This shift from comedy to messaging mode knocks a lot.

Perhaps the easiest way for writers to end the story in such films is to use monologues. Where the essence of the story is spent in rhetoric. Same problem with ‘Bala’. The same thing happened in ‘Helmet‘. Lucky set out to sell condoms to earn quick money. At that point, it does not seem that he does this for the betterment of society. But at the end of the story, he gives an emotional speech. Where it tells what he has suffered as an orphan. That’s why he wanted to increase awareness about condoms. So that the condition of no other child should be like his. Seeing this, the motive of the character is not clear to you. What did the brothers want to do? Whether to earn money or do social service.

Nice to see that Aparshakti was brought out of the hero’s friend image. He can lead the story. Provided the story should be strong. Pranutan Behl played his girlfriend Rupali in the film. The word girlfriend was used because above this the existence of his character is not visible. But in all the scenes she was in, she did a good job. Abhishek Banerjee, who became Sultan, is probably getting typecast for such roles after ‘Stree’. Hero’s friend Small town type. Whatever the story, it is fun to see them on screen.

Now talk about Lucky and Sultan’s third friend. The name is minus who listens high. Ashish Verma played the role of Minus. Minus is a totally burly type of guy. The person who spoils the plan among three friends is only a minus.

Kamasutra Condoms is the official brand partner of the film. You will not be able to forget this information. Because Kamasutra has been integrated so much in the film, which has no limit. And that too not in a simple way. So much advertising that at many points the film looks less ad more. The length of ‘helmet‘ is about one hour and 45 minutes. That’s why everything goes cut-to-cut. There is fun in some places. The rest swings on several points. You can watch it if you want to otherwise you will not miss anything.