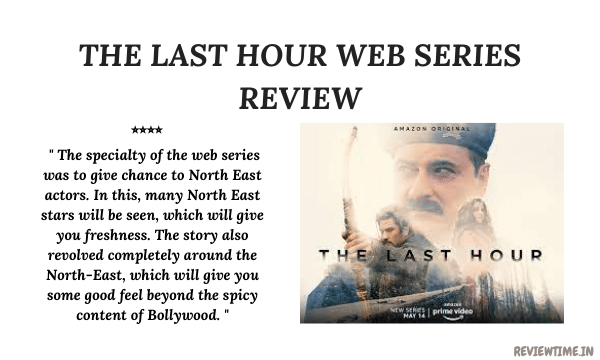 In the Last Hour web series, Sanjay Kapoor (Arup) plays the role of a police officer, posting in North East from Mumbai. Arup has a daughter named Pari (Shaylee Krishen). At the same time, his wife Naeema (Raima Sen) dies in an accident. In the North East, Arup meets Dev (Karma Takapa). It has been shown in the series that Dev can talk to the souls returning from the earth. With love, the story is also about its tradition among the occultists. Who will have which knowledge and how does he use it, the story is about this domination.

From the first episode to the last, some of the other death occurs in the series and time has been kept in focus throughout the story. Now how the tile of the web series connects to the last hour, it is better if you see it in the web series. Arup solves the cases with the help of Dev. Lipika (Shahana Goswami), who is a police inspector, assists in the case with Arup throughout the series. Twist and turns occur many times in the story. Now with the help of Dev, whether Arup is able to solve the case or not, and to know all the roles of Arup’s daughter Pari and wife Naeema in this whole story, you will have to watch the web series.

Sanjay Kapoor has been active in the industry for 26 years but has failed to achieve success like his brother Anil Kapoor. He is currently very active on OTT, he is seen playing side roles in films and web series. In this series, he has got the lead role, yet he is confined to the side role.

If the case of acting is seen in the web series, Karma Takapa has done a good job. He has played his role with great intensity. Shahana Goswami also kept her character well. Raima Sen has hardly got two dialogues in this series, it doesn’t matter much if someone else plays this role instead. Shylee appeared as a misfit in the role of Pari.

In the web series, a good attempt has been made to show the beauty of the North East in the best manner. The graphics are put to good use. From the movement of the clouds to the snow falling on the mountains, it is comforting. Many such dialogues in the web series are spoken about the people there under prejudice. The writer has also paid attention to this site.

Where the web series ends, the story will definitely move forward and the producer has not been able to finish it properly in the cycle of advancing the story.