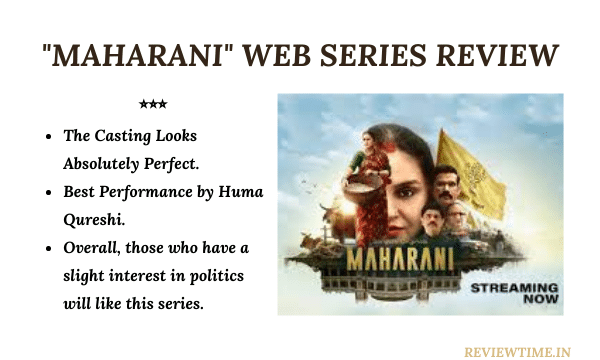 The OTT platform is meeting the shortage of closed theaters during the Corona era. In this sequence, Subhash Kapoor composed, Karan Sharma directed and Huma Qureshi, Soham Shah, and Amit Sial starrer web series ‘Maharani‘ has been released on an OTT platform (SonyLiv).

The story of the web series is woven over Rani Bharti, an illiterate ordinary woman from a village in Bihar and lives by rearing cows, buffaloes, and goats. Later, there is such a turning point in her life that this illiterate and ignorant politician runs the government by becoming the chief minister and exposes all the scams like animal husbandry.

Talking about casting, a dozen stars have played small roles in this series. Their casting looks absolutely perfect. The icing on the cake is that the story has been shown in the details of political politics, corruption, crime, operation of police, etc.

Talking about acting, along with the growing story, the growth that Huma slowly brings to her character is wonderful. If it is said to be her best performance, it will not be wrong. The performances of Pramod Pathak, Mohammad Hussain, and Vineet Kumar are also excellent.

Overall, those who have a slight interest in politics will like this series.