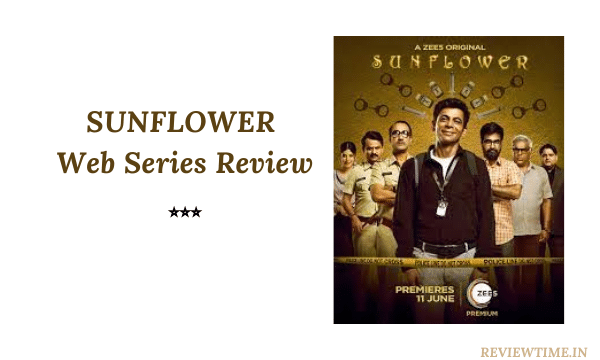 Vikas Bahl, the writer, and director of many films including the film “Queen”, has brought this time the crime thriller and dark humor mixed web series “Sunflower”.

Sunflower is a society consisting of eminent people of the society in the city of Mumbai. The interesting characters of this society include Hindi chemistry teacher Ahuja (Mukul Chadha), rich arrogant neighbor Raj Kapoor (Ashwin Kaushal), moral policing flag bearer Dilip Iyer (Ashish Vidyarthi), innocent but quirky Sonu (Sunil Grover), and others. Rich in pride, Raj Kapoor troubles his neighbors every day. One morning Raj Kapoor’s maid Kamini (Ms. Annapurna Soni) informs the people and the police that Kapoor has died. By the way, the viewer gets to realize how Kapoor was murdered. But the calm and controlled police inspector Devendra (Ranveer Shorey) and his charming junior colleague Tambe (Girish Kulkarni) arrive to solve the mystery of Kapoor’s death.

While the police are investigating the matter, it starts the search for a noble secretary for the Sunflower Society, who can maintain the so-called dignity and peace of the society. Dilip Iyer (Ashish Vidyarthi) comes up with rigid rules and regulations in the name of culture and tradition, serving as the ideal metaphor of moral policing. Dr. Ahuja is the embodiment of evils. He is a stereotypical, violent, double-faced, patriarchal person with a patriarchal mindset. He wants his wife to admire him when he is intimate with his wife in bed.

The story slowly drags on. Many characters keep coming. Sonu Singh is seen trying to infuse love on his office colleague Aanchal (Saloni Khanna). In the eighth episode, it is revealed that his first girlfriend Juhi has left him and took Ashish Kapoor’s hand. Professor Ahuja is angry, this thing keeps coming to the fore. He keeps failing in his attempt to hide his crime but keeps blaming his wife (Radha Bhatt) again and again.

In the seventh episode, Inspector Tambe sees Sonu Singh as the killer while Inspector Devendra sees Professor Ahuja. In the eighth episode, the police keep looking for Sonu Singh. But he is kidnapped and reaches Chandigarh.

The name “Sunflower” is meant as a metaphor. This murder mystery and black comedy web series should have been so sharp that the audience can keep watching, but here everything is flat. Despite the excellent cast, the web series could not be made right. The very weak link of this web series is its story and screenplay. The story progresses so slowly that the viewer becomes depressed. This is nothing but half-cooked khichdi. The characterization of many characters has also not been done properly. ‘

The story progresses at a very slow pace. The scene of Sonu Singh i.e. Sunil Grover closing his house and going to the office is quite boring and it has been repeated in many episodes. Sonu Singh caught on the streets of Mumbai with the cab driver seems to be a very childish act and it is a very long scene, which bores the audience.

Sunil Grover has been successful in bringing to life the character of Sonu Singh of strange, quirky, and witty innocence. Ranvir Shorey is also fine in the role of Inspector. In the role of Inspector Tambe, Girish Kulkarni is successful in entertaining the people in his own style. Simran Nerurkar impresses in the role of Gurleen. There is always innocence in her face and her voice. The acting of Ashish Vidyarthi, Mukul Chadha, Ashwin Kaushal, Dayana Irappa, Saloni Khanna, Sonal Jha is fine.