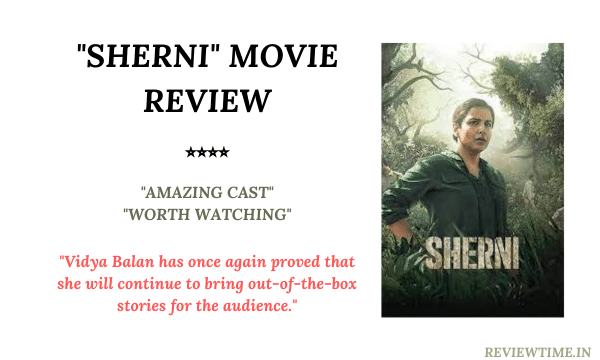 We all have probably learned from childhood that animals are our friends. They too have life and they also feel pain like us. Vidya Balan’s film “Sherni” is different and teaches us deeply.

This is the story of Vidya Vincent (Vidya Balan), who is the head of the forest department, who wants to safely catch the lioness roaming in the forest, killing humans and animals. But there are many obstacles in his way.

Vidya’s boss Bansal (Brajendra Kala) is running away from his responsibilities and brings in Pintu Bhaiya (Sharat Saxena), a private hunter, to kill the lioness. At the same time, local politicians are engaged in doing politics by making jungle and lioness issues for elections. In such a situation, there are many difficulties in front of Vidya. Now she will be able to catch the lioness or Pintu Bhaiya will come in the middle or else the ruckus of the leaders standing in the election will spoil her work, this is the thing to be seen in the film.

Director Amit Masurkar has earlier made the film Newton. In that film, he showed simplicity and genuineness and in this film, he has also brought the original forest department and things related to it. Aastha Tiku has written this story. The screenplay written by her takes a dig at how government departments and local politicians are trying to do good to the public according to their thinking. Their methods are different, but their intentions are not black.

The screenplay of the film is what makes it worth watching. In search of the lioness, Vidya Vincent is engaged in scavenging every bit, the government wants to save the lioness. Villagers want to use the forest to graze their animals. So the animals themselves want to live in such a place where their life is not in danger. This film shows how moral corruption affects one person to another and then on big decisions.

In this film, many good actors have worked with Vidya Balan along with Brijendra Kala, Vijay Raj, Neeraj Kabi, Sharat Saxena. All the supporting cast of the movie is also good. All these actors together make this film ‘real’. Everyone has played the characters well except for their glamorous style. There are many funny and deep-meaning scenes in the film, which you will remember. Vidya Balan has once again proved that she will continue to bring out-of-the-box stories for the audience.