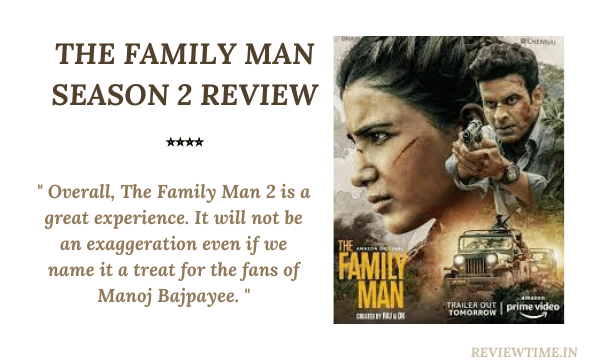 The Family Man Season 2 has been released on Amazon Prime Video on June 3. Everyone liked the kind of drama that the first season of the series presented to the people. This expectation of its audience has also been retained in The Family Man 2. There is action and humor, but this time there is a new story in the series, whose strings are related to the terrorist mission of the last season. Apart from all the main characters of the first season, actress Samantha Akkineni also appeared in this season. Let’s know-how was the caravan of The Family Man 2, what was new in this season, and what is now the end of the season.

The last time Shrikant Tiwari and his secret agency fought terrorists, this time he also faces a rebel faction of a Sri Lankan exiled government that considers himself a revolutionary. There are many such members in this group who are ready to give their lives to bring back their government. Among them is a female rebel, Raazi (Samantha Akkineni), who alone is enough to settle ten people. She has got training to drive up to the plane in addition to shooting a gun. The responsibility of completing the mission rests on her shoulders.

After this death, his brother, who is the leader of the rebel group, goes very angry and joins hands with terrorist Sameer (Darshan Kumar) to activate his mission. The interesting thing is that Sameer has taken the life of his rebel brother, which no one knows except him. The leader of the rebel group puts his men on a mission to avenge his brother’s death and activate his government.

The purpose of this mission is to turn the meeting of Prime Minister Basu and the Sri Lankan minister into a death scene. The technology they use for this is very dangerous and secret. This technique is known only to Raji who has got training to fly the plane. Dark complexion, calm but angry expression on her face, agreeing to the excesses of men, works in a small factory in Chennai. She is hiding her true identity, waiting for the day when the death of her rebel siblings can be avenged. After the announcement of the mission, Raji meets her remaining rebel comrades and starts completing the work.

On the other hand, Shrikant Tiwari has now started working in an IT firm. Trying to make his family image in front of his wife and children. But there is still a fragrance in his mind to know about the happenings in the agency. He takes details of every incident from JK, as well as helps them. He gets into an argument with Suchi on her birthday and angrily tells Suchi that it was better that Srikanth would have gone back to his old work. Shrikant got the wish without saying as much as he wanted. On the second day, he leaves the company and joins the agency back.

But this time it is not so easy for Shrikant Tiwari to get the successful meeting of Prime Minister Basu and Sri Lankan Minister. Srikanth’s old enemies are eyeing his family to disturb his mission. They kidnap Srikanth’s daughter. Now, on the one hand, Srikanth has the task of fulfilling his mission in Chennai to serve the country, while on the other hand save his kidnapped daughter in another city from the clutches of terrorists. The wires of both are connected to each other but to know who is of importance to Srikkanth, one will have to watch the series. On one side the duty of the father and on the other hand the duty of the country. Which of these two will Srikant save and whom will he sacrifice?

The Shrikant Tiwari we saw in the first season still hasn’t changed. Yes, the work definitely changed but the heart still beats for the country. Manoj Bajpayee in the character of Shrikant has lived up to the expectations of the audience hundred percent. The way of expressing your anger in a humorous manner on a lighter note still hasn’t changed.

Samantha Akkineni has completely justified the character of Raazi. How a woman who looks like a poor woman becomes fierce and merciless, has been shown by Raji very well. According to the demand of the series, Raji had to carry a flat expression on her face throughout the show, which was presented by Samantha so closely that one might at once doubt that it was the same bubbly-beautiful Samantha seen in the films. Manoj Bajpayee in the character of Shrikant Tiwari and Samantha in the role of Raji has been perfect.

The direction of director Raj Nidimoru and Krishna DK will have to be praised. The Family Man 1 not only won the hearts of the people but The Family Man 2 also impresses the audience with a new story. The funny thing is that the directors have given a hint of a new mission at the end of this mission of the series. That is, after The Family Man 2, its third season will also come. This time the story will be something else, a glimpse of which is shown at the end of the second series.

Talking about the lack, this time there was a lack of Musa (Neeraj Madhav) in the series. This time it was far less visible. Yes, Raji may have replaced Musa but that aggression was less visible in this season than before. Somewhere it was felt that some scenes have been forced into the show.

Overall, The Family Man 2 is a great experience. Around 9 episodes can be watched comfortably by taking out half a day. The second season of The Family Man will not bore you. It will not be an exaggeration even if we name it a treat for the fans of Manoj Bajpayee.