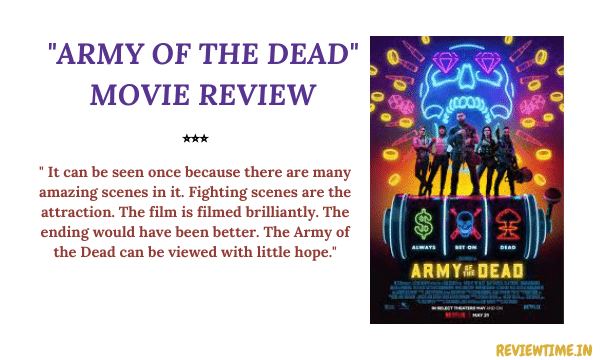 Army of the Dead Movie Story:

The story of the “Army of the Dead” movie is of an American city called Vegas, which is completely occupied by zombies. The city has been sealed from all sides and the government plans to completely destroy the city by dropping atomic bombs. Vegas has $ 200 million in the vault of a casino. Scott Ward is tasked with stealing it. He makes a team and goes there to rob them. He has thousands of zombies in his path which his team has to compete with.

The story of the Army of the Dead basically runs on three tracks. The fight with the zombies, the vaulting of the vault, and the emotional relationship between Scott Ward and his daughter.

The best of these three tracks is the fight track Zombie. Thousands of zombies are killed. Carcasses of blood and flesh fly around. There are many such scenes that people who dislike bloodshed can hardly see, but those who like the movie of zombies will like it.

As far as the vault opening and looting track are concerned, the adventure is missing. There is nothing new. Everything gets done easily, no hitch, no difficulty, so it seems a little uninteresting.

The love-hate relationship shown by Scott Ward and his daughter is not one that tears out. These days the trend is that even humans who look and act like superheroes are not far from the grief and pain. There is also tension in his family life. Perhaps this is why this track has been given space.

The ending of the film is disappointing. Why? That’s why you should watch the film itself. However, in the end, a thread is left so that if the next part is formed, it will help to weave the story with the help of this thread.

Army of the Dead Movie Cast:

Army of the Dead Movie Review:

Zack Snyder has taken a lot of responsibility for this film. He is a producer, a director, a writer, and also his cinematography. There is nothing new in the story. Many films have been made on this type of story. We have seen in many films about teaming for loot and each character has some special feature.

Despite the newness and shortcomings in the story, Director Zack Snyder’s film can be seen once because there are many amazing scenes in it. Fighting scenes are the attraction. The film was produced on a grand scale. The set of devastating cities is tremendous. The film is filmed brilliantly. The ending would have been better and had the vandalized sequel been thrilling, the film would have reached different heights.

Dave Bautista, who played the lead role in the film, is a wrestler, a bodybuilder. His issues are worth seeing. Only such a man was needed for this role, even if he was weak in acting. Dave has handled this responsibility properly. Dave’s daughter is played by Ella Purnell. Her face is expressive and she has done great acting. Raul Castillo, Ana de la Reguera, Theo Rossi also impresses. Yes, Indian actress Huma Qureshi has also appeared in this film. The role is small, but she has managed to make her presence felt. The Army of the Dead can be viewed with little hope.

Army of the Dead Movie Ratings: