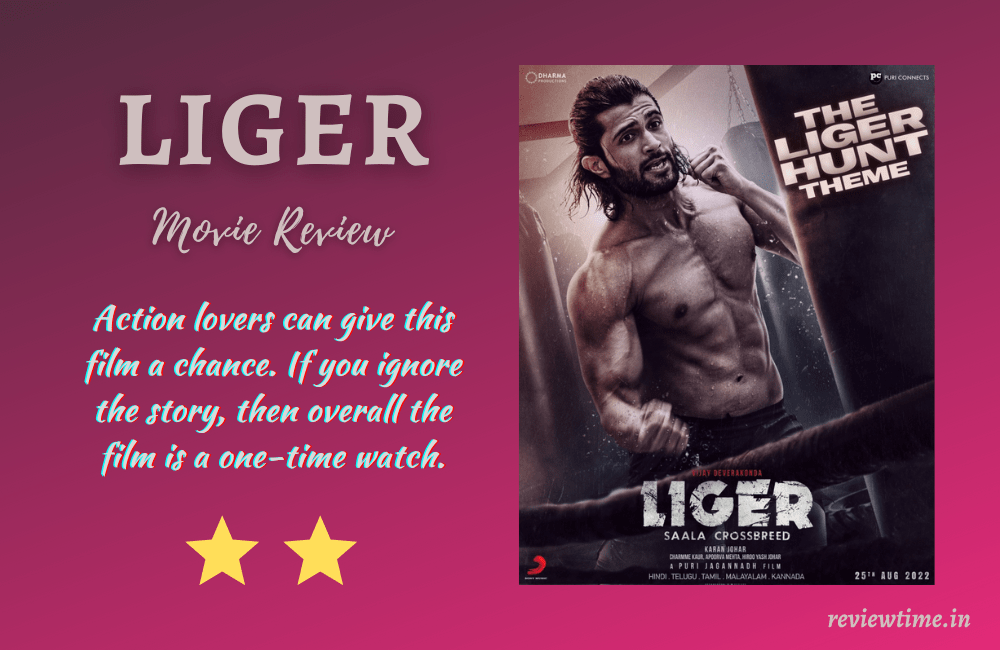 Vijay Deverakonda’s film ‘Liger‘ has been released through the middle of the Boycott etc. Puri Jagannath is the director of the film. That is, he wrote the story and screenplay, and also directed the film. Apart from Vijay, Ananya Pandey, Ramya Krishnan, and Ronit Roy are also part of the cast. What is ‘Liger‘ about, what kind of film is it, in today’s review we will talk about such points.

In the film, Vijay Deverakonda played the role of a boy named Liger. Liger means a mixed breed of Lion and Tiger. His mother bears this name. Because his father was a fighter, he was called Lion. Well, the financial condition of Liger is not good. He sells tea with his mother. The mother wants her son to become a champion. Carry on your father’s mixed martial arts legacy. The full story ahead is the story of Liger reaching the championship belt.

Liger wants to make its mark as an action film. But can’t do it. The amount of action Vijay does in the ring, even if it looks exciting to see. But the structure on which he stands is hollow from the inside. That is, the reach of the liger to that ring does not seem justified. First, lacks conflict or contradiction in his life. He does not have enough money to take MMA training. It gets solved before it becomes a problem for him. You use a word like exceptional only for fighters like Liger. He has no match in the ring. He never has to struggle in terms of skills. Just don’t control your erogenous. While watching the film, I felt that the makers will make his anger and this erogenous his challenge. Something that he tries to overcome. But the film doesn’t do that.

The film has also found the conflict in Tanya. Tanya is Liger’s girlfriend, and their love story is the most problematic side of the film. How Liger treats him, you will give his background argument for that. But Tanya’s character is also equal to her in this matter. There is often a complaint from Puri Jagannath’s films that they show female characters in a very stereotypical way. I felt that now it is 2022, something must have changed. But then saw Ananya’s character in the film. Disappointed, surprised. To such an extent that these feelings have ceased to be felt. The film tries to build the same stereotypical narrative around his character. The writing of the film has done its biggest loss.

Ramya Krishnan played the role of Liger’s mother in the film. Most of the time she is scolding Liger. How she raised her son in an unknown city on her own, that side is never seen. Imagine whatever worn-out stereotypes persist about the girl of the big house. That’s just the character of Ananya. She wants to be a social media influencer who just needs the attention of her male followers. There is no objection to such a character. The problem is when you keep his whole life and all the conversations around that side only. The film also stars Ronit Roy, who plays Liger’s coach.

Vijay’s character Liger has difficulty speaking. Because of this, his joke also flies. In return, the hands and feet of the liger move. Vijay might have been given this brief for his character that you just have to keep the attitude a lot. The film does not seem inclined to explore the emotional side of his character. She just wants to see her hero fighting. The moral issues that bothered me with ‘Liger‘, even if they are removed, would not have made a good film. The story does not seem to flow in a single flow. It gets confused in the affair of showing many things at once. In such a situation, however, cool the punches of the liger may seem, but they do not have any effect.