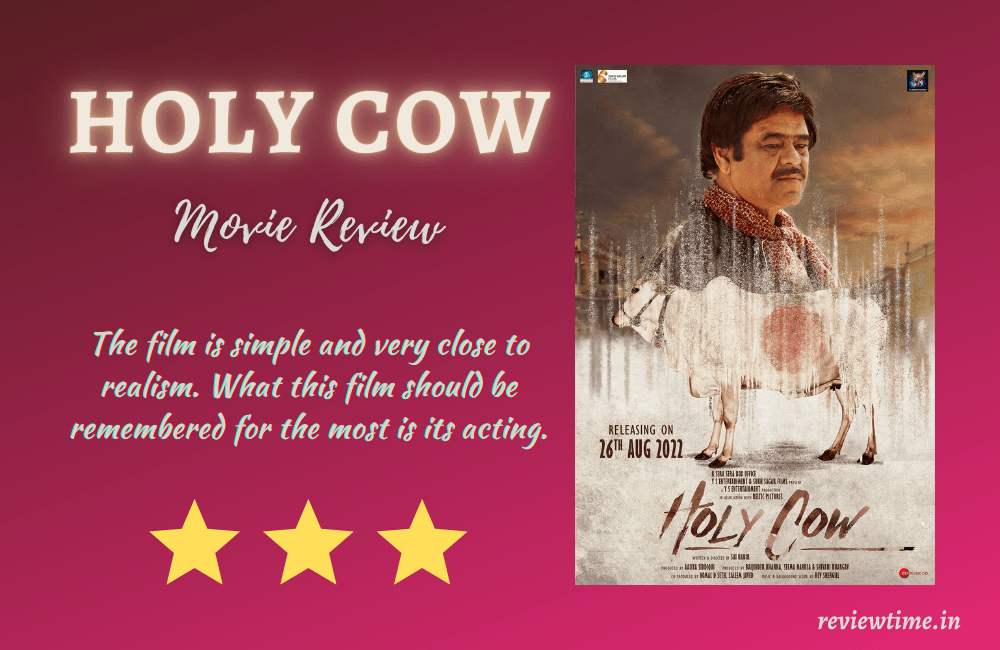 Short but big movies. That is, the budget is small but big in terms of craft. RK/RKAY was a movie of this caliber among recent theatrical releases. Now another movie has come on 26 August. ‘Holy Cow‘. This is an English term, which is used as a shocking/surprising word. But here it means something else. Simply The holy cow, which will amaze you. How, will tell you in the next few minutes.

One person is Salim. Poets are moody. Movies are. On talk, he keeps giving references to movies, sometimes of ‘Anand’, sometimes to Manmohan Desai’s film. Those people are not there in small towns and villages, those who wear colorful clothes and walk with spectacles, to say that they are absolutely funny. Salim Bhai is also like this. Fluffy in the mouth, but clear in the mind. Ram Babu or Rambu is his friend. He is more or less the same as Salim. Always ready to help friend. Now Salim’s cow is lost, someone has uprooted it with a peg. Since he is a Muslim. That’s why people think something else. That is, the cow is not lost… you can understand further.

To find his cow and save himself from dying, Salim makes various efforts. From police to politicians, he goes everywhere to ask for help. One such helpful local party leader is Shamsuddin. For that, Salim Jalil gives the example of Bede Saheb who when he was asked to kill the Devil’s pebbles, refused. His heart was filled. His Shamsuddin brother is also like this. But how they are, will be known by watching the film. The entire film is woven around the lost Rukhsar i.e. Salim’s cow.

This will make you laugh. But he will also be forced to think the same way. In a society where Muslims are doubted about the cow. Even a Salim of that religion can love a cow. Any Hindu can also indulge in the illegal trade of cow. There is a scene in the film where the cow is not eating the fodder. Salim finds out what she will eat! So even at midnight, he brings something worth three hundred rupees for one thousand for his cow. feeds him with great love. Where on the one hand Salim is afraid of Hindus.

On the other hand, his Hindu friend Rambu unites night and day with his help. Talks about chanting Mahamrityunjaya for him. The good thing about the film is that it doesn’t try to establish whether a Muslim is good or a Hindu is bad. Operates with a balanced approach. Some Muslims are good, and some are bad. Some Hindus are good, and some are bad. Believe it, it will depend on the nature of the person, will it not? It doesn’t matter what his religion is. What is that person like is important.

A Muslim is talking to Salim to come from Karachi after training. Salim is saying: Find another option brother, not terrorism. There is a lot of power in this one thing. The whole film is powerful. Its dialogues have been written to the point, they do not seem preachy. In common language, big things have been said from the mouths of the characters. In these, the satire has been woven with comedy. Its screenplay does justice to the idea of ​​the film. The flow does not break anywhere. Sai Kabir has done a tremendous job in writing as well as in direction. Small things are taken care of in the film. It has a direct meaning, the other is like going across the screen to understand.

The dialogues are also of the same level. Any event that is happening in the film. Needless to know. Except for a few things. which can be ignored. Every incident needs to be read Between the Lines. It is not possible to tell more, or else it will come under the category of a spoiler. The climax of the movie could have been better.

‘Holy Cow‘ is very close to realism. Not just in the context of the story, but also in the form of filming. Shot in real places. No attempt has been made to show anything beautiful. It is shown as it is. The transitions are not good in the first few shots. The film is simple, so even simple transitions look good.