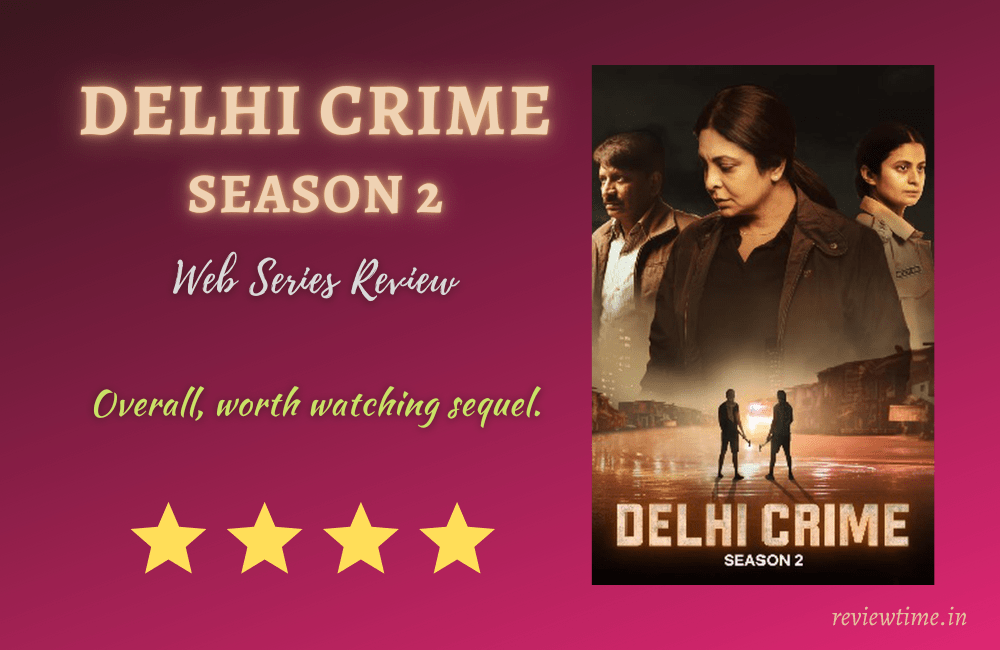 The one who saw the first season of Delhi Crime was eagerly waiting for the season 2. The first season was critically acclaimed and was also taken by the public. Many international awards also came into its account. Now finally the second season is streamed on Netflix on 26 August.

The first season of the series was based on the Nirbhaya case. The second season of the series is based on the Kachha-Baniyan gang. It was a tribal gang, which used to be very active in the nineties. Its traces were last found in 2003. This gang used to commit robbery wearing briefs and vests. But the matter is how it became active again in the present time. Younger generation of Kachha-Vaniyaan gang. Murders are being murdered. DGP Vartika Chaturvedi has suffered a nosebleed. The Home Ministry needs an answer to everything from the Commissioner and Commissioner Vijay from Vartika. The public and the media are lagging behind. Vartika with her team, which includes ACP Niti, Inspector Bhupinder, Jayaraj, Sudhir, Subhash, and many others, is involved to solve this case. The story is just that.

It is easy for a frozen franchise to establish a connection with the audience. Same familiar character. His familiar style. Everything seems to be about your home. Something similar happens with Delhi crime. However, it is not that one who has not seen the first season will miss something in the second. This is a totally separate matter. Just characters are beans. The special thing about this crime drama is that neither the police nor the audience knows about the criminal in the first half. In the third episode, the makers do a trick. Tell the public about the criminal. That is, the police do not know, we know. This is a tried and tested technique of storytelling. This makes the audience consider themselves superior. Finds herself ahead of the police. In such a situation, they enjoy watching a film or series more.

The story is nothing special. is simple. But his treatment is good. Director Tanuj Chopra lets the tension build. Grab the rubber webbing and pull it hard. Where it breaks, cinema is born. Since this is a police drama, chase and illegal hunting sequences will be seen in full swing. His filming and camera work is such that it is interesting to see. The director has kept the approach real, so it all seems like his own. You will find many such moments in the series, where music and drama wreak havoc.

The screenplay seems to be half-baked. The issue of tribal gangs and DNTs has been left in the middle. In between, a lawyer sahib also comes from somewhere. Through them, a failed attempt has been made to take this track forward. The matter had to be explored a little more. The personal life of the three main characters Bhupendra, Neeta, and Vartika is a bit shaky in the first two episodes. After that, it completely disappears. A little hint in the last, but then it disappeared. Somewhere the screenplay stretches. Doesn’t get boring though.

The series tries to show the human face of the police. Breaks their stereotypical image. But there was no difference. She shows both sides of the police. The percentage on the bright side is high. The media also touches on the trial angle. But doesn’t explore. Maintains focus on police which is a good thing in many ways. One thing that I really liked about the series is that it doesn’t use stereotypical shots to show Delhi. Talking about the South District, she stays there. It does not show India Gate, Parliament, or many other famous places.

All the actors are happy. So the acting is almost good for everyone. Shefali Shah catches the character’s body language but makes her act more beautiful with her big eyes. Rajesh Tailang, who became Inspector Bhupendra, is not even seen acting. Rasika Duggal has also done a great job in the role of ACP. Adil Hussain has been able to make a mark even with less screen time. Gopal Dutt, Siddharth Bhardwaj, and Anurag Arora have also done their part well. The surprising element is Tillotama Shome. He has portrayed the mood of his complex character well. All the rest of the actors have done what they wanted.