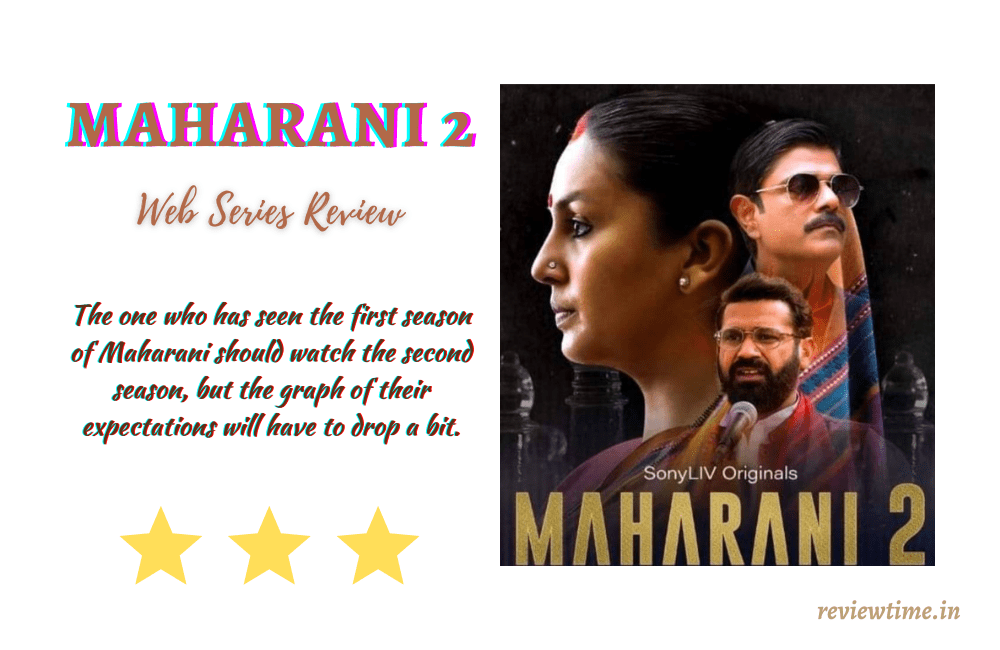 Whenever you think that you have understood Bihar, then Bihar gives you a jolt. Even not, this is the mood of the politics of Bihar, the mood which has created the game of coming to power and leaving power many times. This chapter of Bihar has come among us through Maharani 2. The Queen, who showed scam politics in the first season, has come this time to get acquainted with the politics of Goondaraj.

A little flashback before telling the story of the second season. Bhima Bharti (Soham Shah) was the Chief Minister of Bihar. Comes from a backward caste, so a person with a different mass base and always at the center of politics. As political ambitions increase, so does the number of enemies. At the same time, the enemies attack Bhima and the man have to leave the throne of Bihar. Now he leaves the throne but keeps the key to power with himself, the CM makes his own ‘uneducated’ wife Rani Bharti (Huma Qureshi). Rani hesitates in the beginning, hesitates to speak, but on seeing Bihar politics dissolves like sugar in tea. Then the chapter about unveiling her own husband’s black deeds, and sending him to jail begins.

Now the second season starts from here. Bhima Bharti is imprisoned in jail, and Rani Bharti is handling the CM chair. But goonda raj is increasing, anarchy has reached its peak. A famous model gets raped, and the local MLA gets her murdered. Staying in the center of this incident, this story of the queen moves forward. This is a story of only one crime, but many other incidents happen around it. Hurt on tainted politics, nexus between police and politicians, and a different color of religion.

Apart from this, there are other centers of the story. Naveen Babu (Amit Sial) has been dreaming of becoming the Chief Minister of Bihar for 17 years, but every time his opponents defeat him. This time it is the time of elections again, Rani Bharti has made a bet to give reservations to the backward society by implementing the Verma Commission. The atmosphere is building in favor of Rani, but then the issue of a jailed ‘Hindu Baba’ arises and Naveen changes the equations on the ground. This is the second chapter of this story which can be called – Mandal vs. Kamandal.

There is also the third chapter of this season. Relationships building and deteriorating for politics, this segment revolves more around Bhima Bharti. The ups and downs in his life affect his relationships and there are big dramatic turns in Bihar politics too. Now that the election is at the center of the story, who wins or loses, who is dominant in Rani vs Bhima, after 17 years, is the new CM or Rani’s reservation bet successfully? After 10 episodes of Maharani 2, all the questions will be answered.

We told you the flashback first this time, before telling the story of the second season, get the old aspects refreshed. The reason is that in the second season the makers did not bother to do so. There is a human mind, there is no computer to remember everything shown in the first season. This is a mistake of the makers because, in a series like Maharani, the characters are many, they have their own story and they also affect it differently. In such a situation, while watching the second season, some characters became familiar but had to think about what their role was in the first season.

Well, if we go ahead with all this, then it is a good thing. Like the previous season, this time the story has been weaved very brilliantly. The issues on which this series ran, it has been successful in showing. There was talk of goonda raj, there was a debate on tainted politics, and religious politics also appeared. The plus point is that every aspect got a chance to shine in the series, there was no rush. It also seems funny that the series draws inspiration from many real incidents, we understand it too, but it does not make any such claim anywhere. But those who keep a hold on politics will easily understand all those aspects.

Talking about acting, Huma Qureshi is amazing. In the first season, the journey of an illiterate woman from the village to the CM chair, in the second season the same character is given a new color. This time with the character of Huma, there is an intoxication of power, a tendency to keep relationships at bay, and the urge to defeat the opponents. Huma has not allowed any more expressions on her face, she has increased the graph of her acting by acting less.

Soham Shah, who became Bhima Bharti, is also in full form. This time the mustache has been replaced by a beard, it was effective in giving the character a slightly more intense look. The rest of the work was going to create a ruckus in his first season as well and this time too. Amit Sial is a typical leader in Naveen Babu’s role. Speech style, a different sparkle in the eyes, everything is what you see or expect to see in a leader.

In the second season, a new character has also been added, and a little bit of Prashant Kishore type was also felt, not telling much about him here, but you will understand yourself after watching the series. Among the rest of the co-stars, the work of Pramod Pathak, Atul Tiwari, and others are also good.

Another big change has happened in Maharani 2. This time Ravindra Gautam is sitting on the chair of the director, not Karan Verma. The creator is still Subhash Kapoor, so the original form has not tampered with much.

Now the one who has seen the first season of Maharani should watch the second season, but the graph of their expectations will have to drop a bit. The third season is also coming soon!