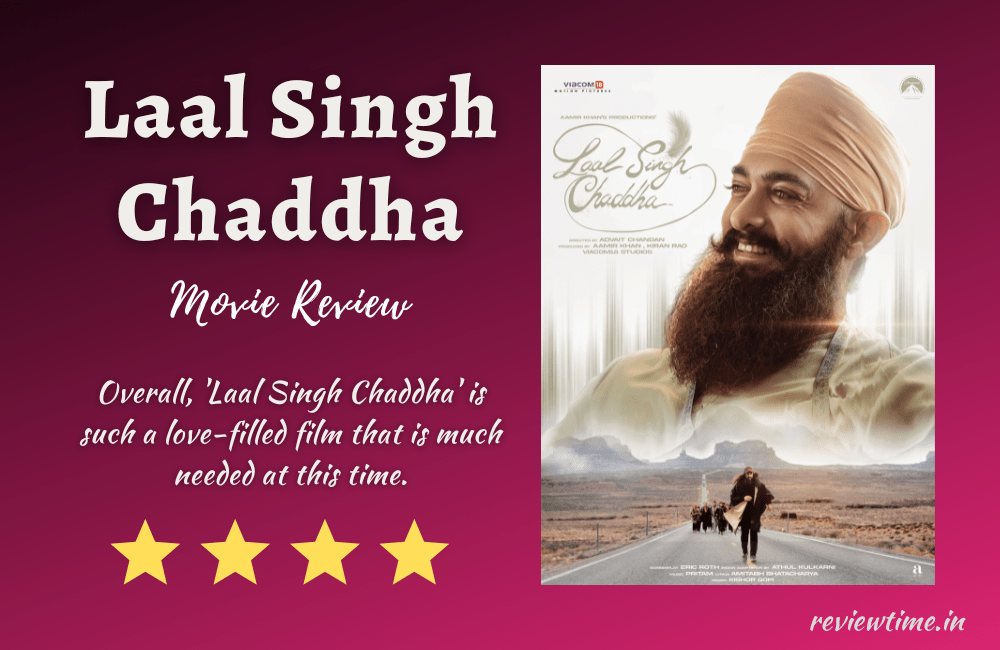 Before ‘Laal Singh Chaddha’ begins, you get a very long disclaimer in Atul Kulkarni’s perfect Hindi pronunciation. Can’t remember such a long disclaimer in any other Hindi film. But after watching the whole movie it seems as if this disclaimer was a satire on the confused thinking of us as a society. Because the film and Aamir’s character are really very simple and simple.

The film begins with a train journey. Here the journey begins, there is the story of Laal. Laal Singh Chaddha (Aamir Khan) is born with a condition due to which his understanding is slightly different from the rest. Laal is often considered ‘weak’ by most people, as is often done while being a little different from the ‘normal’, constructed within the limited limits of understanding.

But her mother (Mona Singh) trains her since childhood that she is no less than anyone. Laal also has problems walking in his childhood. But one day he runs away. And it runs as if it is running faster than the wind. Laal’s childhood friend is Roopa.

Apart from his mother, only Roopa has given love to Laal. As the story of Laal progresses, he becomes a witness to many important events in the country. However, in his own understanding, the impact of these events is not as you would realize. Rather, when Laal reacts to these incidents, you wonder and ask yourself, has the world really benefited from what we call understanding?

But the story is not only of Laal but also of Roopa (Kareena Kapoor). Seeing the weight that Roopa, who lives in Laal’s heart, has on her own mind, you will feel bad for her and will also sympathize. But this character is such that if you ever meet Roopa in real life, you might judge her badly. Or maybe you have already done so!

One of the highlights of the film is that a character who is considered negative or gray in a superficial sense is shown here with very basic humanity and sympathies. Which is probably becoming less and less in real life nowadays. One such character has been played by Manav Vij, which you will enjoy.

In Laal’s story, he also meets another friend, Balraju Bodi aka Bala. Bala is crazy about undergarments to the extent of the craze. There is a reason behind why this is so, which will make you laugh after seeing it on the screen.

The biggest feature of ‘Laal Singh Chaddha‘ is its emotions. This film is full of so many beautiful and lovely moments at many places that seeing them, your heart will be blown away. A person who is generally considered to be less understanding, of how accurate and simple his understanding of emotions is, will continue to amaze you. And these emotions are not only visible on the screen, you will also feel them fluttering inside you. Be it the scenes of Laal and his mother or Laal and Roopa, they will hit you deep inside.

Within the first half hour of the start, there are at least two such moments in which there is going to be a lot of applause in the theatre. One of them is the cameo of Shahrukh Khan, which is guaranteed to make a lot of noise and whistles. Kareena has been a part of many love stories onscreen. But her love story and chemistry with Aamir in ‘Laal Singh Chaddha‘ will be remembered by the people for a very long time.

The way the film depicts some big political events through Laal’s character is very sensitive. You will easily see on social media how much these incidents have affected people’s thinking and their lives. But the hero of the film does not walk with any view and despite being present in the midst of these incidents, it remains untouched.

‘Laal Singh Chaddha‘ once again shows us that Aamir whose examples of perfection are given. Molding the body according to the role, and changing the look, all this is physical parts of acting and Aamir has been an expert in this for a long time. But this time in emotional scenes, Aamir shows that he is getting better at his craft. At the end of the film, a scene with Aamir can even make you cry, keep the handkerchief ready.

As captivating as Kareena’s screen presence is, her work is equally lively. Roopa’s role wanted a different seriousness and melancholy, which is well reflected in Kareena’s work. Mona Singh has always been very strong in her small work but she finally got good screen time in ‘Laal Singh Chaddha‘.

Mona is the face of a mother of a differently abled child who would have the perseverance to stand up for her in front of society. Both the casting of Naga Chaitanya in the role of Bala and his work are excellent. His screen presence is also strong. It will be a spoiler to tell about the role of Manav Vij, but it will be counted among his best works. His eyes and appearance suit this role best.

Advait Chandan had shown in his debut film ‘Secret Superstar’ how tight his hold on emotions is. The emotions of ‘Laal Singh Chaddha‘ hit exactly where they should have reached. In Advaita’s work, there is no rush to move from one event of Laal’s life to another.

Satyajit Pandey’s cinematography is a strong part of the film. While on one hand, the beauty of Punjab, Ladakh, Delhi, and many other places is equally visible, there is an easy space in the frames like Laal’s character in the house-room scenes too. Amidst an emotional scene in the Kargil war sequence, the angle with which the camera rests on Aamir’s face attracts attention.

Without Tanuj Tiku’s music score, ‘Laal Singh Chaddha‘ cannot even be talked about. There is a sweetness to the score and it is nowhere in the mood of the scene but in perfect sync with it. The songs composed by Pritam have already become very viral, but while watching the film, the feel of the song ‘Kahaani’ is very different. Its Sonu Nigam version comes at the end of the film and that too is as lovely as the Mohan Kannan sung version.

Pritam’s tunes on Aamir-Kareena’s love story, lyrics by Amitabh Bhattacharya, and voices of Sonu Nigam and Arijit Singh create magic that keeps you completely lost while watching the film.

The work done on digitally reducing the age of actors in the film seems to be lacking in some places. VFX scenes should have been a little cleaner. For example, when he runs in the scene of Aamir’s college in Delhi, the VFX seems a bit more visible. After the interval, the film seems a bit stretched in the second half.