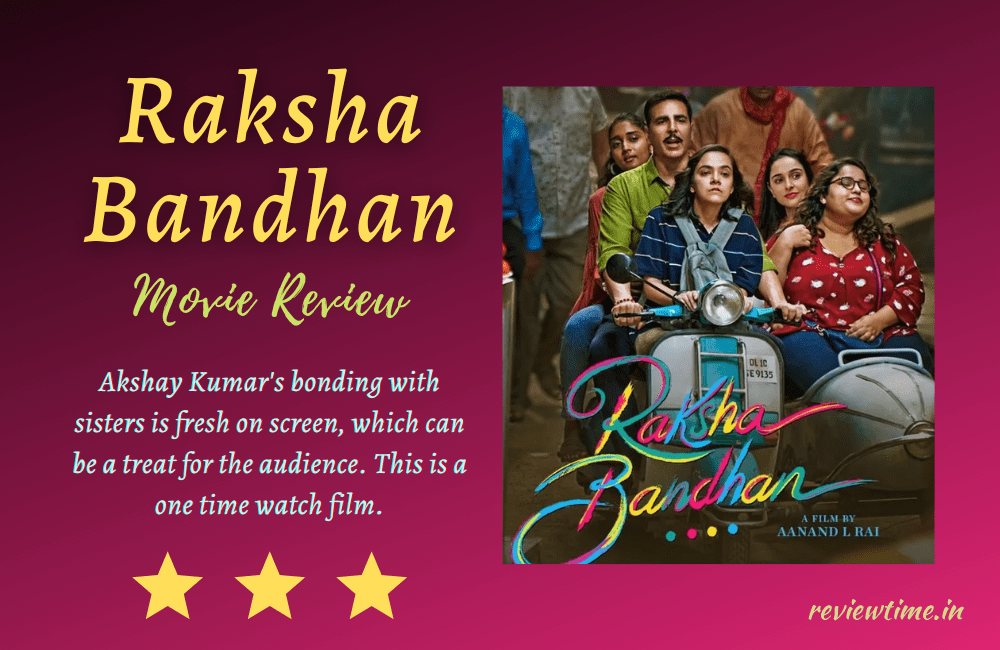 The story of brothers and sisters has come after a long time in Hindi cinema. The Raksha Bandhan Movie basically raises the problem of dowry, which is a big problem in our society even today. Later it also gives the message of making girls self-reliant.

Lala Kedarnath’s (Akshay Kumar) ancestral golgappas shop in Delhi’s Chandni Chowk is crowded with most pregnant women customers. There is a belief that they will have a son by eating his golgappas. Lala had promised his dying mother that he will marry only after the marriage of his four sisters. The four sisters are quite different from each other in their mood, appearance, and size. All of them have no complaints about it.

Sapna (Bhumi Pednekar) is in love with Lala since childhood and is looking forward to marrying her. Her father Harishankar (Neeraj Sood) is upset that Sapna is not getting married because of Lala’s words. Lala is worried about collecting dowry. He marries his sister Gayatri (Sadiya Khatib) by mortgaging his shop. Sells his kidney for the marriage of the other three sisters. Then all of a sudden, events take such a turn that Lala resolves to make her sisters self-reliant by educating them.

The story of the Raksha Bandhan movie is written by Himanshu Sharma and Kanika Dhillon. Aanand L Rai has earlier made films like Tanu Weds Manu, and Atrangi Re based on the story of Himanshu. He has a good intention behind making this film. This time he has raised many issues including dowry, women empowerment, and molestation. The author has not been able to do complete justice to anyone because of putting many issues. For example, the author could not fully explore Gayatri’s suicide. The story is currently set in Delhi but has the feel of a small town.

The film before the interval escalates from the tussle between siblings, love, and Lala’s marriage. The story takes a turn after the intermission and questions are raised about social norms. However, this film does not talk very deeply about the problems of dowry. It required a lot of work at the writing level. The screenplay of the film is very weak in many places. In the end, the film seems to have been handled very fast. The dialogues of the film are impressive in between.

Akshay Kumar has lived the character of Lala with great vigor. He gets emotional in the emotional scene. In the role of Sapna, Bhumi Pednekar looks effortless and natural. However, despite living in the same locality, and having childhood love, Sapna is not friends with any of the four sisters. The reason for this is also not clear, while this aspect could have shown the sisters’ thinking towards society and their problems closely.

The chemistry of Sadia Khatib, Deepika Khanna, Smriti Shrikant, and Sahajmeen Kaur in the role of sisters is solid. They haven’t even got a lot of opportunities to showcase his talent. Seema Pahwa makes a strong presence in the role of the matchmaker of the wedding. Neeraj Sood notices the role of the father. The escape scene from the mandap is reminiscent of the movie Dil Hai Ke Manta Nahi. Irshad Kamil’s song in the film has been composed by Himesh Reshammiya. Except for the song Mera Kaam Done Kar Do, the rest of the songs are not remembered.