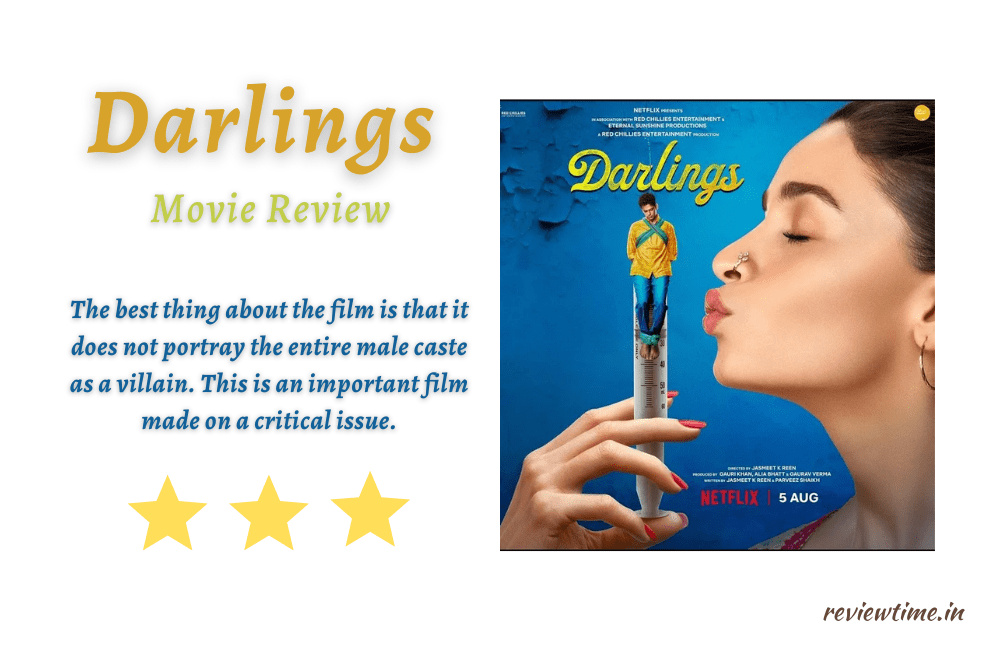 ‘Darlings‘ is the story of Badru. Her husband Hamza, drinks and beats her. beats with horrific cruelty. beats at night. The morning celebrates and the wife melts after being killed. Hugs her husband, loves. It’s night. Husband beats again. The wife beats and serves the husband. Badru’s mother explains to him. But she gives all the opportunities one after the other to Hamza. And before sleeping, he eats no food and kills. But suddenly something happens that turns the tide. Badru along with Zulfi and her mother, who live together in the chawl, make some plans. Does that plan carry out or not, or does the plan change? His plan takes him to the police station. The beating here is not one-sided, it is two-sided. That’s the story.

Overall the story is simple, but the treatment is simple. What makes a movie a good film is its treatment more than the story. ‘Darlings‘ will also be remembered for its treatment. How comedy flourishes from tragedy, the film is its hallmark. The film raises the serious issue of domestic violence in a sincere manner. But in all this, the film does not bore you. Something keeps happening. The action goes on and the action is not that it just exists. This moves the story forward. Opens the layers of characters. Gives them full opportunity to be flirty. Yes, the butcher’s character seems half-baked in the beginning. He didn’t know the need. But by the end of the film, it becomes an important part of the story.

The same seems to be the case with the character of Zulfi. I don’t understand where his family is. What is his job? But despite all this, Zulfi is an important part of the story. The screenplay does not spread anywhere except in one place. She walks in a mold. Follows the three-act structure. First creates the atmosphere. Then creates conflict and finally resolves it.

Jasmeet K. Rein’s direction is good. He has made a linear story better with good treatment. She creates small moments. Fills you with the cruelty of the characters. evoke sympathy for them. The film starts a rebellion against patriarchy. But she doesn’t cry anywhere. That is the specialty of the film. In a jiffy, such things are easily said, which remain with you. The dialogues of Vijay Maurya, Parvez Sheikh, and Jasmeet are acid, leaving you stunned. It pierces the heart like an arrow.

Some of the frames are beautiful and experimental. The mirror is used well. Till now we see the face of the person sitting in the back seat of the scooter or bike. But here such a camera angle has been used, in which two men are seen in a small mirror without blocking each other. There are such frames, where Alia is adorned in front of the mirror and her four reflections are visible in the mirror. Wide angle lens is good to use. A frame, in which everything from the building to the market is visible. Its cemetery is very good.

Alia Bhatt has once again proved in the role of Badru that she is not only a star but also a good actress. Her crying, her shouting, and her innocence all seem real. Shefali Shah has not acted in the role of Badru’s mother but has lived that role. She brings out the frustration of the character, her frustration in a good way. Roshan Mathew has not tried much in the role of Zulfi, which is a good thing. Vijay Varma is the life of this film. He has imbibed Hamza’s cruelty in himself. Once in a while, we hate him. This is his success as an artist. Rajesh Sharma impresses even in the small role of a butcher.

The best thing about the film is that it does not portray the entire male caste as a villain to make women suffer. Only those who are villains make them villains. Granted, it raises its voice against patriarchy but does not treat men like devils. There is not much of anything in the film. It would be dishonest to call it a good or a bad film. This is an important film made on a critical issue. Watch it being streamed on Netflix.