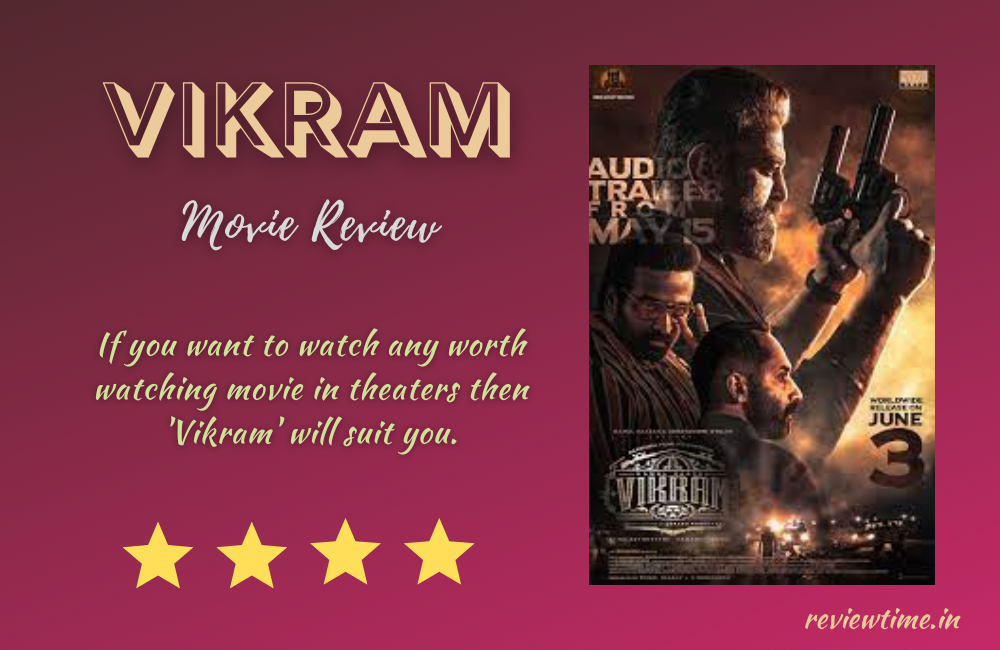 One of the most awaited films of the year ‘Vikram‘ has been released in theatres. Even when I am writing this line, the background score of this film is playing in my mind. Which has been created by Anirudh Ravichandra.

Well, ‘Vikram‘ is a part of Lokesh Kanagaraj Universe. The story of this film begins a few months after the end of ‘Kaithi’. Inspector Bijoy has caught illegal consignment of drugs. Two containers are missing from it. Before the police reach the container, a drug lord named Santhanam wants to find him. In the midst of all this, the killing of policemen started in Chennai. A masked gang takes responsibility for these murders. Among the officers killed is a Narcotics Bureau officer named Prapanchan. Her father is Karnan, who is drunk. But after killing his son, he sets out to take revenge.

To find out who are the people behind this gang, the Chennai Police Chief calls a black squad officer named Amar and his team. In this investigation, Amar’s needle repeatedly gets stuck on a man named Vikram. When Amar scrolls through the pages of history, he learns that Vikram and Karnan are one and the same person. But the Vikram who is dead, how did he come back? Even if he came back, why would he kill his son? What is Santhanam’s connection to all this? You will find answers to these questions in ‘Vikram‘.

In India, the emphasis is now on making good cinematic experiences, not on making good films. Filmmakers of South have done Ph.D. in this game. No matter how basic his story may be, the way it is being made, it is fun to see it. Vikram is one such film. Actors like Kamal Haasan, Vijay Sethupathi, and Fahad Fazil are working in ‘Vikram‘.

Despite this, it is being called Lokesh Kanagaraj’s film. Lokesh Kanagaraj has proved that he has become proficient in making potboiler cinema with his films. The audience will love how the superstars are presented, it has become their USP.

‘Vikram‘ has all the qualities that could have made him a great entertainment film. The first half of the film has a great build-up. All the characters have been launched. The story has been set. Then comes the pre-interval scene of the film, which makes you very hopeful for the future. When the story starts unfolding in the second half, then you are disappointed on the story front. Because here you are faced with all the worn-out formulas. Lokesh wants to give emotional depth to this film. But those situations do not create any emotion in you. Despite the predictable plot, your interest in ‘Vikram’ remains.

There are three special things about this film- First, the performance of the leading stars. The second thing is the action sequences of the film and the third is the background score of the film. Seeing Kamal Haasan, it seems that now he wants to play good characters in his career leaving the insistence of the leading man. Very few are seen in the first half of ‘Vikram‘. But the second half is completely on.

Vijay Sethupathi plays the role of a drug lord named Santhanam. In the pre-interval scene we mentioned above, you can see Vijay doing an action. There, in 30 seconds, Vijay does something that no so-called action superstar will ever be able to do. Fahad Fazil has played the role of a black squad officer named Amar. Fahad has got more screentime than both Kamal and Vijay in ‘Vikram‘. He continues to appear in the film. Many times I have read and heard that the performance of such an actor is absolutely effortless. For the first time in my life, I saw what effortless performance is. The only thing that remains is that in any scene of the film, we do not get a chance to see the three superstars talking together.

Apart from these, Chemban Vinod, Kalidas Jayaram, and Gayatri Shankar are also seen in ‘Vikram’. Superstar Suriya appears in a small guest role in the film. But that is a very strange cameo. Because he seems more about the next film than this film.

‘Vikram‘ is a film made keeping in mind the cinematic experience, in which there is still room for improvement. However, there is no such thing in the world that does not have scope for further improvement. If you want to watch any worth watching movie in theaters after KGF 2, then ‘Vikram‘ will suit you. Seeing three veteran actors of this generation performing in a film is a very exciting idea in itself.