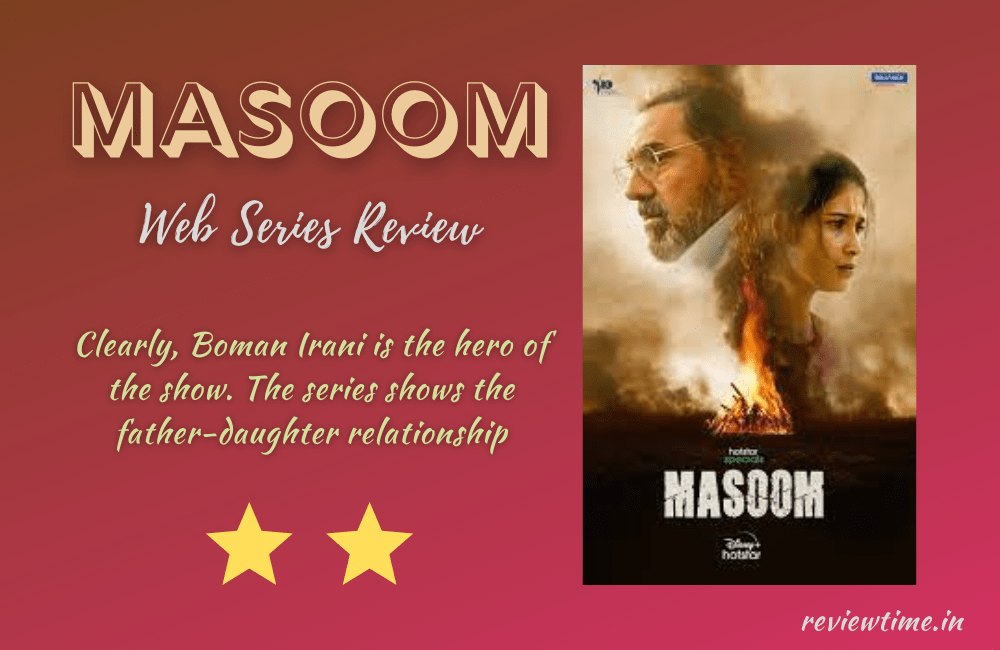 A series has come on Disney Plus Hotstar ‘Masoom‘. How is it? what is the story? whether it is worth watching or not? we will talk about all these.

So this is the story of a complex family. The story of Dr. Balraj, a resident of Punjab whose wife has died. And his youngest daughter thinks that the father has killed the mother. Episode by episode many layers unfold.

The series tries to touch on many aspects. Psychology, crime, thriller, family drama, father-daughter relationship, and to a large extent politics. But in the pursuit of showing everything, it is not able to put anything on the screen properly. Makers get trapped in their own created world.

Neither they are able to arouse curiosity on the screen, nor are they able to bind to the screen. The screen is black for the first 10 to 15 seconds of the start. After which only voice-over runs. This effort could have been successful. But then when the powerful dialogue could be heard behind that black screen. But it didn’t happen. This series wants to show the story of a complex family. In which nothing is black and white.

‘Masoom‘ is based on the Irish drama series ‘Blood’. When a series or show is adapted, many problems arise. Majorly whether the makers are able to mold her in their context or not. Here this problem remains completely. This show forcibly tries to impose psychology and suspense on you. Things become obvious. There are many scenes whose existence or non-existence was equal. The series deviates from its plot.

When its trailer came, my curiosity increased. If it is Boman Irani’s digital debut, it will be funny. This excitement remained in the first episode as well. But as I progressed my mind got tired. Same cliched storyline. There is no effort in direction or acting. Nothing is fresh. The screenplay is so loose that it is already known what is going to happen next. It seems that writer Satyam Tripathi had not been able to get the blueprint made in his mind right on the page. The direction of Mihir Desai has also not been able to save this show.

It is clear that the hero of this show is Boman Irani. You want to see more of them on the screen. But, it doesn’t happen. He proves to be the hero of the show even in very few frames. The expressions of his younger daughter, Samara Tijori, are the same throughout the show.

The characters of the series want to develop properly but are not able to. Talking about the background score, that too is nothing special. Some Punjabi songs have been kept to show the setup of Punjab, but they cannot leave an impact. There is no scene or any dialogue in the series that should be remembered.

Overall, we are saying with great innocence that ‘Masoom‘ did not come down from our throats. While watching these six episodes of only three-and-a-half hours, time does not pass. So just take a guess from this. The rest is your time.