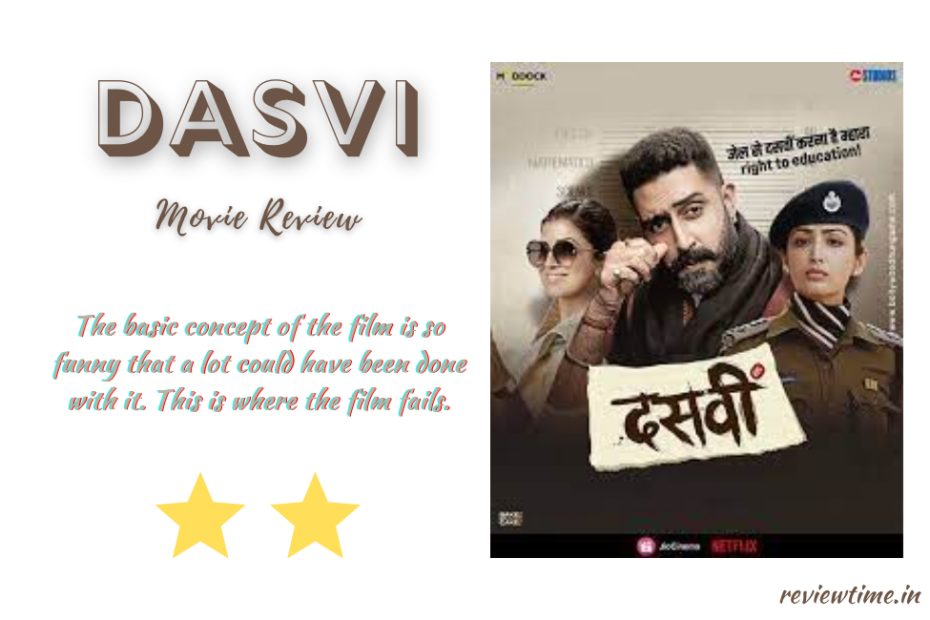 Abhishek Bachchan’s new film ‘Dasvi‘ has been released on Netflix.

The story of the film takes place in a fictional state named Harit Pradesh. But Haryanvi is spoken in that fictional state. Well, the Chief Minister of the state, Ganga Ram Chaudhary, is accused of being involved in the scam. The matter reaches the court and the CM is jailed. The former Chief Minister is completing his jail term with the treatment of a five-star hotel. The power does not go out of the family, so he makes his wife Vimala Devi the chief minister from jail itself. Vimla had entered politics under compulsion, but now she is enjoying it.

On the other hand, a new superintendent arrives in the jail, name is Jyoti Despal. Jyoti is angry with Ram because she was transferred on his orders. When she learns that Ganga Ram is only 8th pass, she insults him. He makes a bet with Jyoti that he will give the 10th exam from jail. If he does not pass, he will never sit on the chief minister’s chair. Whether they are able to pass tenth or not, this is the story of the film. Because of this result, his entire career rests.

This film, swinging between entertain and educate, remains confused. Keeping the entertainment quotient intact, he has to tell people about the work. But it should not even seem that the film is throwing away knowledge. So she does different things. Tries to touch on many topics. Politics, Morality, Caste System, Corrupt System, and all social issues. In the affair of wandering from one topic to another, I am not able to talk about any issue in a convincing manner. Although the film makes every effort to connect the public with it.

‘Dasvi‘ is an important film for Abhishek Bachchan. In the film, he has played the role of Chief Minister Ganga Ram Chaudhary. This is the role of his career, in which he had the scope to perform. He makes full use of this opportunity. Barring his Haryanvi accent, this is his best performance. Nimrat Kaur played the role of his wife Vimala Devi Choudhary. Earlier, Vimla used to do the work of providing fodder and water to the cows and buffaloes in the house. But after sitting on the chief minister’s chair, he gets addicted to fame and politics. Nimrat has played this character with full confidence and fun. Yami Gautam has played the role of the Jail’s new Superintendent Jyoti Despal. Yami is trying to do something different or new in every film. Her performance in this film is also senior. But she becomes a victim of bad writing.

Apart from these, Arun Kushwaha has played the role of Gangaram’s friend Ghanti, who teaches him Maths. And Danish Hussain is seen playing the role of a librarian named Rae Bareli in the film. His name is Rae Bareli because most of the prisoners who come to the jail cannot speak the word library.

‘Dasvi‘ is a bad film made on a good subject. Because the basic concept of the film is so funny that a lot could have been done with it. This is where the film fails.