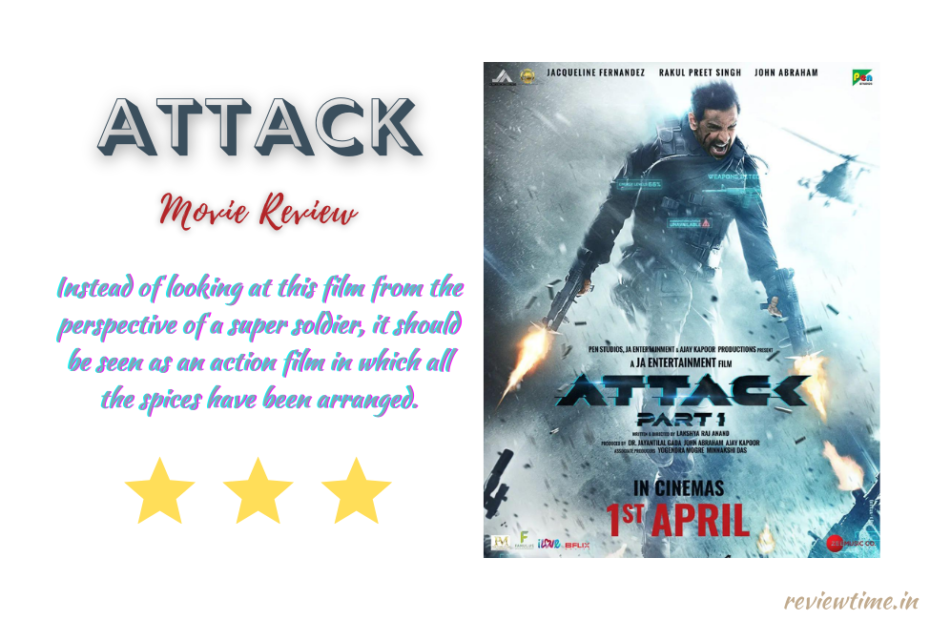 John Abraham’s Attack has been released. The film has given the country its first super-soldier. It is being said that everything can be done, it has been said above much more than normal. But still, the question comes in between that what is this ‘super soldier’? It becomes more important to understand this because when you watch the film, in this one answer you can tell whether the film is good or bad. Let me tell you my point of view…..

Terrorists have attacked the Parliament of India. The terrorists of Lashkar-e-Taiba have captured more than 300 MPs and even the Prime Minister. Now the rest of the story is there, the terrorists are showing their fear, the government is in talks with them, the army wants permission for a major attack, and Arjun Shergill (John Abraham), the country’s first super-soldier, is standing in the middle. Let’s go back a bit, Arjun is a brave officer of the Indian Army. Has done many difficult operations. His next target is Hamid Gul (Elham Ehsas). Now the terrorist attacks have become so much that the security agencies want to do something big, which no one has done.

This is where the idea of a super-soldier comes from and the scientific assembly (Rakul Preet Singh) gets to work. She prepares such a chip, on the basis of which a super-soldier can be prepared. That chip is put in Arjun Shergill and just then he gets completely transformed and the country gets its first super-soldier. Now how he is different from others, how he will be able to save or even save the people trapped in Parliament, all this will be known by watching director Lakshyaraj Singh’s film.

This new film about John Abraham is a little different. This means there is no novelty in the story, while there is a plot that keeps Bollywood in every patriotic film. But still, the thrill is felt. Even because the length of the film is less than two hours, there is no chance to think much anyway. Everything is very fast-paced, everything happens fast, there is a lot of action, big bangs, and the film is over. Here everything is there in the attack, don’t look for logic and just enjoy what is happening on the screen. If you do this, you will like this film with John.

Before talking about acting, let’s talk about the issue which was mentioned in the beginning. After all, who is this super soldier? Now if you look at the old articles, then it comes to know that many countries of the world are working on this. But the thinking of Super Soldier is only for him that a person who does not have the effect of cold-hot, on whom the bullets are ineffective and he can carry out the operation faster.

Now the attacks come on the film, here the super-soldier is such whose action is not making him ‘super’. Actions are done in a normal way, our country’s first super-soldier is also doing just that. Nothing like this has been shown above super. Yes, it has GPS, can map any place in its mind, and can act as a guide for a fighter. So now you decide whether it should be such a super soldier or else it should show some more power.

The cast of Attack has been carefully selected. John Abraham has appeared perfect for this role. Perhaps it does not seem right for anyone else to appear in this role other than him. Action is his plus point, acting has also become very easy. Jacqueline Fernandez has also been kept in a very small role. Her character has definitely been described as important in the story but has not kept much to do for the actress. Hardly some scenes have gone to his account. Rakul Preet Singh has definitely impressed with her work. Have seen her in a comedy role, but something serious had to be done here. A scientist has been created. She’s done a great job. The authority or self-confidence needed for such a role was in her.

The work of Elham Ehsas, who was seen in the role of a terrorist, will also be called right. His style of speaking confused me a bit but in terms of character he suits. As the head of the security agency, Prakash Raj did not have much screen space. But even in that limited time, his work will be noticed.

Director Lakshyaraj Singh will also have to be praised. It can prove difficult to keep the audience engaged for a long time in an action-based story. But he has done so. His full focus has been on the action, but at the same time, there is a bit of emotion and a bit of comedy. Because of this, the boredom scope ended and the film started looking entertaining. Yes, the logic was definitely missing in some places, rather it should be said that it happened on many occasions, but because we were not even expecting it, it did not make any difference.

So our idea is that instead of looking at this film from the perspective of a super soldier, it should be seen as an action film in which all the spices have been arranged. Take a look, it might look good