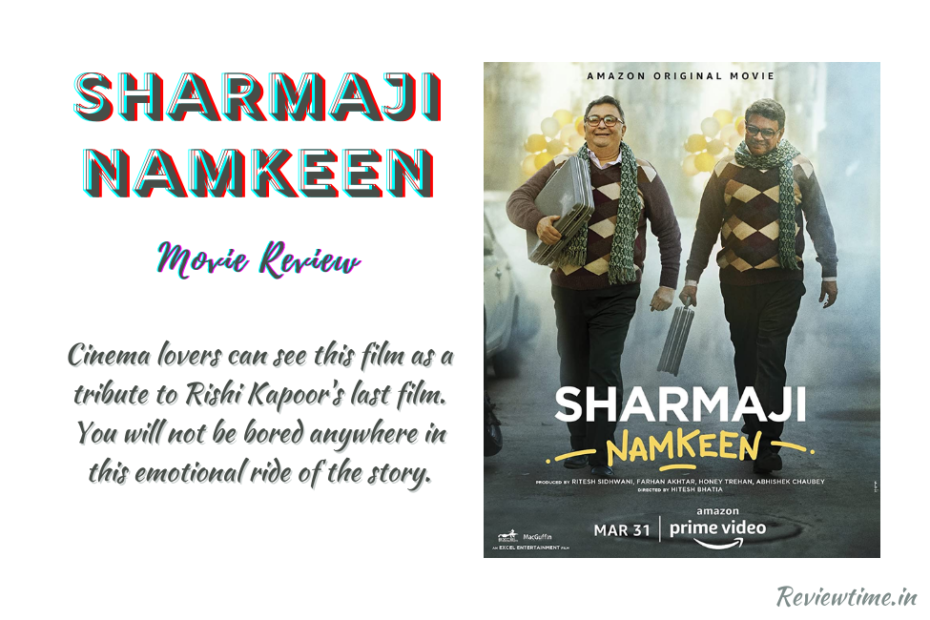 The film Sharmaji Namkeen begins with a video of Rishi Kapoor’s son Ranbir Kapoor, where Ranbir explains that during the shooting of the film, Rishi left this world, and Ranbir also resorted to prosthetics so that the film was completed but it did not work out. . In such a situation, Paresh Rawal joined this film and carried forward the character of Rishi Kapoor, for which he is wholeheartedly thankful to Paresh.

The story begins with the retirement of Sharma Ji (Rishi Kapoor) whom he is given VRS two years back. Sharma Ji, the father of two children, is carrying out the responsibility of both mother and father at home. From cooking to filling the bank and bills, Sharma himself does all the work. Even after retirement, Sharmaji wants to keep himself busy. In such a situation, he sometimes goes to Zumba class and sometimes spends days in search of a job.

Cooking is an art for Sharmaji, the food prepared by him is being praised by the whole locality. Sharma starts his second innings with this passion and gets the first order of Ladies Kitty Party. However, this passion of his proves to be an embarrassment for his children. You will have to watch the film to know what decision Sharmaji takes after facing jokes in the family, anger in the eyes of children, etc.

Film director Hitesh Bhatia has woven the storyline against the backdrop of Delhi. The narrow roads and living conditions of Delhi have been well presented on the screen. Talking about the direction, it is very difficult for the audience to blend the same character between two different actors, the director has also been very successful in this experiment.

Paresh Rawal has to be praised that he has brought this character on screen as a tribute, no one does this. Seeing the story of the film, it will feel as if all this has happened with or around you. Due to the relatability, the story keeps the audience hooked. Looking from the point of view of Rishi Kapoor’s last film, you will not be able to remove any loopholes in this film. Somewhere the emotion will be seen dominating. Food lovers will like this laughing-tickling film. While some dialogues like Baghban should be made compulsory in children’s courses, the undercurrent chemistry between Rishi Kapoor and Juhi Chawla definitely leaves a smile on your face.

Rishi Kapoor, who was fighting cancer during that time, proved again that no matter what the situation, the show must go on. Whenever Rishi comes on screen, it becomes difficult to accept the fact that he is no longer in this world. Paresh Rawal seems to be very cautious in acting in the beginning, but his spontaneity starts showing further. Sharma Ji’s son Suhail Nair has done full justice to his role. Juhi Chawla and Ayesha Raza, Shiba Chadha, who is involved in the kitty gang, have brought the typical Delhi housewife on screen in the best way. Parmeet Shetty has left his mark in less screen space. Satish Kaushik is comfortable as a Punjabi friend.

Cinema lovers can see this film as a tribute to Rishi Kapoor’s last film. You will not be bored anywhere in this emotional ride of the story. In the end, there is no rating for this film because Rishi Kapoor’s performance cannot be tied to the review.