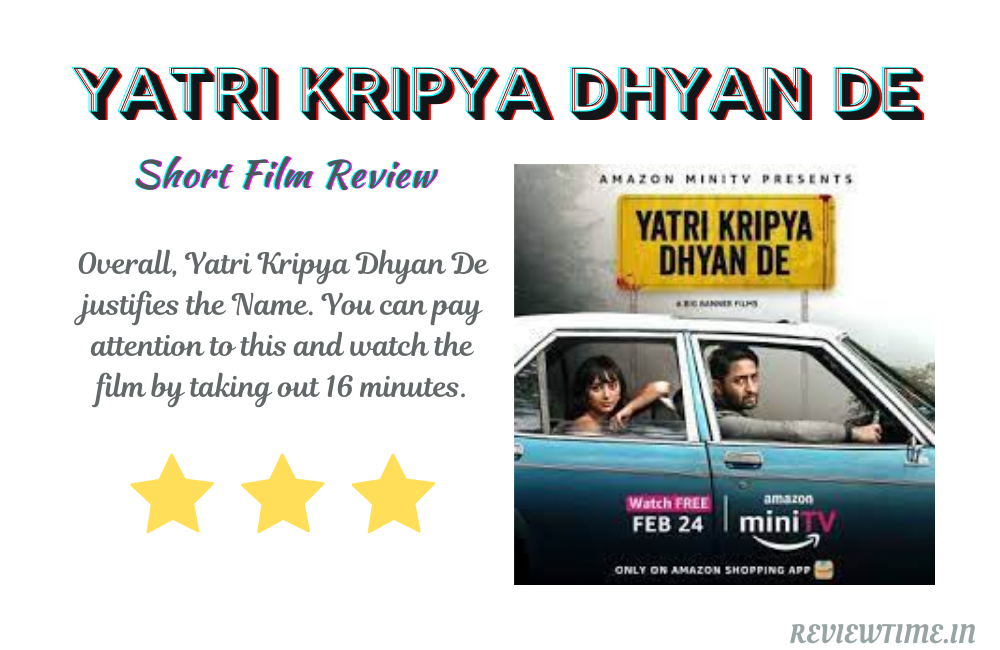 The short film Yatri Kripya Dhyan De came on Amazon Mini TV. After watching the trailer, the excitement of watching the film increased. The trailer was quite promising. The trailer full of mystery and suspense was quite catchy. This is a short film, so its review will also be in short. Will talk about what is special in the short film of Shahir Sheikh and Shweta Basu, whether it should be seen or not and what things are missing.

Whether the film is short or long, the most important part of it is the story. If the story is interesting, then the rest of the things can be compromised a bit. The same happened with this film. The story is of Sumit, a medical coder who also runs a homestay. Who meets Nandita on the deserted road of a silent hill station. Nandita, whose car is damaged. She asks Sumit for a lift. All the tweets and turns start when these two creatures sitting in the car start talking about ghosts, spirits, bad spirits, and an old unsolved death mystery.

Abhinav Singh’s hand as a writer is very tight. Cut to the point talk in less time. He does not write a single line extra in his writing. There is no work to increase the length of the film or drag the story. This short story of a road trip at the hill station keeps you tied like a seat belt the whole time. And the ending happens completely unexpectedly.

Abhinav Singh has also directed Yatri Kripya Dhyan De. The framing of the scene is accurate. What is going to happen next, its preparation is done in the earlier frames. Good work has been done on the screenplay. Small details have been taken care of. Like drinking Nandita’s water after talking about a thirsty soul or a statue of Money Heist in Sumit’s car. Each frame has its own importance. An attempt has been made to create horror with lights and camera angles. The whole story is shown from the four-angle camera set up in the car itself.

The cinematography of the film is quite good according to the small budget. In the starting itself, the beautiful hill station of Kerala is shown with aerial shots and long shots. Which creates the effect of a silent hill and deserted road.

The first thing was Sumit. Which is played by Shahir Sheikh. He is a well-known actor. He has appeared in many TV serials. The special thing about Sumit is that he considers himself a pro. He feels that he is absolutely perfect and all the work should be done according to his will. Frustration is clearly visible in him even while arguing with the homestay secretary over the phone.

On the other hand, Shweta Basu has played the role of Nandita. Shweta is adept at playing her character who can forget his double role acting in the movie Makdi. Nandita has maintained mystery with her acting in this short film as well. Like the anthology film Ray on Netflix, here too his character is absolutely mysterious. Talking about ghosts and spirits, Shweta’s expression is worth watching.

The length of the film is so short that it is tough to manage everything in less time. Yatri Kripya Dhyan De seems to be missing even after everything is fine. The story of Sumit’s buildup is left as it is. The background score of the film is nothing special. Due to this, the story becomes weak at some point. The first and last points of the film are on a high note, but in the middle parts, the film is unable to maintain its excitement. And this is its weak link.

Overall Yatri Kripya Dhyan De justifies the Name. You can also pay attention to this and watch the film by taking out 16 minutes. Well, even if you do not want to see it, you will not miss any big thing.