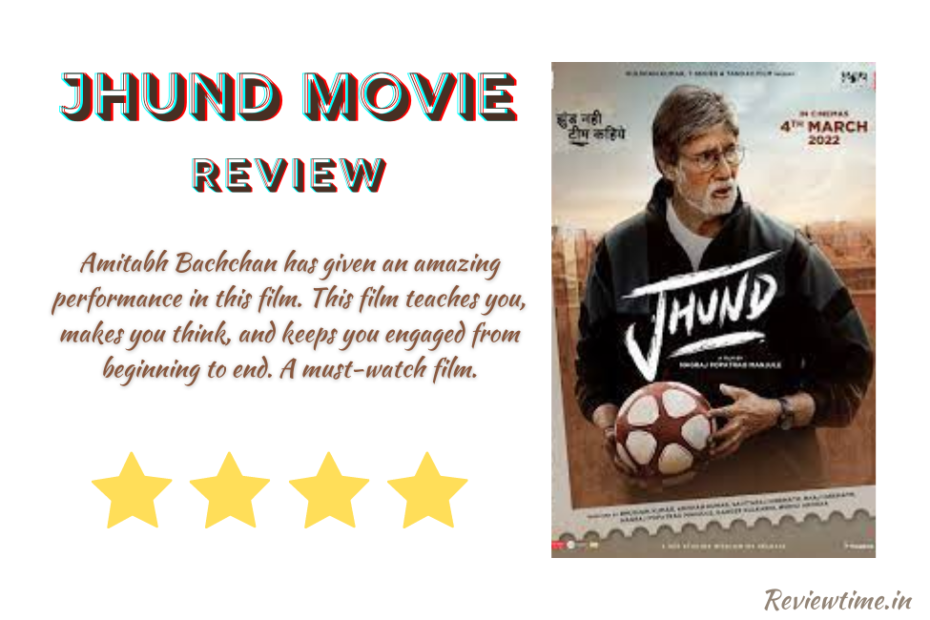 There is a world beyond this clean, walled, educated world of ours as well. The world is different from ours. Which we fear, we also hate, and which is also involved in our lives in one way or the other. I am talking about the slum and the people living in it, about whom directors Nagraj Manjule and Amitabh Bachchan have brought a wonderful story related to it.

This story of the Jhund movie is based on the life of Vijay Barse. Vijay is a retired sports professor from the college, who has given football training to countless slum children and has also founded an NGO named Slum Soccer. Amitabh Bachchan’s character Vijay Borade tells the story of this victory.

Vijay Borade is nearing his retirement. In such a situation, he goes across the wall of his colony and sees children playing with a box. The idea comes to Vijay’s mind, after which he promises to give 500 rupees to the children to play for half an hour. That’s just where the story begins. With the help of the game of football, Vijay Borade starts improving their lives by removing those children from things like drugs and crime.

Amitabh Bachchan has given an amazing performance in this film. Here he appeared in the role of a retired professor, who is helping people at his own expense. He is also upset but the dreams of others cost him more than his own troubles. Amitabh has played the character of Vijay Borade in a wonderful way. Seeing him, it seems that he is actually Vijay. The best part is that he has not overshadowed any fellow artists but has helped to refine their work. In the film, you get the most attention from characters like Ankush Masram aka Don, and Babu. The struggles of Don’s life bother you and ask you to hope for the best, then Babu’s words make you laugh. Nagraj’s film Sairat’s actors Rinku Rajguru and Akash Thosar are also in this film and both have done a great job.

Nagraj Manjule has done an amazing direction. Also, you will see him while acting in this film. Nagraj has written the story of Jhund and made it very beautifully. This film teaches you, makes you think, and keeps you engaged from beginning to end. Full of colorful characters make the first half of the film full of energy and fun, while the second half is full of drama. Many issues have been raised in this film, which includes caste division, women’s rights, the judgment of society. Some will make it a powerful film and some just distract you. One of the drawbacks of Jhund is that it is a very long film, so you have to be patient in the second half. The music of the film is given by Ajay-Atul. Their music works great in Nagraj’s film.

So make a plan to see the Jhund this week.