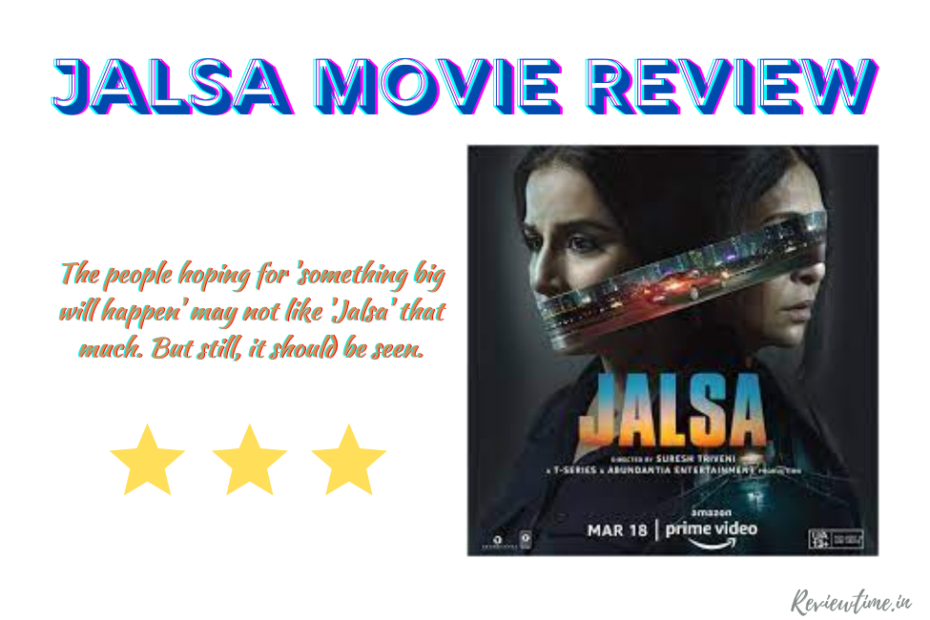 Amidst releases like ‘Bachchan Pandey’, ‘Bloody Brothers’ and ‘Apharan Season 2’, another film has arrived this week, ‘Jalsa‘. Vidya Balan and Shefali Shah are leading this film released on Amazon Prime Video.

The film starts on a late Friday night. We meet a boy and a girl, about whom we know nothing. There is a dispute between the two about something. The girl runs on the road and, then she is hit by a car. Then we go back a few hours from this accident. To a journalist named Maya Menon, whose role was played by Vidya. Maya runs her own YouTube news channel and works on her terms. On the other hand, she has a maid called Ruksana. Whose role is played by Shefali Shah? Ruksana does not consider her work small, she is a self-respecting woman. What is the effect of the incident at the beginning of the film on the lives of these two women, this is the rough story of the film.

Why is the title of the film ‘Jalsa‘, it is understood at the very end. There is no loud moment in the journey to reach there. The film feels like a slow burn. The major incident of the film happens in the first five minutes itself. After that only we get acquainted with the restlessness, anger, and guilt of the characters. There are before and after transitions of the characters of Vidya and Shefali, who follow the pace of the film in such a way that they do not seem abrupt. At first glance, Vidya’s character Maya appears like a confident journalist. Don’t be afraid to ask uncomfortable questions to even the most influential guests. But then the Maya after the accident seems completely opposite. Vulnerable, frightened. Whose fingers tremble. Looking at Vidya, it seems that she did not face any problem in playing both the parts.

Seeing the Ruksana became Shefali Shah, one may feel a connection but does not feel pity. Shefali’s mannerisms will not make it seem that she is acting like a lower economic class woman. She speaks as much as she needs. The rest is for the eyes. The dialogues of the film are remembered by speaking, which was kept absolutely common language. The influence of cinema is also visible in the colloquial language of the middle class.

After talking about all the positive points of the film, now let’s talk about the part that struck me. In the film, a trainee journalist is busy investigating this hit-and-run case. He gets all the big hints one by one, from some of his sources. It is never known how this investigation became so easy for her. It knocks in terms of writing.

The people hoping for ‘something big will happen’ may not like ‘Jalsa‘ that much. But still, it should be seen.