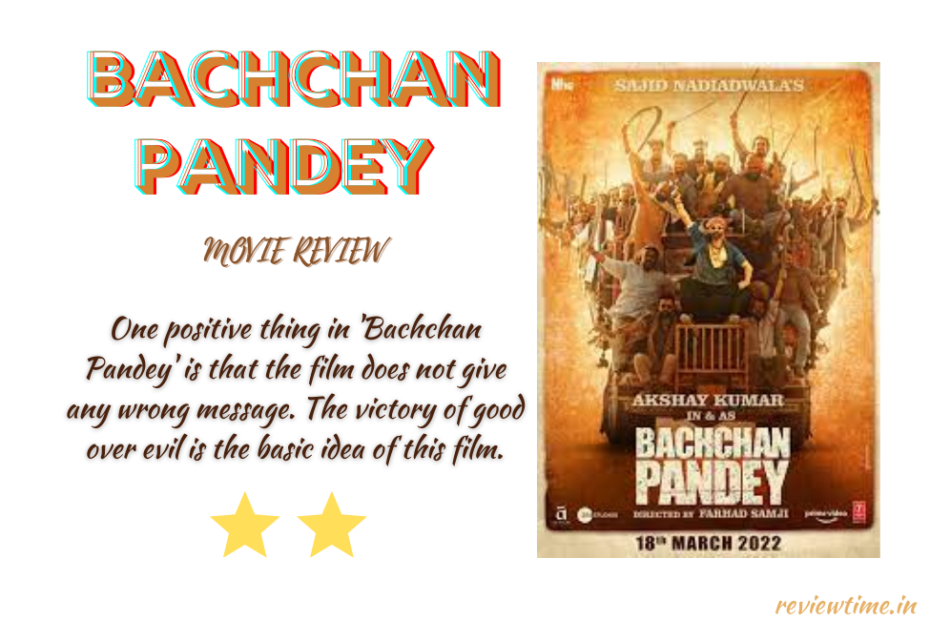 ‘Bachchan Pandey‘ is the story of a girl named Myra, who wants to make a film. He comes to know about a gangster. Myra decides to make a film about his story. She goes to Baghwa village with her friend Vishu for research work on the subject. The film does not tell in which state Baghwa falls. From the accent of the characters, it seems that this is a village in UP-Bihar. Here is the story of a gangster named Bachchan Pandey. Bachchan burns a journalist alive just because he had printed a cartoon photo of Bachchan Pandey. He travels in a vehicle numbered UP 60, which is the RTO code of the Ballia district of Uttar Pradesh.

Well, Bachchan Pandey gets to know that Myra and Vishu are gathering information about him. Before Myra and Vishu can escape, they are caught. Both tell Bachchan Pandey that they want to make a film on his story. Bachchan feels that if a film is made on his story, then his name will spread far and wide. More people will be afraid of him. He agrees. But it has one condition. The condition is that he will do his own role in his film. You will have to watch ‘Bachchan Pandey‘ for what happens next in the story.

‘Bachchan Pandey‘ is a masala entertainer who had a funny story to tell. But in the process of making that story North Indian, the film’s fleet gets bogged down. One, the filmmakers here need to understand that adapting a film according to the sensibilities of the local audience does not mean considering them as dumb. You think the public is so stupid that you start showing anything in the film. There is a scene in ‘Bachchan Pandey‘ when Akshay’s character throws a snake out of Jacqueline’s pants. I do not understand what the director wants to say through this scene or what does he want to make the public feel?

At the beginning of the film, Bachchan Pandey is shown as a man who has no faith or religion. He kills people simply because he enjoys doing so. Even after all this, two of Bachchan’s companions, Pendulum and Kandi, tell that the man is his hero. Why? Because Bachchan Pandey knows the ‘value of love’. By the value of love, he means that if your love is not complete, then you start killing people. In the film from beginning to end, it is tried to tell that ‘Bachchan Pandey‘ is a very bad and dreaded man. But in the last 15 minutes, he has a change of heart. The logic behind this is what tells the difference between a good and a bad masala film.

Akshay Kumar has played the title character of ‘Bachchan Pandey‘ in the film. According to the demand of the story, over the top has also been performed. You can’t find fault in his performance. Kriti Sanon has become an aspiring filmmaker named Myra. Kriti has played an almost parallel lead role in this film. That is, there is something to do for them. She was not just dancing to the song with the hero. She is trying to make a film about a gangster. Kriti looks fine in this role. Arshad Warsi has played the role of Mayra’s friend Vishu. Arshad Warsi looks funny even if he doesn’t do anything on the screen. But here he is not able to make the public laugh even by trying. While he has a good amount of screentime in the film.

Apart from these people, Abhimanyu Singh, Sanjay Mishra, and Prateik Babbar are also a part of this film. But they don’t have much to do. ‘Bachchan Pandey‘ has two guest appearances. The first is Jacqueline Fernandez, who appears in only one song. There is a story in that song. But neither you can remember that song nor can you convince its story. Pankaj Tripathi is seen in the role of Bhavesh Bhopal, an acting teacher who trains Bachchan and his gang. That character does not add anything special to the story. But the only genuine funny part of the film proves to be. Seema Biswas plays Bachchan Pandey‘s mother in the film, who doesn’t talk to her.

However, one positive thing in ‘Bachchan Pandey‘ is that the film does not give any wrong message. The victory of good over evil is the basic idea of this film. Bachchan Pandey can be seen in cinema halls.