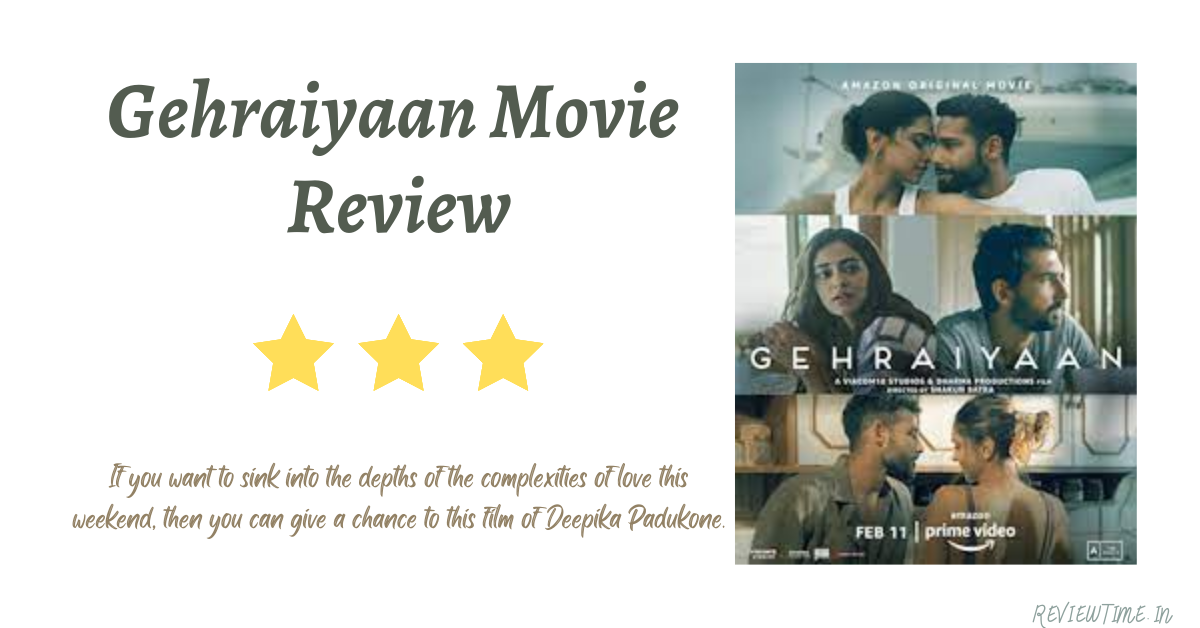 The matters of love, relationships, and marriages are as easy as they seem from the front, they are equally difficult from the inside.

Shakun Batra’s film Gehraiyaan is a complicated story of coming out of one’s past and falling in love. In this film, there are lies, deceit, truth along with love, and also the entanglements wrapped in relationships.

Although we all have seen stories of affairs and infidelity after marriage being made many times in Bollywood, ‘Gehraiyaan‘ shows this topic in more depth. Despite a relationship in the film, the reasons for its end have been talked about. This film is progressive and at the same time, you also get attached to it.

This is the story of Alisha, Tia, Karan, and JN. Alisha (Deepika Padukone) is yet to heal the wounds of her past. Because of this, his relationship with his father (Naseeruddin Shah) is bad. Also, Alisha is not able to fly big in her career. Karan (Patience Karva) is Alisha’s boyfriend, who quits his job to become a writer. But he is also struggling to write his book. Tia (Ananya Pandey) is Alisha’s cousin. Tia’s life is full of ash and comfort. Together with him is his fiance JN (Siddhant Chaturvedi), who has made a big name in the business industry after coming from a small house and is the owner of crores.

JN and Alisha may have found partners in their lives, but both still feel incomplete. The relationship of both is not going well for their partners. Alisha and Karan fight every day and JN doesn’t feel the same way for Tia anymore. In such a situation, when JN and Alisha meet each other, they get what was lacking in both of their lives. But if the relationship was so straight, what was the matter?

This story is full of suspense and drama along with a love story. Deepika Padukone has looted the gathering by doing a great job in the film. Deepika has caught the pulse of complex characters in such a way that she only shows them by doing wonders. There is a lot of power in the performance of Siddhant Chaturvedi. But they also need more polish. Dhairya Karva has played his character well. Ananya Pandey’s work is also fine. As the film progresses, Ananya is given a chance to showcase her acting talent. You can never doubt the work of actors like Naseeruddin Shah and Rajat Kapoor.

Some scenes in the film can make you feel uncomfortable, so I am giving you a trigger warning. Also, the bold scenes of Deepika Padukone and Siddhant Chaturvedi do not have as much power as there was noise about them.

The cinematography and music of Shakun’s film make it splendid. Also, the speed of this film matches its story. Shakun has made this film as deep as possible. The emotions of his characters have been kept open in front of the audience. He has co-written this film with Sumit Roy, Ayesha Davitre, and Yash Sahai. The depths make you feel a lot, but still, there is something missing in it. Many complications in the film are solved very easily. Despite some shortcomings, this story manages to keep you hooked from beginning to end.

If you want to sink into the depths of the complexities of love this weekend, then you can give a chance to this film of Deepika Padukone.