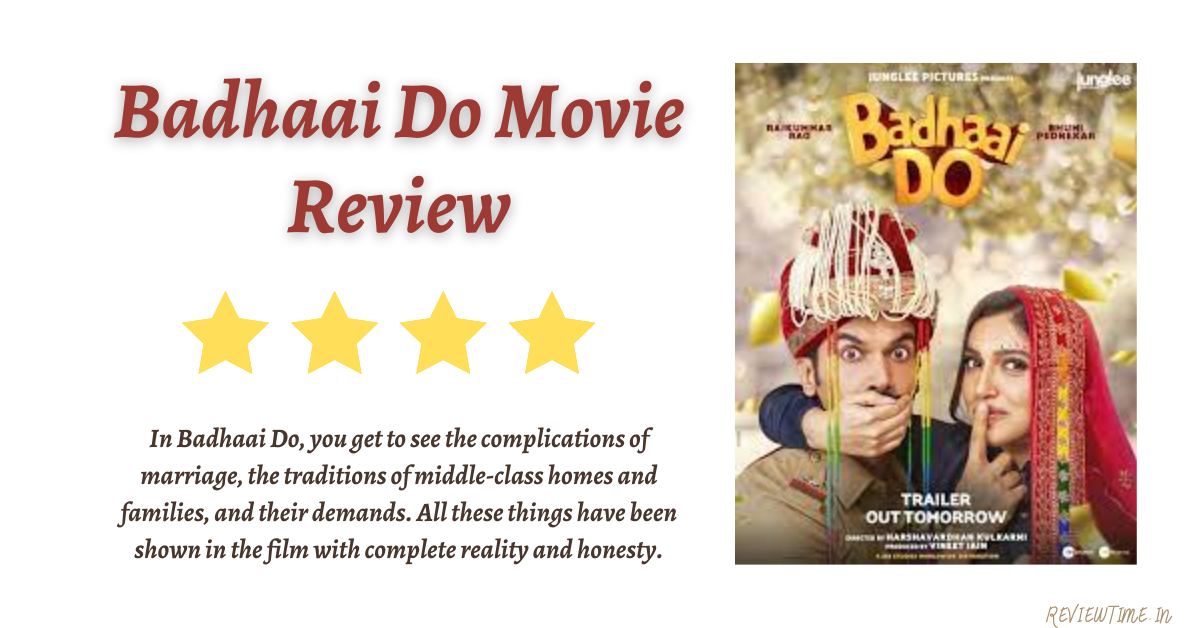 It is said that pairs are made in the sky… but what about those couples who are in a compulsion to be with each other? In which you have to compromise your reality and fear every moment thinking that my truth may not come in front of everyone. Are they also made in the sky?

One such marriage is Lavender Marriage. This marriage takes place between two people who are homosexual. People do this marriage agreement marriage for different reasons. Some to get their place in society. So some to avoid the stigma of being a bachelor, some to be able to live their life freely under its guise. Rajkummar Rao and Bhumi Pednekar’s new film Badhaai Do is about this lavender marriage and the struggle between Shardul and Sumi to hide their reality and live freely.

Badhaai Do‘s story is about Shardul Thakur (Rajkumar Rao) and Suman Singh (Bhumi Pednekar). Shardul is part of the gay community and Suman aka Sumi is lesbian. Both are living their lives with their respective struggles, hiding their lives from the eyes of the world. When Shardul and Sumi’s life becomes one after marriage, both think that now they will be able to live peacefully with their real partners. But both of them did not even think about what happens next.

Shardul and Sumi feel that by getting married they will be able to live with the partners of their own free will. But their marriage involves not only freedom but keeping the truth hidden from family, friends, and even neighbors. This sword hangs on the neck of Shardul and Sumi all the time that what will happen if someone comes to know about their truth. Together, there are other struggles coming in the marriage of both, whose solutions also have to be taken out by both themselves.

Rajkummar Rao has played the character of Shardul Thakur in the best way. Rajkumar has engrossed in his character in such a way that you do not think that Shardul is fictional, a character of a film. In the role of a gay cop, Rajkummar Rao has masterfully portrayed his character’s insecurity, fear, hesitation, and even the toxic masculinity he learned from childhood. On the other hand, Bhumi Pednekar is emotional, sensitive, and brave in the role of Sumi. Sumi may be hesitant to tell her family that she is a lesbian but she is not a coward.

Chum Darang plays the role of Bhumi Pednekar’s partner Jhilmil in the film. It can be said that his Bollywood debut was successful. In Badhaai Do, Chum got to play a parallel lead, which happens rarely in Bollywood with actors from the Northeast. Seema Pahwa, Sheeba Chadha, Lovleen Mishra, Nitesh Pandey are the supporting cast in this film. Everyone has played their characters well. Sheeba Chaddha has done a great job in a few words. Actor Gulshan Devaiah’s cameo is worth watching in the film.

Director Harshvardhan Kulkarni has filled the emotions as well as comedy in the film Badhaai Do. He has shown in the film how people fall alone while hiding their truth. The thing that strikes a person the most is that he cannot openly talk about his life with his loved ones.

Harshvardhan has tried to show the gay and lesbian community in a normal way through this film. In Badhaai Do, an attempt has been made to normalize that the people of the gay and lesbian community are no different from us and you. He is as human as you and I are. They hurt as much as we and you. They have the same emotions as we and you. So if we can live our lives openly, then they can also live it, can’t we? If we have the right to love then they should have it too.

In Badhaai Do, you get to see the complications of marriage, the traditions of middle-class homes and families, and their demands. All these things have been shown in the film with complete reality and honesty. The first half of Badhaai Do is a bit slow, but the second half will make your heart happy, as well as make you emotional. The music and sound design of the film are quite good. This film will encourage you to talk and will also entertain you.