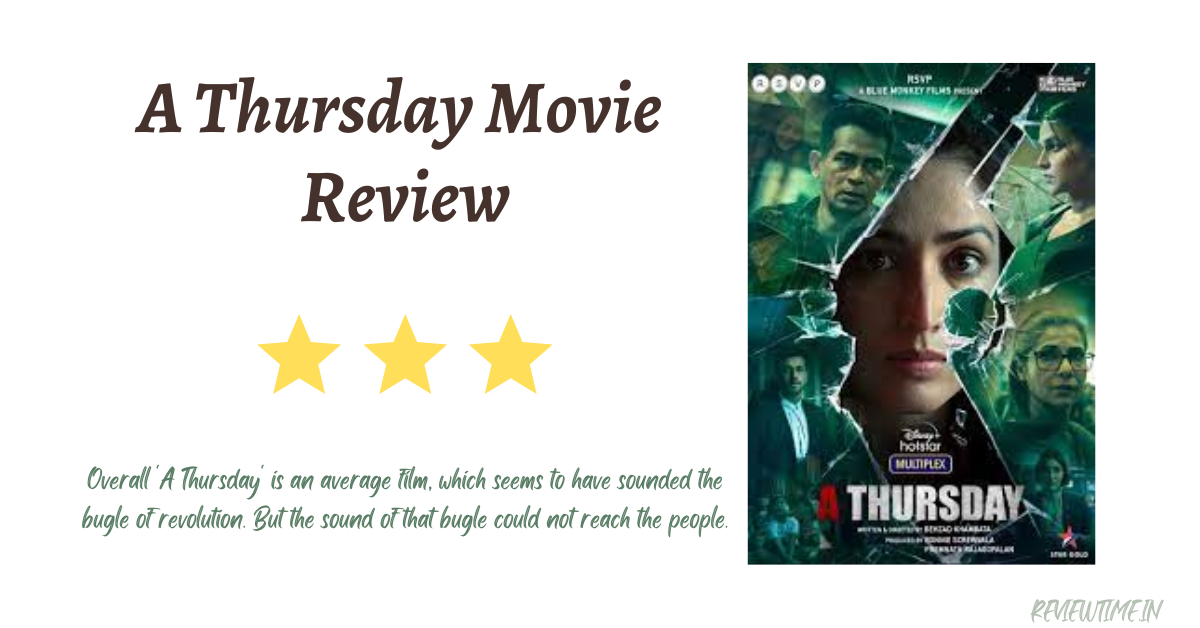 A new movie has been released on Disney+Hotstar. Its name is A Thursday.

The story of the film is about a girl named Naina. He has studied law. But she is a teacher in a playschool. Just before her 30th birthday, Naina takes a hostage to 16 children studying in that school. That is, takes those children hostage. She calls the police herself and informs them about it. She has some demands. If they are not fulfilled, she will kill those children one by one. Her biggest demand is that she wants to talk face to face with the Prime Minister of the country, Maya Rajguru. Now the question is why is Naina doing all this? And what does she want to talk to the Prime Minister?

‘A Thursday‘ sounds like a spiritual sequel to Neeraj Pandey’s Naseeruddin Shah starrer ‘A Wednesday’. More or less wants to copy the same concept with a few modifications. But the specialty of ‘A Wednesday’ was its tight screenplay. ‘A Thursday’ fails in this department. What this film wants to say is a debatable topic in itself. For which crime should there be a provision for the death penalty? But it takes a long way to reach here. During this, the media hungry for clickbait and breaking news are also commented on. The ironic thing is that the film itself, which uses violence and mental trauma in the name of content, justifies the media’s doing so. We are asking this not to defend the media, but to criticize the film.

‘A Thursday‘ advocates a serious issue. But she keeps on reducing her weight in order to make her subject look bigger. Hence this film becomes predictable. Before the climax arrives, you anticipate what is going to happen. In ‘A Thursday‘ you will get to see a lot of close-up shots of Yami Gautam. This thing makes you feel as if you are being pressured to feel the emotion that Naina is feeling. This thing happens many times. Which seems repetitive. There are no songs in the film. But the background music also does not give much emphasis to the narrative. Basically, looking at ‘A Thursday‘, it seems that this film has been made a few years ago, which has reached the audience now. In other words, its treatment is quite dated.

Yami Gautam played the role of Naina Jaiswal in the film. Naina is an author-backed character. Because this entire film is about the same character. Yami Gautam is doing such a role for the first time in her career. She looks good in this role. It happens many times that actors add value to a character. That is, his performance elevates the film high. Yami would not do anything like this in the character of Naina Jaiswal. But their performance is not such, for which you cut their numbers. Apart from Yami, Neha Dhupia also appears in the film. She has played the role of a pregnant police officer named Catherine, who is handling Naina’s case. Her character is reminiscent of Alicia from ‘Money Heist’. But there is nothing except talking in his walkie-talkie.

Atul Kulkarni has played the role of a police officer named Javed Khan. Naina and Javed have an old connection. But Javed is a very strange character. He looks at women with the same worn-out attitude. Atul’s performance could have been better had he had some lawful scenes in his account. Here all the actors have been woven around the character of Yami. Apart from Naina, no one is given any importance. PM Maya Rajguru played by Dimple Kapadia is the only character who stands out. Because she is an important character from the narrative point of view of the film.

‘A Thursday’ presents itself as a female-oriented film. In which a woman stands up for the issues related to women. It had all the qualities to be a great thriller film. But the length of the film comes in the way. By the time the story begins to unfold after a heavy build-up, the audience has left it. At the end of the film, some one-wired scenes are also seen. As if the film itself is patting Naina on the back – well done. I didn’t understand the idea behind it. Overall ‘A Thursday‘ is an average film, which seems to have sounded the bugle of revolution. But the sound of that bugle could not reach the people.