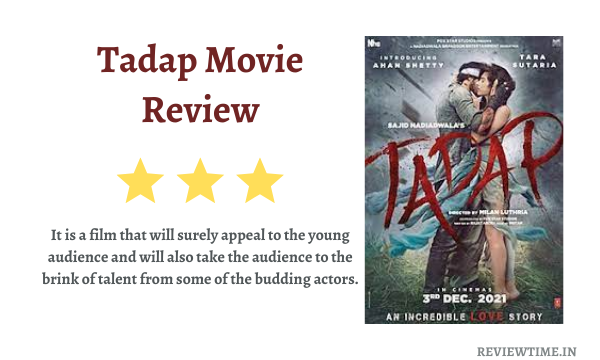 Finally, the day has come when Ahan Shetty, son of Bollywood actor Suniel Shetty, has entered the Hindi film industry with the film Tadap. Directed by Milan Luthria, the film stars Ahan in the lead role while Tara Sutaria plays the lead actress. The Tadap movie is the official Hindi remake of the Telugu film, RX 100, which was based on a real incident.

The film revolves around the lives of Ishana (Ahan Shetty) and Ramisa (Tara Sutaria). As the movie begins on a thrilling note, we are introduced to Ishana’s second form, a changed person after his girlfriend gets married to someone else. The story then moves in the direction of what really happened between Ishana and Ramisa.

For starters, Ramisa returns from London to her father’s (Kumud Mishra) house in Mussoorie. At this time, Ishana and his father (Saurabh Shukla) are close to Ramisa’s father. Ramisa’s father is a local politician. Everything seems fine until Ramisa’s father joins the government and her attitude towards Daddy and Ishana changes. At the same time, the romance between Ishana and Ramisa has been shown in the film. Much to Ishana’s disappointment, Ramisa gets married to a boy from London. Since then there have been many twists and turns in the film.

Though it may sound like a revenge love story from Ishana’s ending. In the second part of the film, the makers have an unexpected twist that takes everyone by surprise. The climax is one of the major highlights of the film which is worth watching. Apart from this, Ahan’s dedication and hard work are clearly visible in his performance. On the other hand, Tara has been seen playing her role as Ramisa. Her character in the film Tadap is quite different as compared to her roles in her previous films.

Apart from Tara and Ahaan, Saurabh Shukla and Kumud Mishra have also done a good job. Director Milan Luthria has made the best use of the location of Mussoorie to give an immersive cinematic experience to the audience. The soundtrack of Tadap is not that interesting, except for Tumse Bhi Bhi Songs.

Overall, Tadap could have been packed well by chopping a few forced-looking scenes in the film. It is a film that will surely appeal to the young audience and will also take the audience to the brink of talent from some of the budding actors.