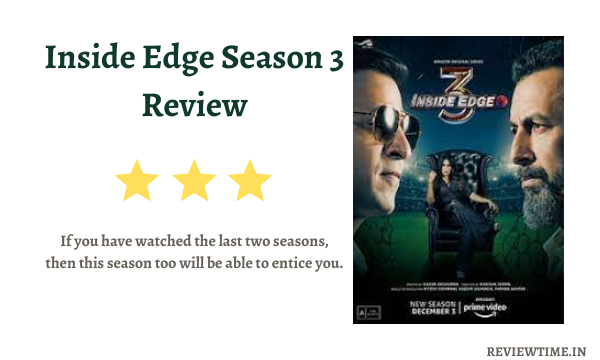 This weekend many movies and shows have come on theaters and OTT for your entertainment. Out of which, today we will review “Inside Edge Season 3″.

Like every show, Season Two of Inside Edge also ended with a cliffhanger. Where the Mumbai Mavericks were banned for two years. Bhaisab had imprisoned his own daughter Mantra Patil as an accused in the fixing case. And Zarina Malik joined hands with Vikrant Dhawan.

The story of Season 3 starts from scratch. Where Bhaisab’s Lanka is on all sides. One, Vikrant is back and along with Zarina is making every effort to take Bhaisab to jail. The second brother-in-law’s daughter Mantra, whom he got a package of free funds for the lockup, is also angry. This time the cricket in the show has also gone from the Premier League to International. Now, there is a match between India and Pakistan cricket teams. Where the President of the Indian Cricket Board, Yashvardhan Patil alias Bhaiya Ji, is also engaged in making big money in the match between India and Pakistan. But Bhaiya Ji and other high-profile batting masterminds like him get water on ‘Paisa Banana Ke Pher’ when betting is legalized in India.

But Bhaiya Ji is also a heavy driver. Not ready to leave the field so easily. They keep trying to find a solution to every problem. Now stream ‘Inside Edge Season 3‘ on Amazon Prime to know whether he succeeds or falls in this cricketing Kurukshetra.

This time the story brings to the fore the politics of reaching the upper positions of the cricket board more than the cricket ground and locker room politics, the political equation behind the matches of countries like India-Pakistan, the game of broadcasting rights, and many such aspects. Unlike the previous season, this time the story runs in a time travel chronology. Throughout the show, the story of Bhaisab, Vikrant, Zarina from childhood to growing up is shown in flashbacks. Due to which you get a better understanding of the present behavior of these characters. Here the show’s production designing team is to be commended. Whatever cricketing setup the film has, it looks authentic to a great extent. The crafting of cricket matches also looks real.

Well, all is not only good but there are also some disadvantages too. Although the show starts with a good pace, after five episodes things start to cool down and only humming remains till the climax. One reason for this is the length of the show, where each episode is somewhere between 40 and 50 minutes. The second reason is the change of heart of the characters in the last episodes in a wholesale sense. Can’t tell the name, it will be a spoiler, but in a single episode suddenly so many people have a change of heart that even Champak Chacha eats the complex.

What makes ‘Inside Edge 3‘ interesting is its real writing. Karan Anshuman and Neeraj Udhwani have woven the screenplay of this show around many real incidents related to cricket. Whatever happens around cricket in the show reminds you of some real cricketing controversy. During India-Pakistan, from the curiosity of the common man to the mind games of the leaders seen in the ground, the show has been well threaded. Another good thing about the writing is that all the characters in it are very layered and grey. No total is evil. Even if someone is doing a bad deed, he has given its justification in his mind. Like we all give.

Aamir Bashir has also done a great job in the third season in the character of Yashvardhan Patil aka Bhaisab, who is ready to sacrifice anyone for power and power. Especially in the scenes between him and his daughter Sapna Pabbi playing the character of Mantra, he makes a different standout. Aamir was also impressive in ‘Wednesday’, and ‘Sacred Games’.

Vivek Oberoi plays the role of Vikrant Dhawan in the show. This time Vivek will be the center attraction point of the series. However, this time a different contrast of his character is seen. Richa Chadha has once again given a tremendous performance in the role of Zarina Malik. Sapna Pabbi in the role of Mantra Patil and Amit Sial in the role of Devender Mishra have once again shown their caliber well in the show. Here special mention of Himanshi Chaudhary, who skillfully portrayed Sudha Dhawan’s very ag role. Although for a few episodes, I used to consider him Surveen Chawla only.

If one-half of the mistakes are ignored, then overall ‘Inside Edge 3‘ manages to sustain with its cricketing drama till the end. Yes, there are many occasions in the middle, when the story slows down. But still, due to the rush created in the starting, you cannot stop yourself without watching the climax. So ‘Ultimate: The Final Truth’ is that if you have watched the last two seasons, then this season too will be able to entice you. Yes, if you haven’t seen it, then the story may bore you. This is our opinion. The rest of you guys are intelligent.