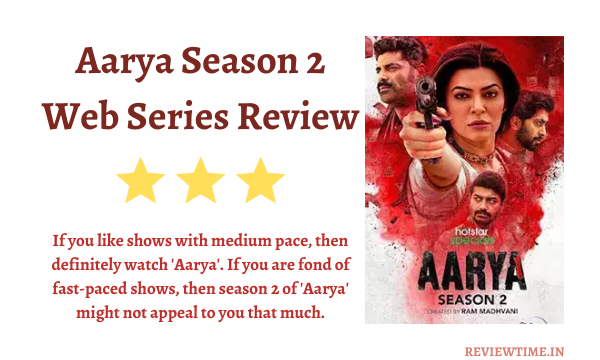 Today is Friday and today season 2 of ‘Aarya‘ has come on Disney + Hotstar. How did we like this show?

This season starts from where the previous season left off. The scene is that Aarya‘s father Zorawar Rathore, brothers Sangram Rathore and Udayveer Shekhawat are in jail for a drugs case and for killing Arkoya’s husband. A case is going on in the court for their release.

Aarya has handed over the pen drive to ACP Yunus Khan, in which there was evidence of Zoravar’s association with the Russian drug mafia. In return, Khan saved Aarya and her family from the Russian mafia and got them settled in Australia safely. But Aarya has to come back to India to testify against Zorawar and the rest in court and face the people who are responsible for her husband’s death. On the other hand, Udayveer Shekhawat wants to avenge the murder of his son by taking Arya’s life. The trouble is not only this, the Russian gang also wants its consignment of drugs worth 300 crores back in any condition.

While Aarya is fighting these mafia to keep her family safe, her children are still not able to overcome the grief of their father Tej’s death. Aarya‘s younger son Aditya gets mentally disturbed when he comes in front of his father’s killer. Aditya’s therapy begins. At the same time, Aditya’s elder sister Arundhati i.e. Aru has not yet recovered from the shock. Due to which she lives in depression and she keeps having thoughts of committing suicide. Among the three children, there is only one hero, who is fine and remains the support system of his mother and siblings. Will Aarya be able to go back to Australia and live a happy life after overcoming all these troubles or will she become a mafia herself by getting stuck here? Watch ‘Aarya‘ on Disney+ Hotstar to know.

‘Aarya‘ is the official remake of the Dutch series ‘Panoza’. ‘Panoza’ was the story of a domestic housewife who becomes an underworld don. ‘Aarya’ Season 2 is written by Sanyukta Chawla Sheikh and Anu Singh Chaudhary who are praised here. Writers have very well created Aarya’s life. The way in which he has shown the changing definitions of love, deception, changing circumstances of the family, while being associated with the real mafia story, is commendable. Yes, the story of the show is not much different from other similar shows. Due to which the thrill of that level could not come while watching the show. But still, the show manages to entertain. Most of the shooting of ‘Aarya 2‘ has also been done in Rajasthan. But the royal vibes of Rajasthan remain missing in the cinematography of the show.

Sushmita Sen plays Aarya. Aarya‘s character is battling with many complications at once. Aarya is a woman who is recovering from the shock of her husband’s murder. Who is afraid about the safety of his children. But the lioness remains against the drug mafia and for the safety of her children. It has to be said that Sushmita has handled all these situations very well in her acting. She has also been seen doing an action in the show.

The train of thrill and entertainment of ‘Aarya‘ keeps on descending on the tracks again and again. Though the train picks up a bit till the end of the episode as soon as you are set for the climax, the episode ends like a daily soap. So the whole thing is that season 2 of ‘Aarya‘ does not excite you a lot but does not bore you either. If you like shows with medium pace, then definitely watch Aarya. Yes, if everyone is fond of fast-paced shows, then season 2 of ‘Aarya‘ might not appeal to you that much. This was our opinion. Rest up to you.