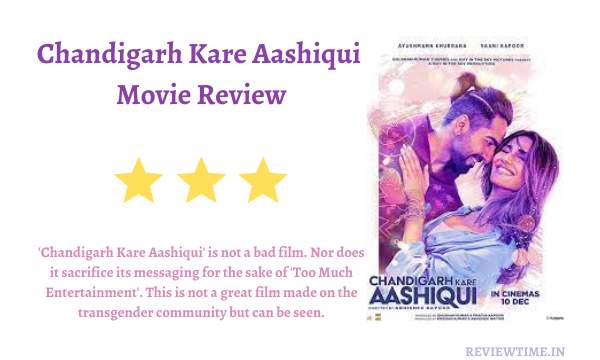 Ayushmann Khurrana’s film, ‘Chandigarh Kare Aashiqui‘ has been released. Vaani Kapoor is in the lead with him. Abhishek Kapoor has directed the film. Ayushmann, who wrapped the social message in humor, has tried something similar this time too. We will talk about what is good and what is not.

Boy and girl meet, both fall in love, then for some reason separate. The whole story revolves around the reason for their separation. Manu Munjal is a tough boy from Chandigarh. Runs his own gym, which speaks freely in his mouth. There is only one wish of brother-in-law, to become a GOAT. That is, Gabru of all time. That fitness competition, where he has been losing continuously. Manu runs his own gym and continues his training there. Then comes Maanvi, a Zumba instructor. Who starts teaching Zumba by taking gym space on rent. Gradually the bonding of Manu and Manvi starts increasing, love happens, such that it does not leave Manu’s mind.

But then at the time of their story, emotions, circumstances change. When Maanvi reveals that she is a transgender woman. Words like trans are missing from Manu’s dictionary. That’s why he gets shocked. Realizes that he has been deceived a lot. Due to Manu’s ego, the two get separated. You have seen so much story in the trailer. Now we will talk about that side of the film beyond the trailer, which is really its plus point.

Manu was a typical, desi-type guy. Keeps no pain, no gain, and more type posters. To walk with shrugged shoulders and make body-shoddy is considered to be a man. When he comes to know that Maanvi is a transgender woman, he goes crazy. Till now, without whom he was not able to live, he cried in front of her that you are a man, Manvi. I had sex with the boy. Lord pick me up, why am I not vomiting?

Manu is a victim of patriarchal conditioning. He considers it his duty to protect the honor and dignity of the woman. On which Manvi also interrupts him, that I can protect myself. Here the film did not allow Ayushmann’s Manu to become the messiah. Looking at the rest of the voice, it can be said that he has been used well as an actor in this film. In emotional scenes, he understands the pause of her dialogues, does not allow the tone to go up and down.

The film does not harm the message of the transgender community. But it is not that the film is perfect in every sense. The first half of ‘Chandigarh Kare Aashiqui‘ does not allow your attention to be diverted. The comedy sequences keep on coming. Like when Maanvi goes to Manu’s house for the first time and tells that she is an army kid. Then Manu’s grandfather wakes up and starts singing all the songs matching Maa Tujhe Salaam, Vande Mataram. Its second half ups and downs quite a lot of momentum of the film. One, the help of songs was taken on many occasions to take the narrative forward. In whose place some scenes were added, then the chemistry of the characters, their confusion would have been seen better.

‘Chandigarh Kare Aashiqui‘ is not a bad film. Nor does it sacrifice its messaging for the sake of ‘Too Much Entertainment’. This is not a great film made on the transgender community but can be seen.