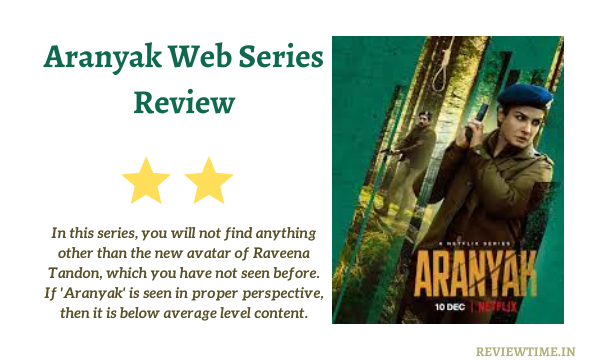 The story of ‘Aranyak‘ takes place in a fictional town in Himachal Pradesh, named Sirona. There is a forest in Sirona, from where the body of a French girl named Amy has been found. The local police there are engaged in the investigation of this matter. But the people of the area think that this action is of a supernatural killer named Nar-Leopard. A male leopard is basically a mixture of humans and leopards.

The SHO Kasturi Dogra of the police station is going on leave for a year from the day this incident takes place. In such a situation, another officer named Angad replaces him in the police station. The police have almost agreed that it is the male leopard who rapes and kills the girls. But the new SHO sir does not believe in all these things. So they try to get to the bottom of the matter. Then you come to know that after so much build-up, this series will end with a CID type end.

‘Aranyak‘ is a big confusing series. The makers of this series could not decide whether to make this series supernatural, add thriller qualities, keep it in the whodunnit zone or make a police procedural show. Therefore, this series does not fit into any of these genres or sub-genres. The whole series is spent proving that there is nothing supernatural. Humans are doing all these things. But despite the rejection of the supernatural element, the last scene hints that there was always such a thing as a male leopard.

Raveena Tandon has made her digital debut with this series. He has played the role of SHO Kasturi Dogra. In terms of Raveena’s filmography, this series must have been absolutely out-of-the-box content for her. This series would have been a little less childish had her character been spared a little sensibility and logic. Kasturi is going on a one-year break. So that he can give time to his family. Because his family is on the verge of disintegration. But he is continuing his police job even after taking leave. Whereas a new police officer has been appointed in his place. The condition of his family is getting worse day by day. But Kasturi only has to do the job. When her husband draws attention to this thing, she is told that a police job is an intoxicant.

The second problem of ‘Aranyak‘ seems to be that she pulls down her female lead i.e. Kasturi first. She is let down because she doesn’t understand work. Or the way it works is wrong. Which is rightly wrong. But as the series progresses, she becomes the hero of this story. Everyone starts following her. Her replacement suddenly starts giving her sense. Not really romance between the two but something similar starts.

Parambrata Chatterjee plays the character, Angar Malik, in ‘Aranyak‘, who has been sent from another city to Sirona. So that in the absence of Kasturi, he can handle the work of the police station. This is a character who feels exactly the same as the public watching this series. He does not understand how the people of that area can do such dumb and illogical things. This, in this series, phone records are being taken out on everything. In the end, a man turns out to be a murderer, whom no one suspected. He suddenly becomes a part of the narrative. It seemed that we are not a Netflix series, but sitting in front of the TV and binge-watching CID CID.

Ashutosh Rana is also seen in ‘Aranyak‘ along with Raveena Tandon and Parambrata Chatterjee. He keeps blowing chillum throughout this series. But in the end, they reveal the biggest secret. But you can tolerate this. Because Ashutosh Rana is such an actor that you give him any useless role. He tries his best to bring life to it with his performance. Sometimes that effort succeeds, sometimes it doesn’t. His efforts in ‘Aranyak’ could not be successful.

If ‘Aranyak‘ is seen in proper perspective, then it is below average level content. There are so many loopholes in its plot that nothing can compensate for it. In this series, you will not find anything other than the new avatar of Raveena Tandon, which you have not seen before.