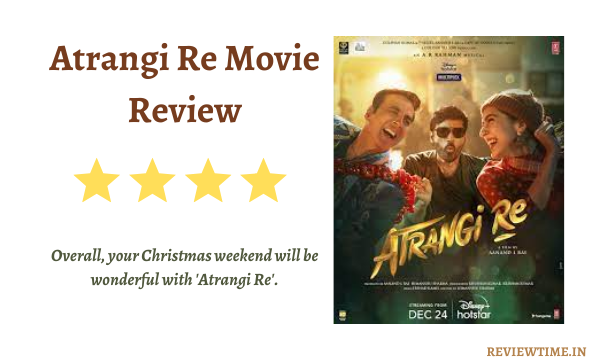 Some stories are such that seeing this, you feel that what a strange thing is happening in front of me. Even before the release of Sara Ali Khan, Akshay Kumar and Dhanush starrer Atrangi Re, director Aanand L Rai had said that you will know only after watching this film why it is named like this, and now that I have seen this film, I have come to understand that it was wrong not to trust Aanand L Rai even for a moment. Because Atrangi Re is really quite ‘Atrangi‘.

This is the story of Rinku Suryavanshi (Sara Ali Khan) of Bihar, who falls in love with a man named Sajjad Ali Khan (Akshay Kumar). Rinku, 24, has run away from her house 21 times but is caught every time. Rinku has no parents and lives in her maternal grandmother’s house. From the age of 14 to the age of 24, Rinku beat her grandmother but did not tell her the name of her lover Sajjad Ali Khan. Seeing Rinku’s antics, Nani decides to forcibly marry her.

Nani declares that “in two days, bring any two-legged boy and take out this girl.” Whatever be the caste, pat, religion, it should be from outside the city. We don’t want this girl in Bihar anymore.

What was then, Rinku’s family members go out in search of the groom and forcibly pick up our hero S Venkatesh Vishwanath Iyer aka Vishu (Dhanush). He is smelled of laughing gas and then the ‘Happiest Groom in the World’ is ready. After forced marriage, Rinku announces in front of Vishu that ‘we do not believe in forced marriage’. On the other hand, Vishu himself is worried about his marriage with his girlfriend. In such a situation, there is a deal between the two that Vishu will marry his girlfriend and Rinku will go with her lover. But if things had gone so smoothly then how would the film have been completed! That’s why Aanand L Rai has given this film a strange twist, which will definitely surprise you.

Looking at Akshay Kumar, it seems that he is playing his own role in this film. Akshay’s dialogue delivery is quite funny. Also, his role is also good. Sara Ali Khan has done what she could not do in her previous films. Yes, good acting. But she still does not know how to cry in the film. Sara’s work in Atrangi Re is very good. Seeing her, it is known that she has worked hard for her role. Sara Ali Khan shines with her work in this film as compared to the previous films.

But one person who made the entire film his name and became a ‘hero’ for Rinku as well as us, is Dhanush. Dhanush is a wonderful actor, there is no doubt about it. Every scene, every single frame is full of bows. His emotions, his fun-loving style, his shy style, and even his anger, are very good. And what to say about Dhanush’s dance!

There is no scene in which Dhanush is there and you can focus on someone else. Seema Biswas, Dimple Hayati, and Ashish Verma along with other actors have played supporting roles in Atrangi Re. Seema Biswas did a good job in the role of Rinku’s cruel Nani. But what support has Ashish Verma given to Dhanush? Ashish plays the role of Vishu’s friend Madhusudan and his comic timing is quite good. Ashish’s chemistry with Dhanush was also fun.

Aanand L Rai is an amazing filmmaker. He chooses the story of his films very carefully, you will understand this by watching Atrangi Re. But at the same time, he does not shy away from taking risks. The film also tells you this. Anand has made the film quite fun. The story is full of emotions, fun, adventure. Atrangi Re surprises you, makes you laugh, makes you cry, and sometimes you even start banging your forehead. Himanshu Sharma has written this story in a very funny way and Anand has made his film in a really strange way, which you enjoy watching. But that doesn’t mean that the movie doesn’t have any drawbacks.

Give music to AR Rahman in the film and it can’t happen if he doesn’t talk about it. The credit of making Atrangi Re‘s song Chaka Chak more famous goes to Sara Ali Khan. There is no doubt about this song is great. But apart from this Tera Rang, Little Little, Tumne Mohabbat Hai, Rate Zara Si, Garda, and Toofan Si Kudi are also not useful. These songs are full of emotions, which deepen the effect of the film on you. All these songs have been written by lyricist Irshad Kamil and they are awesome.

Overall, your Christmas weekend will not be boring with ‘Atrangi Re‘. Atrangi Re is streamed on Disney Plus Hotstar.