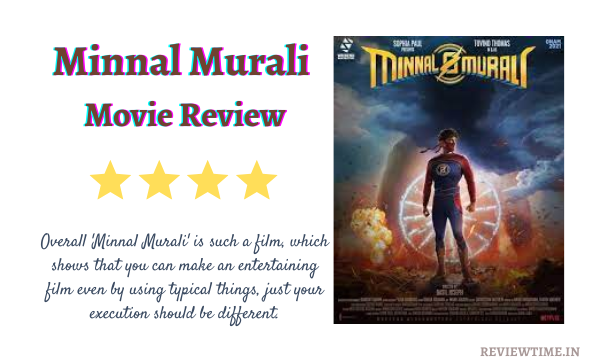 There is a new superhero in the market, ‘Minnal Murali‘. This first superhero of Malayalam cinema has directly hit his entry on Netflix. Seeing ‘Minnal Murali‘, things like whether he is a bird is he a plane will come to mind because the concept of superhero itself is foreign to itself. But here superheroes with foreign powers have been made indigenous. Whether successful or not, now we will talk about it.

The origin story of ‘Minnal Murali‘ is also no different from the rest of the heroes. Brother’s real name is Jason, he has a tailoring shop in a small village in Kerala. Abibas wears a Poma T-shirt and calls Adidas fake. Salman puts up posters of Aamir. Life is going on as normal but one night the world changes. When they get an electric shock. Powers come but their phase with great power comes with great responsibility is still time to come. What does Powers do with them after coming, and most importantly, which villain comes to fight with this hero in the story happening in the village, this is the story of the whole film.

As I mentioned, the concept of superheroes is not Indian. The film also does not seem to forget this thing. Tributes have been given to American Heroes at many points. Like when Jason is exploring his powers, his nephew helps him, acting like a sidekick. There is a scene in the film where after Jason’s careless behavior, his father explains to him, talks about responsibility and goodness. While watching this scene, the scene of Peter Parker and Uncle Ben constantly plays in the mind. The rest is Minnal Murali‘s costume, which again shows the influence of American Heroes.

Your hero is good as long as the villain of the story is strong. This is the reason why superhero movies like ‘The Dark Knight’ and ‘Black Panther’ are not considered just children’s movies. ‘Minnal Murali‘ also takes his villain seriously, giving him the same footage as the hero. The journey of Jason and Villain runs side by side throughout the film. Whether it is a failure in love or any other personal problem, we get to see both sides equally. The film doesn’t just treat its villain like a world-ending freak, he has been humanized. He has his own inner quirks, some flaws, which make him human, if not perfect.

The more conflicts or obstacles in the life of the rest of the hero, the more fun for the audience. The troubles of ‘Minnal Murali‘ also do not take the name of diminishing, sometimes there is a fear of identity coming to the fore and sometimes some other danger. In the second half of the film, something or the other constantly keeps coming in front of him. But, but, but the way all these obstacles wrap up, it seems a bit awkward. The film seems to be trying to wrap up its climax in a hurry. Which could have been better if given a little more space. The film may stagger a bit when it comes to the climax, but till that point it keeps you entertained continuously.

The fun vibe was coming from ‘Minnal Murali‘ after watching the trailer, the film retains that. Like when Jason is struck by lightning, he is in the costume of Santa Claus. Ongoing to the doctor, he says that Jason is bloating due to electric shock. Then a character standing nearby says that the pillow is pressed inside the costume. Such humor can be seen elsewhere. Like when Jason comes out as a superhero for the first time, that too at a children’s function. Starts washing the policemen, the child made Gandhi shouts that kill more. You would not expect an appeal for violence from a child who became Gandhi.

After seeing Tovino Thomas in this year’s ‘Kaala’, his different avatar is seen here. A boy who does not put many minds in things cries when he is alone, pretends to be in a chill mood when he goes in front of everyone. Like the superheroes that came before, Jason has a tragic past. Tovino rarely gets opportunities to show his emotional side, but he does the right thing in that too.