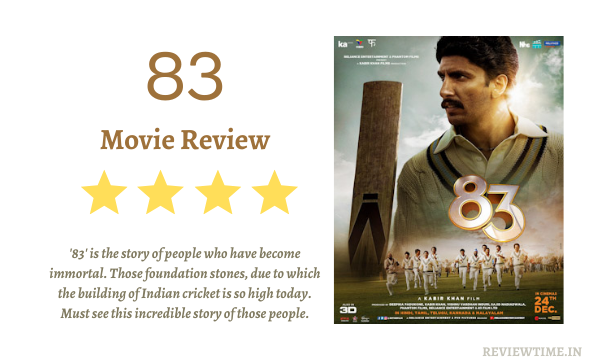 An incredible but amazing event like legends was the Indian cricket team winning the 1983 World Cup. Obviously, when the film was made on this story, it was bound to skyrocket the expectations. Can Kabir Khan’s ‘83‘ live up to those expectations? Let’s know.

‘83‘ is such a film, about whose story we will not be able to give any spoiler even if we want to. We all know the whole story. But what is known, how it has been presented on screen, this thing is important. And puts ‘83‘ century on this front. The ‘83‘ World Cup is a part of our memories. Most of us have not seen this World Cup. We have either read articles about him, seen pictures, or seen video footage available on YouTube. But in all these ways, we only got information. Became aware of a historical event. But we do not know how it would have been to live those moments. Kabir Khan’s ‘83‘ takes us through time travel and takes us to that era and you win that entire tournament for three and a half hours. This is the biggest achievement of this film.

Till now we had only heard or read that in 1983 Team India was an underdog, no one believed in it, etc. But what was the intensity of his struggle, we will be able to feel it by watching this film. Connecting the new generation to India’s one of the biggest sporting events in a personal way will prove to be the biggest achievement of this film.

‘83‘ Another bright side is its writing. The dialogues written by Sumit Arora and Kabir Khan will make you emotional and will also force you to whistle. There are many examples, like before leaving on Team India’s tour, the coach is jokingly asked, ‘This time it is not even East Africa, will you beat whom?’. In the two World Cups held before 83, India had won only one match. That too against a weak team named East Africa. The name of which no country exists at all. In light of this fact, that question pricks the coach as well as the audience.

Another example of smart writing is seen when a member of the Indian team gives a description of West Indies fast bowler Joel Garner. You look at the bowling attack of the West Indies from the writer’s point of view and you realize how big a task it must have been to fight them.

Similarly, in another scene, troubled by the derogatory words of the press, Team India wants their captain to answer it. Whatever the captain says in response to this demand, that scene has become amazing. Another example of good writing is that scene.

It would be unfair to proceed without mentioning the star cast of the film. It is clear that each and every actor has been carefully cast. Ranveer, Tahir Raj Bhasin, Jeeva, Saqib Saleem, Jatin Sarna, Chirag Patil, Hardy Sandhu, Ammy Virk, Nishant Dahiya, Adinath Kothare, Sahil Khattar, Dhairya Karva, Dinkar Sharma… all have entered their respective roles. To the extent that you will only see cricketers on screen the whole time, not actors. Ranveer Singh has done magic. He is engaged only and only Kapil. He has absorbed Kapil’s aggression inside himself. When he speaks, his aggression is visible, when he does not speak then they can feel it clearly in their eyes. Kapil’s spirit, Kapil’s fire is clearly reflected in Ranveer’s eyes. Even if this role is not considered to be the best of Ranveer’s career, it will definitely come in the top three.

Some scenes of the film have become very spectacular. Like comedy speech in Kapil’s team bus. Or the scene, when Srikkanth narrates a story while replying to a foreign journalist at a party. Or those scenes when Kapil does a great job and he himself does not know. He goes to the umpire and asks and the umpire gives a powerful answer of one line. I will not tell what was the answer. Feel it on screen. The film is full of sizzling moments. Many times your eyes will reach the verge of spilling, it is guaranteed.

The film’s Captain Kabir Khan deserves the Man of the Series award. He has not allowed a heard story to disintegrate till the end. He has managed to keep the audience hooked till the end. Also, he touches the right chord of the heart of the audience. I think this is the only thing that will be the reason for the success of this film. Aseem Mishra’s cinematography is also very good. The filming of cricket matches is done in such a way that the matches do not look fake. The real footage from above has been mixed very efficiently. Because of that, the matches start looking real right away.

It is not that there is no shortage in the film. There are a few things that can be counted in the account of deficiencies. Many wrong facts, at different places, unnecessary drama, etc. But the overall impact of the film is so strong that you happily ignore such things.

‘83‘ is the story of people who have become immortal. Those foundation stones, due to which the building of Indian cricket is so high today. Must see this incredible story of those people.