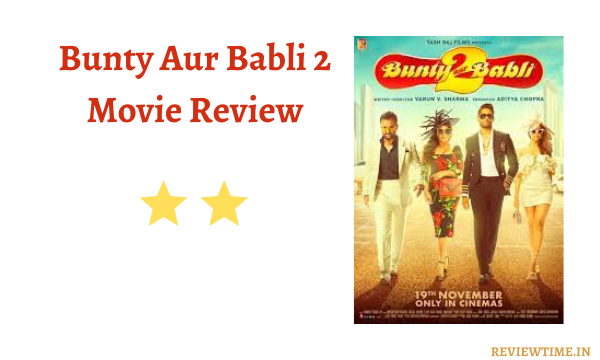 The sequel of the 2005 film ‘Bunty Aur Babli‘ ‘Bunty Aur Babli 2‘ has been released in theatres. The story of two people named Rakesh and Vimmi was shown in the original film. Both of them were pressurized by their family to lead a conventional life. But they had to do something different in life. So they started cheating people. Because they were enjoying it. Everything was going well but then both of them fell in love. The child is done. For the sake of the child, they distanced themself from the business of cheating.

The story of ‘Bunty Aur Babli 2‘ begins 16 years after the end of the original film. Because suddenly people are being cheated again in Uttar Pradesh. The style, the mood, everything is absolutely Bunty-Babli style. In such a situation, the police reach directly at the Lucknow residence of Rakesh Trivedi and Vimmi Saluja. Jatayu Singh is handling this case after the retirement of Dashrath Singh. Jatayu doubts less is more confident that all this is done by Bunty and Babli. But after the chain of events, they realize that someone else is cheating in the name of this infamous couple. In such a situation, he takes help from the original Bunty-Babli in catching the fake Bunty-Babli.

While watching ‘Bunty Aur Babli 2‘, it seems that it is made only to cash in on the success of the original film. Because there is nothing in this which is better or newer than the first film. Even the reason behind Sonia and Kunal i.e. Bunty-Babli getting into the fraud business of the new generation is like Rakesh and Vimmi. The first half of this film is spent establishing that the new Bunty-Babli are also very good thugs.

The film keeps throwing references from the original film at you in between. This is something that should have come in the film organically. But it gives a stuffy feel on most occasions. As if the film is telling you, remember this happened in the previous film also. This is a problematic issue. If we had to see what happened in the first film, we would have seen Bunty Aur Babli in 2005. What was the need for a new film?

The two new characters who have been entered in ‘Bunty Aur Babli 2‘. They are engineering pass outs Kunal and Sonia. The film does not bother to give any kind of backstory to them. He seemed to have been cast so that the film could be given a little millennial feel. It is a bit disappointing to see him in such a project after the performance that Siddhant Chaturvedi has given in his previous films. Because here he has nothing but fanboyish behavior. Gen-Z bubbly turned debutante Sharvari Waag. Sharvari seems quite confident about her debut film. Seeing her, it does not seem that she is trying to do something which she is doing for the first time.

In the original film, the role of Rakesh Trivedi i.e. Bunty was done by Abhishek Bachchan. Saif Ali Khan has been cast in his place in this film. Saif Ali Khan seems a bit awkward and uncomfortable while speaking in a UP accent. Rani Mukherjee owns this film. She is very loud and over the top. But this is the most special thing about that character. That’s why she looks funny. Looking at her, it seems as if the responsibility of taking forward the ‘Bunty Aur Babli’ franchise is on her shoulders.

‘Bunty Aur Babli 2‘ is overall an average film and a below-average sequel. This film cannot justify its existence. This is its biggest drawback. Any film is made by the hard work of a lot of people and spending a lot of money. Every film has a purpose. A film wants to tell a story. Wants to send a social message. A film is made for pure entertainment. But seeing ‘Bunty Aur Babli 2‘, it seems that it has been made with the aim of earning money on the basis of the popularity of the original film. Cinema is an art form. Money is such a secondary thing. But until the money does not come, the next film will not be made. This does not mean that the art form should be put on the backseat because of money. But seeing ‘Bunty Aur Babli 2‘ the same sentiment is felt.

However, if you want to watch ‘Bunty Aur Babli 2‘ because of the callback value of the original film, then it would be a better option for you to watch the original film. The temptation of the return of the public in theaters is on one side. But this does not mean that you create anything and blackmail the public with emotion and bring it to theatres.