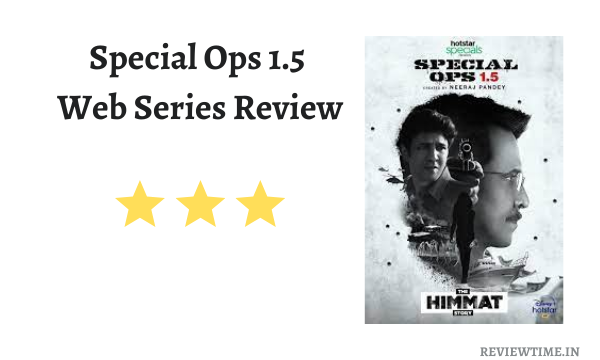 For those who have not seen the first season, let us tell you the small but important things of the last season. There is a RAW agent named Himmat Singh. The best officer of RAW is Himmat. His special people are Abbas Sheikh of the Delhi Police. Inquiry settles against Himmat in the last season, in which he tells about his big mission to two investigating officers.

Like the previous season of ‘Special Ops‘, this time too, the story runs in the narration style. In the last season, Himmat Singh was telling DK Banerjee and Naresh Chadha about the ‘Parliament Operation’. This time Abbas Sheikh is telling the story of Himmat Singh to both of them. The story begins in flashback with the first case of Himmat Singh. Officers posted in important posts of Intelligence and Defense are getting dead one after the other. In the initial investigation, the reason for their death comes as natural death, but later it is revealed that all of them have been victims of honey traps. Vicious girls have captured some very important documents of the country by trapping them in love.

I really liked the first season of ‘Special Ops‘. Since then I was waiting for its season 2. Today the wait is finally over. The best thing about this show is that Kay Kay Menon who performs is a pleasure to watch. This time in the first episode, Vinay Pathak comes in his familiar style, since then the mood is set. It seemed that the next four hours would pass in a great adventure. Vinay Pathak’s scenes in the first episode are very funny. Along with this, the ‘unpushed’ humor of the scene was also very good. After which the flashback story of Himmat Singh starts. Just get here the first minus point of the show.

In the show, KK Menon is shown young either through prosthetic makeup or through VFX. But it didn’t work out. Didn’t happen at all. The way Shahrukh was shown young in ‘Fan’ was very smooth. But as far as it is understood, here this work has been done with makeup. But that makeup is clearly visible. Throughout the show, KK is seen as if walking around with 950 grams of foundation on his face. The second minus point of the show is the jump cuts. The scenes that come between the present time from repeated flashbacks, pinch big.

As the story of Himmat progresses, it becomes very predictable. As soon as the first twist comes, you understand what is going to happen in the next episode. Himmat’s personal life on one hand is predictable, on the other hand, the hero-villain’s rivalry is even more predictable. In whose affair the thrill remains swirling throughout the show. Yes, the show does not fall into the category of boredom but still, the hopes that were raised after watching the first season got completely destroyed here.

KK Menon as Himmat Singh was strong but Himmat in Season 1 was more convincing. In the show, KK has done a character of almost 20 years younger than the last season. But KK with his performance and the prosthetic team with his make-up could not fill this gap. Leave no stone unturned in the rest of the KK scenes, this doesn’t happen. Abbas Sheikh’s role must have been routine work for Vinay Pathak. His filmography is full of such characters. Vinay also does not disappoint anywhere.

Adil Khan was decent in the role of Main Villain Maninder. He did not impress anywhere, so did not disappoint either. But in some scenes, he did not look smooth in front of the screen. Seeing them, it was clear that many people are standing in front of their eyes with big cameras. Aftab Shivdasani has appeared in a character role after a long time in the role of Vijay. Although there was no special graph of his character in this show, this will be considered as a good start to the second innings of his career. Aishwarya Sushmita also did a proper job in the role of Karishma who is honey trapping the officers.

‘Special Ops 1.5’ is written by Neeraj Pandey, Deepak Kingrani, and Benazir Ali Fida. This season was weak in comparison to the previous season in terms of writing. Neeraj Pandey’s style of writing was mismatched this time. Like the rest of his films, Neeraj has used real events as a backdrop in this story as well. That sounds a bit nice. Some of the dialogues in the show were good but there was none that would remain in my mind. The show has been directed by Neeraj and Shivam Nair.

If you have seen the previous season, then ‘Special Ops 1.5‘ will not be able to entertain you as much as compared to it. Since the first season, the show is being compared to ‘The Family Man’. Neither KK’s work in ‘Special Ops 1.5‘ will be considered as the best work, nor will this show be kept top in this genre. This show falls in the average category. If you want, you can watch it once.