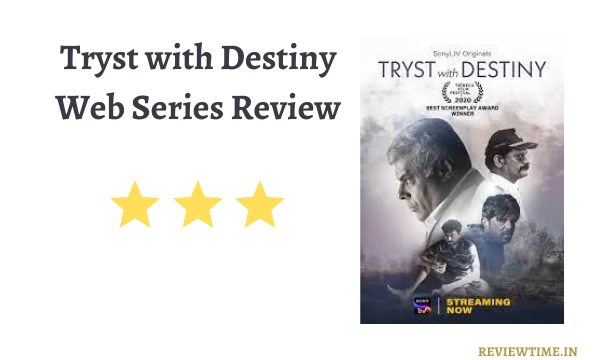 An anthology film has been released last Friday. The name is ‘Tryst with Destiny‘.

First of all, know from where the name of this film came. Many of you would also know the condition. After India got independence, when Pandit Jawaharlal Nehru gave a speech from the Red Fort for the first time, he started with this concern. Exploring the same concern of Pandit Nehru in today’s scenario, this film is a collage of top-class acting. Good actors have done a great job in this. Know one by one.

There are four stories in the film.

The first story is ‘Fair and Fine‘. Which underscores how much skin color matters in our society even today. There is an industrialist named Galava Mudiraj. owner of immeasurable wealth. Started the journey by selling tea and today is the top industrialist of the country. Whose name is very popular.

One day an accident happens to him in a five-star resort. He makes his way out the back door of the resort in an attempt to retrieve a trapped puppy. The rear door automatically closes. While trying to sneak back inside, Mudiraj is badly treated by the security guards. They insult him by calling him ‘Kalua’, ‘Kala Jamun’. They believe that this black man cannot be a big person. Mudiraj is shaken by this humiliation. The question haunts him that what is the use of earning so much wealth and fame? It cannot change skin color. With this in mind, the agitated Mudiraj takes a unique step. Will you know by watching this film?

Ashish Vidyarthi has not only been perfect casting in the role of Mudiraj, but he has also played this role with equal intensity. He has captured all the expressions like the arrogance of a billionaire, the frustration of a rejected person, the anger of a humiliated person with perfection. ‘Fair and Fine‘ once again establishes the fact that Ashish Vidyarthi is a capable actor.

The second story is ‘The River‘. You can call this story a muted version of pain. This is also its USP. There is a Dalit family in some unknown village. Husband and wife and two children. Both husband and wife are being harassed daily by the upper caste people. Both do not utter a word in the entire film. Only their facial expressions tell us what pain they are going through. The husband hears derogatory things from the villagers every day. The wife bears the brunt of physical abuse on a regular basis by the bullies of the village. Both are helpless. And perhaps because of this helplessness, they have become almost dumb. Can’t even talk to each other. Then one day both of them decide to be free. It is better if you know what happens next by watching this film.

The acting of Vineet Kumar and Kani Kusruti is top-notch. Expression of pain without the help of dialogues was a difficult task. Which both of them have done with great ease. Absolutely top-class performance of both.

The title of the third story is ‘One BHK‘. Story of a cop. Who in the love of a woman reaches the abyss by rolling down the stairs of morality from top to bottom. He has to buy a BHK flat for his girlfriend. Kuber is the only constable in the police department. Obviously, the income is limited, in which buying a flat is not possible. To what level does he go to fulfill his mission and whether his downfall is of any use to him, that is the story ahead.

Jaideep Ahlawat’s work is being viewed with new respect after ‘Paatallok’. He doesn’t disappoint here either. However, some glimpse of Hathiram Chaudhary is seen in his ‘Kuber’. Despite this, he has played the character of a depressed cop very well. Palomi Ghosh has supported her well in the character of Lakshmi. He has done a wonderful performance in a scene in the restaurant.

The last story takes you to the jungle. The name of the story is ‘A Beast Within‘. A man-eating lion has been caught in a village. The Lady Forest Officer has arrived to rescue him from the village. But he has to fall prey to the anger of a group in the village. These people want to take the life of the lion themselves. Because the lion had killed his close ones. The officer has to do duty and the villagers need revenge. What will be the result of this struggle, you will know by watching this film.

Amit Sial has done a great job in the role of Bhau, a villager who is burning in the fire of revenge. The anger arising out of losing someone is reflected in their whole body language. Gitanjali Thapa is Convincing in the role of Officer.

It is important to mention the cinematography of the film in a special way. Avinash Arun has captured some scenes so brilliantly, for him, breathing is the perfect adjective. Overall, ‘Tryst with Destiny‘ is a fine showcase of an infinite range of amazing actors. However, on the messaging front, the film seems to be falling short at times. Director Prashant Nair seems at some places to be unsuccessful in conveying his point properly. Despite this, this film can be seen due to the extraordinary work of the lead actors.