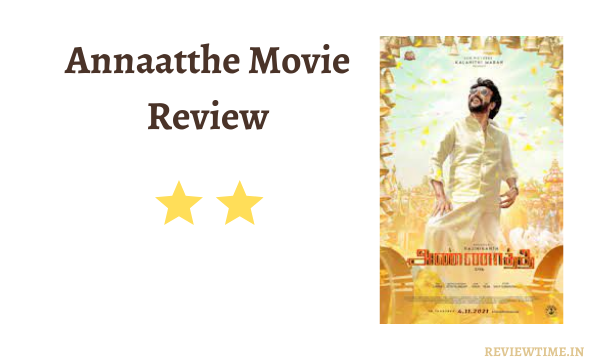 A big film in India is no less than a festival. And if there is a Rajinikanth’s film in that too, then understand that there is a prime festival. The craze to see this seventy-year-old youth on the big screen is no longer just a South-centric thing. Could Rajinikanth’s latest film ‘Annaatthe‘ make this grand welcome? This is what you will know today.

‘Annaatthe‘ starts with headlines of news channels. Where it is being told that a man named ‘Annaatthe‘ remains a customer of Kolkata’s biggest don’s life. A Tamil man is creating a ruckus in the whole city. The whole underworld is searching for Annaatthe. but why? Why is a Tamilian living so far away from his kingdom? It is learned that the don has done some harm to Annaatthe’s sister and because of this, Annaatthe is bent on destroying his sultanate. After this intro, the story reaches into a flashback. Directly in a village in Tamil Nadu, where Annaatthe left no stone unturned to make the world a paradise for his sister Meenakshi. The film calmly goes on to establish the brother-sister bonding and the larger-than-life character of Annaatthe.

Many films have been made on brother-sister bonding in the past as well. The people of the South have kept this subject as a separate genre. The character of an over-protective brother is not a new thing for the South. ‘Annaatthe‘ aka Kaalaiyaan is also one such brother. Annaatthe means elder brother. The love of a sister is such that when the sister studying in the city returns home, she welcomes all the passengers of the train by which she comes. Wants to get her married in a radius of five kilometers from the village so that whenever the sister needs, she can reach quickly.

Despite having such a strong bonding, when the sister really needs the brother’s support, she is unable to reach her brother. This is the weakest side of this story. You ask yourself that when there was such a strong relationship between brother and sister, then why is this happening on screen?

The film seems to be completely dependent on Rajinikanth. Understands that behind their vastness all the shortcomings will be hidden. After a long time, Rajinikanth was doing all that he had done in abundance in his Nineties films in this film. The character of a just, courageous, cheerful person living in the village. There is the same character in ‘Annaatthe‘ but that atmosphere of the village is missing. There are so many loopholes that make the film seem unbelievable with each passing moment. In ‘Annaatthe‘ an item named script is completely missing.

The first half of the film is a complete celebration. Celebration of Rajinikanth. His entry, his humor, his trained dialogues, his action. In the film, the characters around him and the audience sitting in front of the screen remain equally impressed.

Everything is loud in this world of Rajinikanth. Even the characters of two stalwart actresses who were forced to be part of the film to create nostalgia look ridiculous. Both Meena and Khushboo Sundar have been big names of Tamil cinema. Both have given many hit films with Rajinikanth. But both of them have been completely wasted in ‘Annaatthe‘.

Basically, ‘Annaatthe‘ seems to be a cocktail of many old Rajinikanth films. There was nothing to do in the film for anyone other than Rajinikanth. Keerthy Suresh’s role was long enough to say that but as per the script, she was not supposed to do anything other than cry out loud and remember her brother. The character of Nayantara was presented loudly but then the makers forgot her. A lawyer, who later became the sister’s caretaker and Rajini’s translator in Kolkata. Prakash Raj’s role is only till the interval, he does his work honestly.

The casting of Abhimanyu Singh in the role of Villain Manoj Parekar seems fine. He does all that a villain has to do in South’s masala films. Actually, in such films, everything is in favor of the hero. He dominates the entire film, not only in the climax. Everything goes according to him and he keeps on gathering applause scene after scene. Rajinikanth holds a double Ph.D. in this work. Obviously, he has done everything effortlessly. For this reason, his core fans will love this film, no doubt about it.

Rajinikanth’s fame is as much as it was thirty years ago. And there will be no doubt about it. If you are a Rajini fan, then you can watch ‘Annaatthe‘. Rather see. Others can skip if they want.