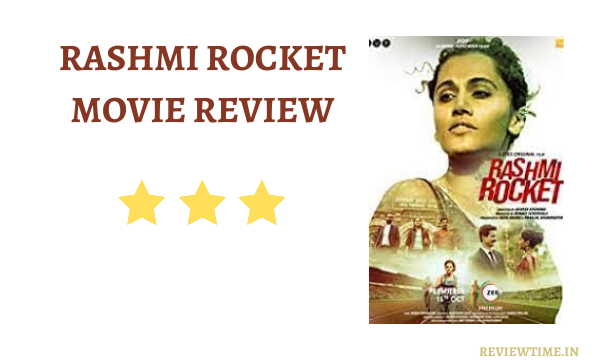 ‘Rashmi Rocket‘ has been released on ZEE5 on 15 October. Where actors like Taapsee Pannu, Priyanshu Painyuli, Abhishek Banerjee, and Supriya Pathak are in the lead. Akarsh Khurana has directed ‘Rashmi Rocket‘.

‘Rashmi Rocket‘ is the story of an athlete. There is a girl named Rashmi. She hails from Bhuj, Gujarat. Fast in-running since childhood. It runs in such a way that the people around are forced to stop and watch. Rashmi’s talent takes her to the Indian team. Where she wins medals for the country. becomes famous. But then her career falls down. When the association gets a gender test done on it. And alleges that he is actually a boy. This is not a spoiler, more or less part of it has been shown in the trailer.

Rashmi is a strong woman. Doesn’t get bogged down by anyone. Whether it is a boy or a girl, they fight over the wrong thing. Her attitude remains throughout the film. This seems necessary for the strong presence of her character. But it also had disadvantages. Rashmi passes the gender test. After which the media blows up all kinds of things about him. What trauma does a female athlete go through after the gender test? The film proved unsuccessful in showing that. During the test, Rashmi finds herself vulnerable for the first time. But her helplessness was only for so long.

That is to say when bad things happen to your hero, you find yourself attached to her journey. We wait till the end that he just gets justice. In Rashmi’s case, that connection could not be established. Neither Rashmi’s mood was captured properly. Nor should there be the cruelty of gender tests. Which was a major drawback. Everything goes cut-to-cut in this two-hour film. This story wanted to make the audience aware of the discrimination faced by female athletes. Wanted to show their trauma. The mind of the story was probably in the right place, but in the case of the heart, it gets killed. Emotional connect fails to set up.

Taapsee Pannu has played the character of Rashmi in the film. She has played the character of such a domineering type of woman in the past as well. There was nothing new here in that respect. Her monologue is at one place in the film. By the way, more scenes could have been kept. So that the horizon of her character can be increased. Priyanshu Painuli has played the role of her husband, Major Gagan. His character is always present for Rashmi. But he was not presented as Rashmi’s savior. Which was a plus point. Supriya Pathak played the role of Rashmi’s mother. She is also Rashmi’s strength and go-to person. She played both forms well.

The messaging of the film was good. But the writing could not deliver on it. We are not saying that ‘Rashmi Rocket’ is a completely negative film. But this is not a great film either. The movie can be viewed. It just could have been many times better than this.