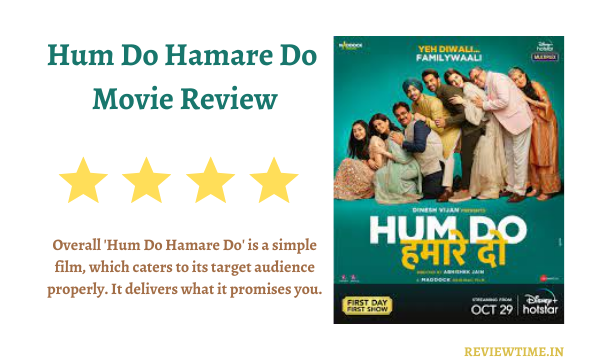 After a long time, such a film has been seen, which can be called worth watching. The name of this film released on Disney + Hotstar is ‘Hum Do Hamare Do‘.

Hum Do Hamare Do Movie Story:

Two people named Dhruv and Anya fall in love. But Anya wants a boy in life who has a proper family. But his hero i.e. Dhruv is an orphan. In such a situation, he looks for two people, who can play the role of his parents. So that he can get married to Anya. Those two people are Purushottam and Deepti. Years old separated lovers who are still waiting for each other’s love and being together. Finally, everything gets set. Dhruv creates a small and happy family to marry Anya. But all these people are not in sync with each other. Everyone is approaching their respective roles in their own way. Also, everyone has their own reasons and agenda for participating in this drama.

Hum Do Hamare Do Movie Cast:

Hum Do Hamare Do Movie Trailer:

Hum Do Hamare Do Movie Review:

Nowadays, in the name of comedy, we get to see jokes of clumsiness and coercion in films. But ‘Hum Do Hamare Do‘ completely focuses on situational comedy. The better it is written, the more beautifully it is played on camera.

Hum Do Hamare Do is a sweet rom-com. Don’t expect to say anything very serious or life-changing. But in today’s time, there is also a famine of a kind of romantic comedy. Because in every film you have to raise a relevant and stigma-related issue. He has to be involved in comedy. Those films perform at the box office. So it has become like a slot. ‘Hum Do Hamare Do‘ doesn’t try to break that slot. Nor does it try to be too different. Just what this film wants to do, it does it well. This is its USP.

Cinema is seen in two ways. First, cinema works in the mirror room of society. That is, it shows what is happening in society. The second definition of cinema is that it takes people away from reality in a world where everything is good. That is pure entertainment. ‘Hum Do Hamare Do‘ lives up to both these parameters. ‘Hum Do Hamare Do‘ made me feel good as an audience.

The dialogues of the film are absolutely in colloquial language. Hearing it, it seems that in that situation, what is being said, you would also say something similar. The background music is very soft, which is pleasing to the ears. The music of the film is exactly according to the formula. A romantic, a family, a sad and a party song. You choose from this buffet, what do you want to consume.

By the way, Rajkumar Rao and Kriti Sanon have done lead roles in this film. But this film is completely owned by Paresh Rawal and Ratna Pathak Shah. Paresh Rawal has performed amazingly in the role of Purushottam. In the matter of comic timing, it is still not a matter of any actor to hold Paresh Rawal’s hand. The woman this man is in love with is married. It is still being lived in hope and guilt. Purushottam has been camping in the town of Deepti for 10 years. His past is preventing him from approaching her again. The only purpose of his life is to get back the light. Whereas Deepti has progressed with time. Dhruv brings these two together once again.

Dhruv has become Rajkumar Rao. Rajkumar Rao is counted among the best actors in the country. It is not a big challenge for him to do such roles. Kriti Sanon plays his love interest Anya Mehra. A girl with a tragic backstory but enjoying life to the fullest. This character is the catalyst of this film, due to which things start happening and changing. Kriti has seen a lot of improvement since Mimi. However, ‘Hum Do Hamare Do‘ is the kind of film that bridges the gap between the lead and the supporting starcast. When your alleged hero-heroine goes into the background, you never know. Apart from these four, Aparshakti Khurana and Manurishi Chadha have also appeared in the film. Manu has done something out of comedy, which sounds good. But Aparshakti Khurana is constantly channeling his immense talent by becoming the best friend of the hero.

Overall ‘Hum Do Hamare Do‘ is a simple film, which caters to its target audience properly. It delivers what it promises you. You may not be able to remember it for a long time after watching it. But as long as this movie goes on, you enjoy that time.

Hum Do Hamare Do Movie Ratings: