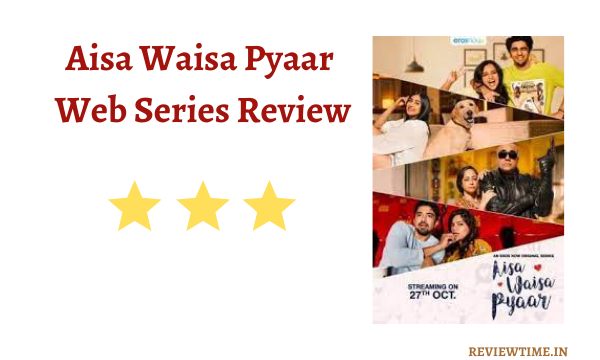 After Netflix and Amazon Prime Video, Eros Now has also come up with an anthology. The name of this series made by combining four short films is ‘Aisa Waisa Pyaar‘. Basically, this series talks about four different types of love stories.

The name of the first story is ‘Pyaar Dosti and Jimmy Paaji‘. It stars Preet Kamani and Ahsaas Chanana in lead roles. This story serves as a mirror to the concept of a boy and a girl can never be friends. But in a very in-your-face way. There are two friends, who share literally everything with each other. But when the girl goes on a date with another boy, the boy starts feeling jealous. He feels that he loves her. Izhar-e-Mohabbat happens. But both of them immediately realize that they were good friends.

But the most special thing about this story is Jimmy Shergill. Jimmy Shergill is one of the few under-rated actors in India. He is mentioned many times in this story. It seems as if they are being given a tribute. This feels great. Because we believe in Jimmy Shergill supremacy.

The name of the second story is- ‘Pyaar is a b*‘. Adah Sharma and Ahsaas Chanana have done lead roles in this. This story is of a girl, who was in a long time relationship with a fellow. But after the death of the boy, his mind gets tired of life. Becomes workaholic. Confidence is lost from love. In short, he does not have the courage to love someone again and bear the pain of losing him. But under the pressure of her younger sister, she decides to give life another chance. This is the story of optimism. It is a story of not being buried under your experiences, but of learning from them. Plus some of its scenes are funny.

The name of the third film is- ‘SRK Wala Pyar‘. Veteran actors like Rajit Kapoor, Sheeba Chadha have worked in this. Nidhi Singh is also a part of this story. This is the story of a married couple living together for 40 years. The never-ending love between them. Expected. This is a tragic love story, which does not end. A wife battling Alzheimer’s has forgotten everything. Your husband, your son, yourself. Her husband wakes up every morning and tries to bring back her lost memory with the same effort and love. Shahrukh Khan helps him in this. That man is a fan of Shahrukh. SRK’s film lines speak. Dresses like their characters. Instead of healing his ailing wife, he tries to love her as she is.

This is a very romantic story, seeing that you fall in love with the character of your husband. But you never want to be in his situation. This is what sets it apart from other stories. This is not inspirational, it is an inspirational love story. But due to the cheeky treatment, you do not feel the weight of sadness in that story.

The name of the fourth and last story of this anthology is ‘Pyaar Picture and Popcorn‘. In this, Saqib Saleem and Nidhi Singh have played the role of a couple. This story is based on the concept of ‘Opposite Attracts’. This is the story of two people, who are completely different from each other. But are in love with each other. It’s basically a little over the top and less sure. But well-performed and entertaining. Looking at this, it seems as if it did not put as much effort as the first three stories. The most disappointing joke is that angry and funny joke, which we have heard and seen so many times.

Talked about different stories! Now let’s talk about this anthology overall. Anthology films made in India so far have disappointed me. Be it on Netflix or Prime Video. Except Onir’s I Am and Netflix’s Lust Stories. ‘Aisa Waisa Pyaar‘ also maintains the same track record of Indian anthology. Seeing this, it cannot be said that this is a very strange and un-watchable series. But we should not set our standards according to the fact that the previous films were so bad that they look good. As long as we are satisfied with average content as an audience, we will continue to be served with average content. This thing has been written many times elsewhere. And then it should be written somewhere else until the improvement in the content being made here is not visible.

However, there is something in ‘Aisa Waisa Pyaar‘ that sets it apart from such an anthology. A character from every story in this series is carried forward to the next story. It gives a flow to the audience. It is as if someone has caught a string that holds it and moves forward. You will reach somewhere. See the rest for yourself and decide what is your opinion about this series.