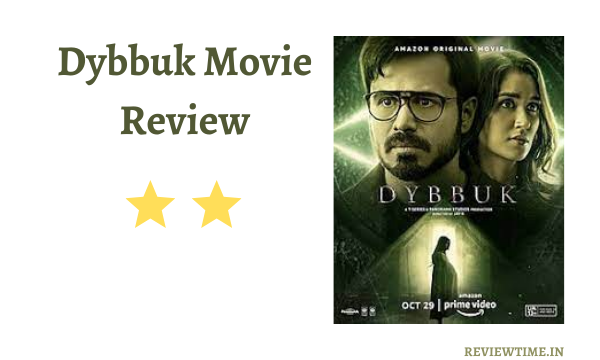 Emraan Hashmi and Ghost Stories. A Never-Ending Saga. Continuing the same immortal love, his new film has come, ‘Dybbuk‘. This word comes from Jew meaning Jewish Mythology. An evil spirit, whose purpose has remained unfulfilled, is called a dybbuk. Emraan Hashmi’s film is the official Hindi remake of the 2017 Malayalam film ‘Ezra’. There was Prithviraj Sukumaran in the lead. The director of the original film, Jayakrishnan has also directed the Hindi remake.

Sam and his wife Mahi leave India and shift to Mauritius. He starts living alone in a big house. After a few days, strange things start happening. To which science does not have the answer. A Rabbi is called to get rid of such incidents. Rabbi means Jew Spiritual Leader. The answer to the question of why that soul targeted Sam and his wife is the biggest plot point of the film. Emraan Hashmi played the role of Sam in the film. At the same time, his wife Mahi has become Nikita Dutta. Manav Kaul is in the role of Rabbi Marcus. But everything is secondary in the ghost story. Because the audience spends their time and money behind the ghost. How was the ghost of the film or its horror element, now we will talk about it?

There is one word in literature, trope. That is the theme that repeats again and again. Like in mindless action movies, the villain who ends the world without talking is a trope. Similarly, horror movies also have tropes. Like a strong wind blowing when a ghost comes. The rattle of photo frames hanging on the wall. Appearing to be glued to the wall or hanging from the wall as soon as you turn behind a character. Or any such character, who behaves in a strange way without talking. All these tropes are present in ‘Dybbuk‘. Which we have seen countless times before. So nothing new here in terms of ghost or horror elements.

When the volume suddenly increases in the scene from silent, you will get to see the jump scare of the ghost, that too on many occasions here. Some of the jumps scares in the film are fine. But if you have already seen a lot of horror movies, then you get an idea of what is going to happen now.

The selling point of ‘Dybbuk‘ was not his ghost, but the story built around jew mythology. The plot twist coming in the climax was, for which the entire film worked as a build-up. But unfortunately, the director could not build that anticipation. The ghost of the film has been brutally murdered by its poor editing. There are two points in the film where the story revolves. But they have been filmed and edited in such a way that their effect seems flat. This may not be the intention of the makers, but it is so.

The use of the camera in the rest of the film has also been done in a very unnecessary way. Like the rotation of the camera even in normal-looking shots. This was not done for the purpose of reflecting the mood of the characters in the story. It just seems like a stylish choice that seems to do more harm than good.

From the point of view of a horror film, ‘Dybbuk‘ is not a great film. You can watch it if you want to see it. Even if you skip, no doom will come.