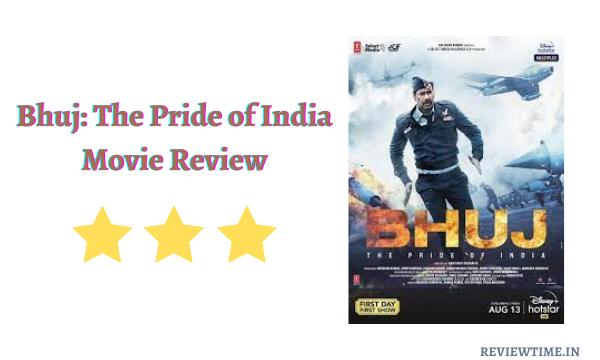 In 1971, there was a conflict between East and West Pakistan. The people of East Pakistan said that they were being harassed. In such a situation, India comes forward to help East Pakistan. Angered by this, West Pakistan attacks India. His plan was to capture some areas of India and bargain with them. That you leave our East Pakistan, we will leave your territory.

In this attempt, the Pakistani Air Force starts bombing all the airbases of India. The biggest loss in this is the Bhuj airbase. Which was an essential base for India’s strategy. Squadron leader Vijay Karnik was responsible for keeping it operational. But the problem was that Pakistan had ruined all the roads connecting Bhuj to other parts. Therefore, the soldiers were not able to reach to help Vijay. In such a situation, Vijay repairs the airstrip with the women of the nearby village and maintains the Bhuj airbase fit for landing.

Ajay Devgan has played the role of Vijay Karnik in the film. Ajay is considered a serious actor. That’s why the loud lines coming out of his mouth also make a serious sound. Therefore, despite the film being quite over the top, he plays Vijay’s character very easily. Because they are not doing this thing for the first time. He has played a hero in many films. In this film, he had to play only a real-life hero. Praneeta Subhash in the role of his wife. Recently he was seen in ‘Hungama 2’. Let me tell you, she hardly appears in five-six scenes of this film. But you do not get to hear a word from his mouth. And I am saying this literally.

Sanjay Dutt played the role of Army Scout Ranchoddas Pagi in the film. But from his introduction, his entire character is shaken. Whatever that man is saying, doing anything. But whatever that character is doing, he doesn’t believe it. Sonakshi Sinha plays a popular woman from a village near Bhuj Airbase, who is seen with great respect in the area. She persuades the women of the village to help Vijay in repairing the airstrip. But Sonakshi’s character is so dull, one tone and funny that what to say. Ammy Virk and Sharad Kelkar are the two actors who have decent things to do in the film. And both of them carry their characters well. Nora Fatehi has played the role of an Indian spy in the film, which does not make much sense according to the narrative.

Good things about the Movie:

This is the segment that took me the most time to write. Because I did not understand what to write in it. There is nothing in which there is no good. But ‘Bhuj – The Pride of India‘ has the ability to change your view. Well, what struck me the most about the film was its aerial combat scenes. The aerial combat scenes and sequences are absolutely thrilling. But in these scenes, you get to see second-class VFX work. Which ruins the fun. It can easily be said about ‘Bhuj – The Pride of India‘ that whatever is here, everything is in the sky. Metaphorically as well as literally.

Bad things about the Movie:

While watching ‘Bhuj‘, I found one thing very strange. A filmmaker chooses a story to tell because he must have found it entertaining. When you have faith in the entertainment factor of your story, then why spoil the taste by adding a lot of spices to it. In the case of ‘Bhuj‘, the makers had a ready-made first-class story. Just had to take it on screen with complete honesty. But there is so much filmy adulteration in this story that the story never seems real or convincing. The people of the film nowadays talk about the type of ‘Story is the King’ and ‘Our film’s hero story is’. But they are not ready to understand or implement this thing.

It is not necessary to show patriotism by thumping on everything. Patriotism is not something to be shouted at, it should be reflected in your intentions and actions.

One man kills hundreds of army soldiers armed with bullets and guns and all weapons with just an ax. Where the work of repairing the airstrip was to be done secretly. So that the Pakistani Air Force does not know. But here the airstrip is being repaired with full drums and dances. The hymn is being served. The hero of the film is professing to be Marathi in every other matter. On one hand, there is a war going on. People are being killed, on the other hand, after every five minutes, the senior officer is asking his junior – ‘Oh sadness in my lion’s eyes.’ Can’t understand what is happening in the picture!

Watching ‘Bhuj – The Pride of India‘ was a very disappointing experience for me. If we keep watching and praising bad films in the name of patriotism, we will continue to be shown the same. The producers will continue to earn money and the public will become mentally bankrupt. I want more and more people to watch this film and try to understand how war films should not be. You can stream ‘Bhuj the Pride of India‘ on Disney+Hotstar.

Bhuj: The Pride of India Movie Review
Spread the love

One thought on “Bhuj: The Pride of India Movie Review”