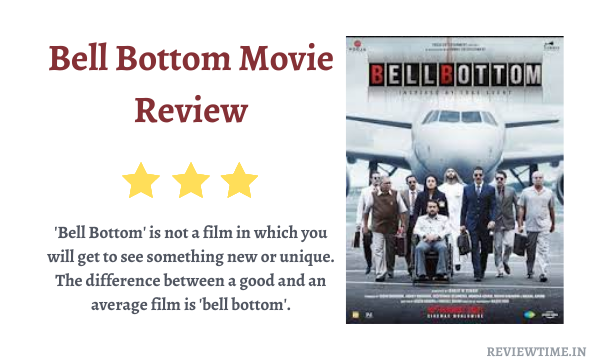 The story of the film is the same as we have seen in the trailer. In 1984, an Air India flight from New Delhi to Srinagar carrying 210 passengers was hijacked. This is the seventh hijacking in the last four-five years. Every time India used to negotiate with terrorists to save its people. By fulfilling the demands of the hijackers, he used to bring back his people safe.

But this time there is a RAW agent with the code name Bell Bottom, who gives the idea of doing a covert mission instead of negotiation. The then Prime Minister Indira Gandhi agrees to this. But Bell Bottom and his team are given less than 12 hours to carry out this mission. There are two major conflicts in this film. First, to find out who is doing such acts? Separatists living in India or Pakistan’s intelligence agency ISI. And secondly, how does Bell Bottom with his team rescue, 210 people, from these smart terrorists and bring them back?

In the film, Akshay Kumar played the role of a RAW agent named Bell Bottom aka Anshul Malhotra. A mentally strong but physically weak man, who wants to stop hijacking for a personal reason. Akshay Kumar tries to underplay in this entire film. But his one-liners don’t stop there. It seems as if he has withheld that joke for a long time. If you stay for a while, it will come out on its own. But overall, there is nothing in this character, which Akshay will find very difficult to play.

Vaani Kapoor is in the role of his wife. Her role is that of a filmy wife, which is in the film because the story is about her husband. However, at the end of the film, an attempt is made to make us realize that if the role of the wife was not there, the film would not have happened. But it doesn’t land properly.

Adil Hussain plays the mentor-handler of Bell Bottom. This character plays a big role in the planning and execution of this entire mission. Lara Dutta plays the then Prime Minister Indira Gandhi in the film. That character has become heavy. You never feel that Lara Dutta has done this role. This is where Lara Dutta’s work becomes successful. Huma Qureshi also appears in a small role in the film. Trying to present it impressively. But that cannot happen.

Good things about the Movie:

The best thing about ‘Bell Bottom‘ seems to be that it doesn’t make Akshay Kumar brand of loud patriotic cinema. There is obviously a patriotic feel with the film. But it does not seem to be imposed on the audience. This seems fine. No attempt has been made to punch every line. It is spoken in colloquial language. So things get better. The cinematography of the film looks new in the climax sequence. Despite the situation being quite make-believe, it is pleasing to the eyes. Surprisingly, the songs of Bell Bottom also match with the background of the characters. That thing is different that no song of the film is remembered.

The ‘bell bottom‘ moves in a very controlled manner despite carrying a huge scope of being swept away. Doesn’t go over the top. There is always such a danger in an average film that it tries to exaggerate its story or events. Bell bottom is fine in all these cases.

Bad things about the Movie

‘Bell Bottom‘ seems to be the story of a person more than the story of an event. Because the film takes a lot of time to explain why Anshul aka Bell Bottom is doing what he is doing. During this, you get to see full family drama. Overall it looks like a big flat film. Because most of the film happens in flashbacks. So there is very little space left in the film for the main story or event. This thing keeps bothering you continuously while watching the movie. You never feel compelled or bound by the film. Nor do you ever get the feeling of adrenaline rush or thrill. In this respect, this film disappoints.

If you’re looking for something new on an idea level, you just feel like you’ve arrived at the wrong address. An attempt is made to fit the films made on the mission of any Secret Service agent in a certain groove. Whatever be the commercial, the actor working in that film should also have the strongest department and also give a patriotic feel to the audience. ‘Bell Bottom‘ tries hard to break away from it. But it could not succeed in this. Despite the exciting and new story, the same worn-out regular treatment kills the soul of the film.

The feeling of going to the theaters and watching the film is different. One can go to theaters just to feel this feeling. ‘Bell Bottom‘ is not a film in which you will get to see something new or unique. The difference between a good and an average film is ‘bell bottom’.