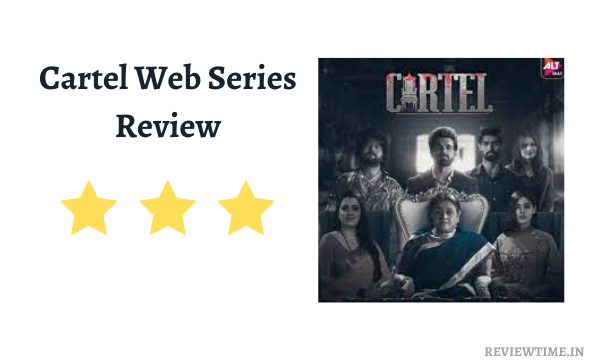 A new series has been released on MX player and ALT Balaji ‘Cartel‘. A crime drama show. There is a total of 14 episodes in the series. Was there anything new to see in ‘Cartel‘ among the thousands of crime-based web series available on the internet? Or the same old gangster stuff cooked up? Will talk about this further.

Mumbai is still in the possession of gangsters. Together these local gangs have divided the areas and gangs of Mumbai among themselves. Due to which there is no mutual gang war. Rani Mai, who rules the Aarey area of Mumbai, is behind this consent and partition. Rani Angre aka Rani Mai and her two nephews together have dominated the Angre gang in the city as well as on other gangs. She also has a son named Abhay Angre.

In this partition, the Dharavi area has come under Anna’s share. Gajraj operates Mumbai’s taxi, auto, and beggar rackets. Unlike other gang leaders, Gajraj lives like a common man. Simple shirt-pants and pouch in hand. In which there is always a gun. Gajraj does not seem dangerous to see but in reality, it is a lot. Mumbai’s biggest film and serial producer ‘Chairman’ handles the area of cricket match-fixing. Khan is responsible for smuggling arms and drugs. On the surface, there is reconciliation among all the gangs. But inside everyone intends to capture Aarey and get Rani Mai out of the way. Not only the Rival gang but also some Angre family members are involved in these ‘subs’. Gang war on the one hand, on the other hand, whether Rani Mai can maintain her dominance amidst family differences, is seen in the show.

From ‘Godfather’ to ‘Scarface’ and ‘Satya’ to ‘Once upon a time…’. This show’s story, direction style, and characters seem to be strongly inspired by these films. If that was the case, it would still go on. But there is more. From above, so many sub-plots start running in the middle of the show’s main story that doesn’t ask. In the very beginning, so many characters are introduced at once that the mind boggles. Some characters are good. He has a good story going on, the viewer must have noticed that the character disappears for two episodes.

The concept of the show is already quite worn out. Many scenes seem as if they have been ‘fit in’ forcibly. If someone helps in keeping the viewer connected to the show, then it is some actors. Due to whose performance, the broken interest in the show gets added again. Bharat-Saurabh’s background score in ‘Cartel‘ is quite good. But the editor has not used the score properly. The weakest link in ‘Cartel‘ is also editing. Prashant Panda’s editing in the show is very disappointing. By applying the same filter/animation, he has inserted flashback scenes so many times throughout the show that don’t even talk. There are many unnecessary scenes in the show, which if they were sorted on the editing table, the pace of the show would have increased. And the audience would be hooked to the show.

Supriya Pathak is in the role of ‘Cartel‘ godmother Rani Mai. Her scenes in the series are only ten percent. And these scenes are the highlight of this show. Jitendra Joshi is in the role of Madhukar Mhatre aka Madhu Bhau, the elder nephew of Rani Mai. The character of family man gangster Madhukar has been captured brilliantly by Jitendra. This character has acted as the backbone of this show. In the show, this character goes through a ‘Navras’ of acting. And one has to give praise to Jitendra who does not disappoint in any situation. Especially his comic timing has to be mentioned, which is very good. It was a different pleasure to see him in comic scenes.

Mai’s second nephew is Major Angre, gang leader. Tanuj Virwani, who worked in ‘Inside Edge’, is in this role. From a glance, Tanuj is the lead character in this show. He’s got a lot of screen time. He does not impress much in the whole show. But don’t disappoint either. Ritwik Dhanjani is in the role of Abhay Angre, the son of Rani Mai and eager to become a leader.

Here Shubrajyoti Barat, who plays the Bihari Mafia gangster, should be talked about separately. His character could have been too caricatured, but Shubhrajyoti Baraat saves the character from being cartoonish with his straightforward acting. The character of Khan, played by Anil George, seems as if Lala of ‘Mirzapur’ has been copy-pasted. Anil’s clothes, gestures all looked exactly like Lala of Mirzapur. Sameer Soni also appears in the show. Sameer Soni’s role is small but very effective.

The concept of the show is that of Ekta Kapoor. In which there is not much newness to be seen. Sambit Mishra is the writer of the show. Whose writing is weak. In such a long show, no such dialogue or scene has been so impactful that it makes a home in the mind. But praise is made here for Pulkit, the director of ‘Cartel‘. The way Pulkit has directed some scenes is commendable. Pulkit has made ‘Bose: Dead and Alive’ with Rajkummar Rao before this show. Pulkit will soon be working with ‘Scam 1992’ fame Prateek Gandhi as well.

The internet is full of crime-based shows. In such a situation, there is a lot of pressure of novelty on crime shows at this time and in the future. There is nothing new in ‘Cartel‘ but the story keeps getting interesting in-between. However, this ‘interesting’ element keeps coming and going in the story. Due to which the fun does not remain in the show and this show falls in the category of ‘average’ between good and bad. This is our opinion. The rest is yours. Let me give you more information. You will be able to watch this show only on your Android phone. The show is currently not available for other laptops, TVs, or iPhones.