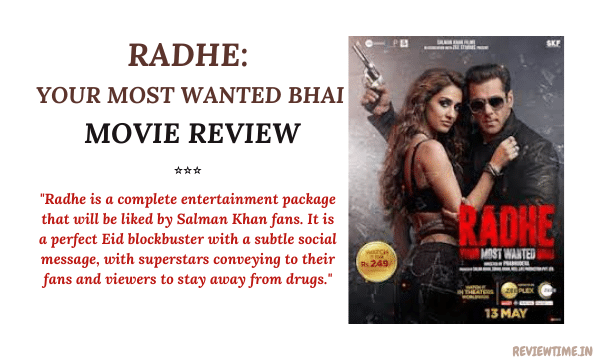 Eid has arrived and kept his commitment intact, Salman Khan has come to entertain the audience with ‘Radhe: Your Most Wanted Bhai’.

Set in the backdrop of the drug mafia in Mumbai, the film begins with Salman aka Radhe, who commits a child who has recently lost a friend to a drug overdose. The story is produced when Radhe starts searching for the maniac who is Randeep Hooda aka Rana. Rana wants to make Mumbai the drug capital of India. Will we see Salman Khan’s trademark shirtless avatar in Radhe? You have to watch the film to check this out.

The film’s story goes through a runtime of only 1 hour 54 minutes and the makers have rightly shared the story with action, thrill, drama, emotion, romance, and most importantly comedy. It is a complete package, which has all the elements for Salman Khan’s films. Radhe’s romance with Disha Patani aka Dia is full of freshness. The conversation with the character of senior Jackie Shroff is laughable.

However, the main attraction of the film is the fight between Radhe and Rana. The film’s negative character makes the hero more powerful and is a better-written villain in the Salman film. Whether it is a collision scene or hand-to-hand combat in the climax – their chemistry is amazing. There are scenes in the story that make you realize that this action thriller is a big-screen film for Salman Khan’s fans.

Radhe‘s music is like a refreshing breeze in the fiery narration and the lyrics – Seeti Maar, Dil De Diya, and Zoom Zoom – match well with the film. After a long time, an action film is equipped with several chartbusters. The dialogues of Vijay Maurya reflect Salman’s personality in Radhe‘s world.

Talking about performance, Radhe is completely Salman Khan’s film. He has nevertheless proved why he is the emperor of entertainment and can still do action, romance, dance with full vigor. He is one of the few stars whose mere presence brightens the big screen and Radhe is something like that. Salman Khan has found a strong rival in the form of Randeep Hooda. Randeep Hooda doing the first negative role of his career. Get ready to watch the smoke fight scene around the interval point. Disha Patani’s two dance numbers, Seeti Maar and Jhoom Jhoom are staring everyone with her chemistry with Salman. Gautam Gulati, Sangi, and Praveen Tarde are doing justice to their respective negative roles.

Radhe is a complete entertainment package that will be liked by Salman Khan fans. It is a perfect Eid blockbuster with a subtle social message, with superstars conveying to their fans and viewers to stay away from drugs.