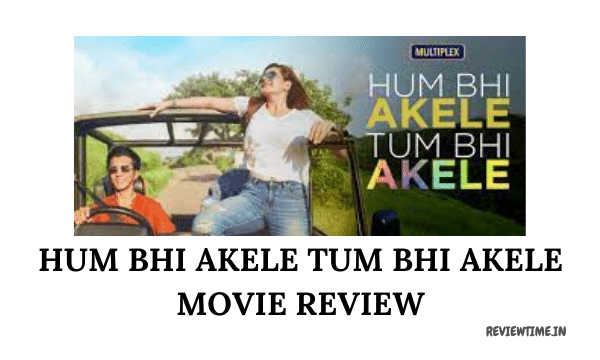 Hum Bhi Akele Tum Bhi Akele, directed by Harish Vyas, released on Disney Plus Hotstar is a romantic drama film with both of its main characters coming from the LGBT (Lesbian Gay Bisexual, and Transgender) community, ie Both male and female characters are gay. Anshuman Jha’s character is Veer Randhawa is a Gay, while Zareen Khan’s character Mansi is a Lesbian.

The story of ‘Hum Bhi Akele Tum Bhi Akele‘ starts with Zareen Khan’s character Mansi’s narration 369 days back from the current day. Mansi is from Meerut. Also, she is a lesbian. The parents know about this, but the father is sorry that he could not find a cure for it. A boy is being searched for Mansi’s wedding. After all, Mansi runs away from home and goes to Delhi. Mansi is an unassuming, reckless, and lively girl.

On the other hand, Anshuman Jha’s character Veer is a Gay and runs away from home on the day of his wedding and comes to Delhi to meet his lover Akshay (Gurfateh Pirzada). According to strict discipline and father’s will, Anshuman could never muster the courage to speak his mind to his family members.

Mansi and Veer meet in an LGBT club in Delhi and the friendship begins by getting to know each other. Married, Akshay accepts Veer’s love but refuses to be with him due to family, social, and business pressures. Veer breaks down. Mansi is going to McLeod Ganj to meet her girlfriend (Jahnavi Rawat).

Seeing the mental state of Veer, she offers to walk with him, which Veer accepts and both go on such a road trip. In this road trip, there are some such incidents with both of them, which change their attitude of life. Mansi’s girlfriend is unable to say her wish in front of her father. However, Mansi’s courage gives Veer courage and he is able to openly talk about his sexual orientation in front of his family. Mansi and Veer, who are lonely from their lovers, find shelter in each other.

After some time, Mansi’s girlfriend comes to her. But then an accident occurs and Mansi is challenged to choose one between her girlfriend and Veer. Whom does she choose, in this, the message of ‘Hum Bhi Akele Tum Bhi Akele‘ is also hidden.

Harish Vyas and Susan Fernandes have written the film. If you leave aside the sexual orientation of the characters of the film, at times it reminds me of Imtiaz Ali’s very popular film ‘Jab We Met’. The portrayal of the characters Mansi and Veer is reminiscent of Geet (Kareena Kapoor Khan) and Aditya (Shahid Kapoor).

Of course, the events of the two films are different, but their reasons seem to be similar. At the beginning of the film, it seems that the story will go on to talk decisively on the issue of social acceptability of gay and lesbian people, but the issue seems to be moving towards the climax and the film goes on a different track and wanders off.

The biggest highlight of this film is the acting of Zareen Khan. Zareen’s film career, which debuted as a traditional heroine in Hindi cinema from Salman Khan’s film Veer, may not have been very impressive, but Hum Bhi Akele Tum Bhi Akele also presents a different dimension to Zarin’s acting alone. Zarin is very comfortable in Mansi’s unfettered character. His impudence and recklessness are the life of this film, which was fully supported by the hesitance and sensitivity of Veer, the exact opposite character of Anshuman. The supporting cast of the film has performed well.

Dialogues are easy with common conversational humor. The songs of the film adapt to the circumstances and enhance the impact of the visuals. In particular, the use of ‘Bulla ki Jana’ in various emotional situations is good. There is a halt under the direction of Harish Vyas. There is no hurry to show the scenes. Due to this, the film’s departure is affected in some places, but this laxity is taken into account by the actors.