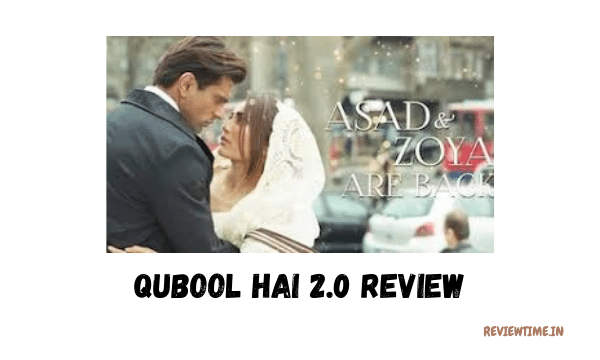 Asad Ahmed Khan and Zoya Farooqui have returned with the web series ‘Qubool Hai 2.0‘ streamed on Zee 5 on March 12. Along with this, some other characters have also returned, which the fans of ‘Qubool Hai’ will already know. However, this time the storyline of Asad and Zoya’s love story is different. ‘Qubool Hai 2.0‘ is a web adaptation of the serial ‘Qubool Hai’ aired on ZeeTV a few years back.

The main difference between ‘Qubool Hai’ and ‘Qubool Hai 2.0‘ is that ‘Qubool Hai’ was a Muslim social drama that tried to present the progressive face of society, while ‘Qubool Hai 2.0‘ was the homeland of the same society. Brings up the spirit of. The tussle between the two enemy countries and the conspiracy of love between conspiracies is also a major part of the story of ‘Qubool Hai 2.0’. Like the original series, Karan Singh Grover and Surabhi Jyoti also play the lead characters in the web version. ‘Qubool Hai 2.0‘ is a web series, so the land of the romance of Asad and Zoya is set in the first season. In the coming seasons, love will rise. However, this love is not going to be easy. The audience will get an idea of the climax of the first season.

Asad Ahmed Khan is an international-level rifle shooting champion. He lives in Delhi with his mother Dilshad and his sister Najma. However, this is not the only identity of Assad. There is an aspect of his personality, which his family does not even know. Zoya Farooqui is the daughter of Pakistan’s Defense Minister General Bakhtiar Farooqui.

Asad and Zoya have a dramatic meeting in Belgrade, where Asad has gone to attend a shooting championship, while Zoya has gone to her destination wedding. Zoya lives in London with her mother after General Bakhtiar left Zoya’s mother several years ago. Married Zoya is under family pressure and Ann runs away on occasion, in which she is assisted by friend Sana Shaikh.

After some dramatic events, Assad takes Zoya to her father in Islamabad. General Bakhtiar’s house is attacked, killing him. The situation becomes such that Assad agrees to marry Zoya. The two are about to leave for India when Zoya’s brother Hyder makes a disclosure that is going to be a major crisis for Assad and Zoya’s love story.

Qubool Hai 2.0 story-script is by Mrinal Abhigyan Jha. The story revolves between Delhi, Belgrade, and Islamabad. Since this is a spy series with a touch of romance, the screenplay is stretched in the same way to keep the suspense intact and every episode has some shocking revelations in front of the viewer. Several twists and turns make the story interesting. Especially, the turning point at the climax of the first season increases the audience’s uneasiness.

Talking about acting, Karan Singh Grover is fine in the role of a less talkative, disciplined, and serious Assad. At the same time, Surabhi Jyoti plays the character of talkative and Bindas Zoya with success. His scenes with Karan tickles. The good part of the series is that the romance between the two lead actors is not overblown so that the story does not go astray. Both artists have also introduced their expressions in a controlled manner. Mandira Bedi plays the head of the Indian Intelligence Agency. The look, getup, and portrayal of Mandira’s character would have made more impact if kept a bit ordinary.

Other artists have also worked according to their character and limitations. However, some scenes show a lack of directorial maturity. The weak acting of some supporting actors, except for the leading characters, reduces the seriousness of the scenes. Overall, this series is a different visual experience for ‘Qubool Hai’ fans.