1962 The War in The Hills Review, Cast, Trailer 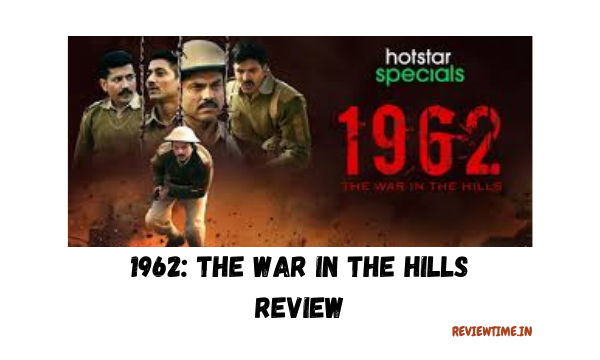 In this era of web series, what to make and how to make it is an important question. The topics are stacked and there is no dearth of platforms. There is a lack of right thinking. The 1962 war with China has been fondly remembered in the last few months. During the recent tensions between the two countries, it was repeatedly reiterated that this is the new India. China should not make the mistake of 1962. Some such incidents also came to light, in which, despite the defeat in the war, the valor stories of our soldiers were remembered. These include the might that defeated China’s plans to occupy the Chushul airstrip of Ladakh. When only 125 of our brave soldiers dusted off 3000 Chinese soldiers. Disney-Hotstar has brought this true incident in its web series ‘1962: The War in the Hills‘.

Mahesh Manjrekar is its director and Charudatta Acharya has written the series. But the difficulty is that the enthusiasm generated by listening to this incident gets colder while watching the series. The reason is that the entire incident has been spread and written and shown like raita. There is no tightening anywhere. Writer-director is strongly influenced by director JP Dutta’s brilliant film Border (1997). Here, along with the war, its background, political debate, the personal, domestic, and love stories of soldiers have been fiercely laid out.

It seems that they are making TV serials, not web series, in which the recruitment track along with the main story is run so that the chewing gum of the story remains. Keep the audience chewing. While the math of the web series is exactly the opposite. Need speed here. Which had a tremendous scope in this development of 1962. But the result of Manjrekar-Acharya’s jugalbandi led to the fact that it has become an important war sandwich between the events of the characters’ household, romance, love lettering, love triangle, engagement, and marriage.

Patriotism is the successful formula of the entertainment world if used properly. But this emotion cannot be forcibly created. In this context, Mahesh Manjrekar and his team prove to be a failure here. Neither is she able to instill a sense of patriotism and romance. What the writer-director mainly wants to show is not clear until the end, when the war-torn soldier finally returns home, like a worn-out Bollywood or mother-in-law, Marca TV drama, his pregnant girlfriend in the wedding pavilion She is traveling with someone else!

1962: There is a company in The War in the Hills, in which most of the soldiers are from Rewari (Haryana). Their leader is Major Suraj Rathod (Abhay Deol). A brave and fast decision-maker. Deol has joined Sumit Vyas, Akash Thosar, and Anoop Soni in the field here. While Mieng Chang appears as the Chinese commander. For the convenience of the audience, the director has called Hindi from the Chinese soldiers, officers, and all the characters here in a clean tone.

After continuous incursions into Assam, Arunachal, and Nafa (North-East Frontier Agency), China wants to seize Ladakh. Its leaders and military officers make a plan that Ladakh be defeated and defeated India. For this, he plans to win the Chuhul airstrip first. Their goal is to attack India on the occasion of Independence Day and give it a ‘gift’. But a mere 125 soldiers of the C Company led by Suraj Rathore thwart the intentions of 3000 Chinese soldiers.

The web series is unnecessarily long and its ten episodes range from 45 to 55 minutes. Those who keep the viewer away from the story-goal that he has come to expect. Abhay Deol and Mahi Gill, who appeared in the film Dev D (2009), did not hang out here. Mahi does not leave any effect. There is no strength in his character here either.

All the actors have done their work properly as soldiers. The director-writer has been successful in putting the 1962 era on screen, but this reason is not enough to watch the web series. Still, if you want to see the stories of love and business wrapped in the syrup of Patriotism, then this web series is for you.